Since learning about being able to walk in true divine health simply by realizing that we have all power and authority over sickness and disease due to Jesus Christ dying on the cross and rising again, I have been healed from all that the enemy has tried to come against me with since 2009.  It has truly been amazing for me to witness as I had no clue that Christians could do that before I was told about the greatest secret that the enemy does not want us to know about.  It is definitely something that the enemy wants to come against us learning about, and you do have to fight for it in your mind, as that is where the battlefield takes place.

Since the Lord told me back in 2009 that I could be healed from everything that the enemy tried to put on me the rest of my life, but ONLY if I did not get into fear, because once I got into fear I was on the enemy’s territory and there was nothing He could do to heal me at that point.  God said that all Christians could walk in divine health, but only if they did not get into fear, and learned about their authority over all sickness and disease.  He said that many say that they know their authority in Christ, but when the rubber hit the road, most do not. 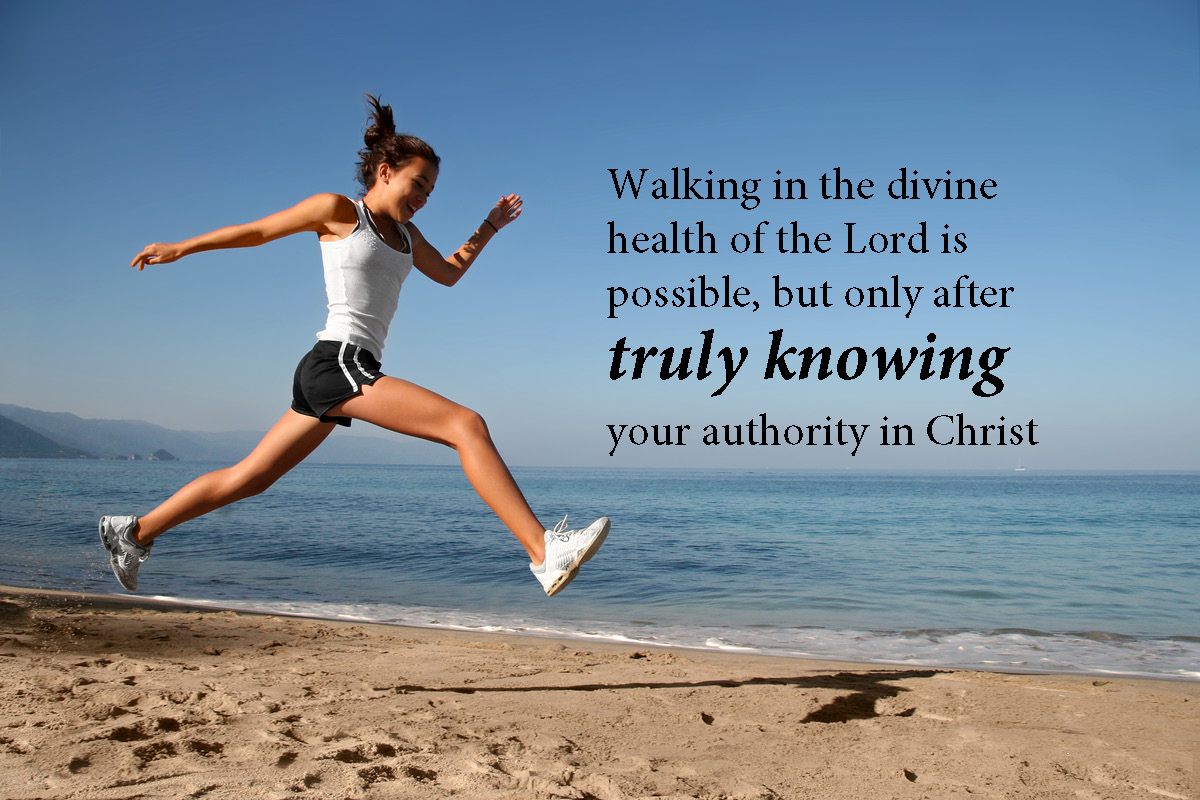 In the fall of 2013 I had developed a large bulge in the middle of my upper back that was quite painful and annoying.  I commanded it to go in Jesus name, but it persisted.  When I slept in bed on it, it felt like I was sleeping on a golf ball. When I drove my car I could feel it.  When my stepson had hugged me one time, he could feel it.  It was disgusting to me.  But I did not get into fear.  I knew it had to go.  After 5 weeks from suffering from it after I commanded it to go my wife started to have blurriness in her vision.  I asked the Lord what was happening and He told me that He was waiting to heal me because he wanted my wife to see the bulge and command it to go as something was going to come on her body similar to mine and she needed to have the faith to believe she would also get healed.

So I finally revealed to my wife my “battle of the bulge” and she was scared and thought it could be cancer.  I told her not to worry as the Lord wanted her to command it gone and I would command her blurriness gone and they would both go.  She we both commanded each other’s afflictions to go and counted it done.  Her vision immediately cleared up.  My bulge, however, persisted.  For 3 more days!  But I never got into fear.  Finally it started to shrink just a tiny bit, and continued to shrink over the next 3 weeks until finally dissolving gone.

I recently was ministering to a woman when I was out in LA who both she and her husband got major breakthroughs in a marriage that was heading towards divorce.  The Jezebel, Leviathan and Ahab spirits were in full force trying to get them to blame each other, instead of the real enemy of Satan.  They both got set free and saved their marriage.  Then she felt some strong enemy backlash as her veins in her arms and hands began to swell and it was quite scary for the woman.  I told her that it was simply the enemy trying to cause her to get into fear and that she simply needed to go to the beach and have fun, instead of fearing about the symptoms.

Unfortunately she got into fear and began to call around various doctors to see her. She had multiple tests done and everything came up negative.  The enemy was coming against her mind in a powerful way.  She finally called a vein specialist and after he looked at her condition told her “You need to simply go to the beach and enjoy yourself and stop worrying about these symptoms.”  Love it!  So you see, when the enemy causes you to look upon your symptoms and you get into fear, then he has you.  Jesus cannot heal you because you lost your faith.  So many Christians have no faith when it comes to divine healing, and run to their doctors as that is where their faith is in.

Since learning about my authority in 2009 I have been healed from every infirmity.  Toothache, slipped disc in my back, a golf ball sized bulge in my back, lungs that always got bronchitis and pneumonia every year for 12 straight years since getting pneumonia in Orange County, colds, more slipped discs in my back, etc.  I have not spent $1 on OTC medications, medicine, never even taken a Tylenol or ibuprofen.  Have not had any health insurance since the fall of 2012.  It is a process of changing your mindset from being healed from the doctor or chiropractor to walking in divine health from the Lord.  I now have medical doctors and chiropractors who refer their toughest cases to me and the Lord.

In order to obtain this level of health will require that you learn about your authority in Christ, make sure you break off all generational curses on you, are freed from any spirits such as the Jezebel or Leviathan spirits which cause you to operate against Christ behind closed doors.  But once you have learned this and walk in it, there is nothing that can compare as you are never in fear about any symptoms that the enemy tries to put on you.  It also saves you a lot of money that you can then use on kingdom purposes or other needs in life.  If I can learn this and walk in it, so can you.  But you will have to do some homework and the enemy will test you to see if you really know your authority in Christ, or just say that you do. You may even have to fast food for several days or weeks.  And eating healthy and exercising is needed, but you will naturally gravitate to doing that. But it is all worth it in the end as my life has been transformed forever.  Love you!