DISCERNMENT IS MORE IMPORTANT NOW THAN EVER!

Let’s face it – there are more people wearing spiritual (and physical) masks today than ever before.  So many people who attend church regularly, teach, prophesy, pastor, lead worship, and are in ministry act like they are the most godly, loving, compassionate and holy people in the world yet they behave in ways behind closed doors that are totally ungodly and God would have to say “I never knew you; depart from Me, you who practice lawlessness (sin)!”  I get calls and emails every week from pastors or pastor’s wives and others who would call themselves Christians asking me to help them because their wife or husband emotionally abused them for years and worse and they just cannot take it anymore. It is so hard to know who is legitimately a godly man or woman and who is involved in more sin than ever because of how good people are at acting nice. Its called being a fake Christian and there are millions around the world who attend church regularly.

The enemy knows his time is getting shorter and has been infiltrating God’s church for many, many years.  Satan is gearing up for the final war against God’s remnant and bride. There is a difference between God’s bride and the church.  Many would call themselves Christians but few are actually his bride and remnant who are consecrated to Him pursuing a life of holiness.  Most in the church are still operating out of their soul wounds which allow demons to torment their mind with thoughts, addictions and behaviors that cause them to sin and pursue their fleshly desires.  People must get their soul wounds healed from their past and pursue deliverance from operating in the enemy’s ways so they can walk in the Spirit with fruit of the Spirit (love, joy, peace, patience, kindness, goodness, faithfulness, gentleness and self-control).

Discernment is when you know that something or someone is either good or bad, godly or demonic, honest or a liar without having the source disclose it to you.  You just know in your spirit or have a good sense of the truth. The enemy’s goal is to appear good and godly and to befriend people who are in the church for a time only to later sabotage them in a way that they never saw coming that devastates and destabilizes them.   If they can hurt a person deep enough then they will often have such an anger, hatred and bitterness for them that they will never recover.  There are many people who are in the church who act like they are godly when truthfully, they have the most impure and ungodly hearts, motives and minds.  Their goal is to make themselves look good and have others look up to them and appear to be godly to gain the trust of people and ultimately influence their decisions and then shut down the true Holy Spirit from ever flowing in a positive way. 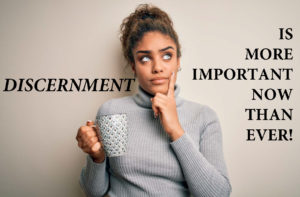 There are millions of people in the church who have an impure heart and wounds in their soul that have never been healed and are walking around hurting people deeply.  If they have never gotten their wounds healed and delivered from their demons then they receive thoughts from the enemy in their mind and hurt good people. The pride (Leviathan Spirit Job 41) in them wants people to look up to them and be impressed by the titles they call themselves (prophet, prophetess, apostle, bishop, pastor, etc.) and then they hurt more people who they do ministry over by lying and controlling them, and getting them to blame God for everything.

Discernment is needed now more than ever before as the enemy is in so many people who want to appear to look good but aren’t and the enemy has used them to convince people who are actually good to believe that they are bad so other people will not listen to them.  You see it in politics a lot where the media will come up with a false narrative about a good man or woman and then repeat it over and over again trying to convince the public and get others to come against the good person to hate on them.

So just how do you discern who and what is good and who and what is bad?  Often times experience is the best teacher.  Once you get into a relationship with someone who appears to be good but ultimately stabs you in the back, then you begin to pick up on the signs quicker for the next time around.  It is critical not to ignore the red flags.  Flags include the following:

God is cleaning up His church because there are so many people who are lying about who they really are and are hurting other people in the process.  God is exposing people who are deceivers and although it is not a fun process it is a very necessary one.  Many who are leaders in the church are being humbled as the truth comes out about them as they are losing their positions.  Then God is promoting people with his heart into the positions of leadership.

There are many people in the world who the media has convinced that President Trump is actually bad or evil when in reality the reasons why the Democrats and media and even some in the church hate him is because he takes action to do what is right and is in the process of bringing those who are doing evil to justice.  He is holding people accountable to a high standard of truth. He stands up for the unborn and against abortion, he stands against sex trafficking and is taking action, he is against pedophilia, he stands up for protecting the border of the United States from people entering illegally and hurting the U.S., he is against the Deep State and Cabal.  It is easier to discern when you look at the actions a person takes.  If they are doing what is more aligned with God then they are a godly person.   But if they are doing things that are against God’s ways, then you know they are not to be followed.   You can see how easy it would be for the Anti-Christ to deceive people today who are not close to the Lord and have minimal discernment.

Never before is it more imperative that people have a higher level of discernment to truly see what and who is good and bad.  Obviously if you have not gotten your soul wounds healed and delivered – then your demons that have legal right to torment you will convince you that other people who are doing evil things are good and you will think good and godly people are bad.  I know of one woman who calls herself an apostle who actually does witchcraft and curses people yet has thousands of people on Facebook who continue to think she is a godly woman and support her and attend her online school of ministry.  Then eventually after people follow the woman for a few weeks or months they finally discern that she is bad and ask why isn’t anyone doing anything about stopping her.  Well God is the one who ultimately makes the decision to shut down a person or put them on their sickbed as it says in Revelation 2:18-23 NKJV.

So ultimately, we all need to pray for a higher level of discernment so we don’t have to be burned by false apostles, pastors, prophets, people, friends, spouses, etc.  Keep in mind that everyone who is intent on hurting you has been hurt in their souls from their past and have not been healed yet.  Some of them will eventually choose to get their soul wounds healed and delivered from their demons while others will refuse and continue to walk in pride and hurt more people.  It’s our job to discern who can be trusted and who cannot and then stay away from those who cannot be trusted until the Lord tells you they have changed and pray for them to come to the end of themselves.