MANY IN THE CHURCH ARE PRACTICING WITCHCRAFT UNAWARE

Most people think that witchcraft is done by witches who wear tall black pointy hats, with green tinted faces and a wart, who cackle when they laugh and boil things like bats and newts in black cauldrons and cast spells on people and astral project to listen in on people’s conversations.  Yes there are some witches who could fit that description but there are far more who are doing witchcraft every day who look normal and are in leadership of most churches around the world as well as have their own ministries.  And many of them are also men.

Truth be told – at the simplest level – witchcraft is when one person tries to make another person do what they want which goes against what God wants for them (sometimes in very subtle ways while others are more overt).  It is not loving or true freedom to try to make a person do what you want them to do when it ultimately hurts them.  Controlling other people to do what you want is done by both men and women and is witchcraft. Where the spirit of the Lord is, there is freedom (2 Corinthians 3:17). The reason people control other people is because their souls (mind, will and emotions) were hurt when growing up and demons attached to their wounds and they hear voices from the enemy causing them to do bad things.  The spirit that causes people to do witchcraft and control other people is called Jezebel (1 and 2 Kings).

The spirit of Jezebel causes people to come into the church or ministries and try to position themselves into some type of leadership so they can start controlling others and shut down the Holy Spirit from flowing and cause all kinds of ungodly behavior and no righteousness or holiness. Jezebel causes people who are in ministry to lie about true godly people to hurt their good ministries and churches in order to shut them down. Many who do witchcraft will give people who have a godly or gentle spirit a tainted prophetic word or counsel to try and shift them out of doing what God wants them to do to doing minimal things for the Lord.   They often will say that they had a dream or vision about them and it actually comes against allowing them to flow in all their true giftings and callings.  Or they will say that they are more seasoned and godly and hear the Lord clearer to cause you to doubt what you actually heard from the Lord.  They often accuse you of the very same thing that they are operating in (saying you have pride or are operating in Jezebel when they are the ones who are). It can be very subtle or more overt. 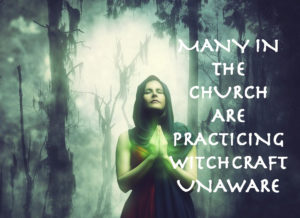 Those who have not had their soul wounds healed yet will walk in the flesh and are going to have fruit of the flesh in their lives as they are listening more to demons in their minds and behaving accordingly instead of the Lord or Holy Spirit.  The demons will tell them to control godly people to make them do what they want and convince them that they are justified for doing so as they see godly people as the enemy and partner with ungodly people who are hearing demons.  When a person is not delivered from tormenting demons in their mind they never see the fruit of the Spirit in their lives no matter how much they attend church as they will simply be acting in front of the church and not actually be a godly person behind closed doors.

So let’s list some things that people do which are witchcraft:

To be freed from operating in witchcraft a person needs to get their past soul wounds healed by Jesus and truly forgive all who have hurt them.  They can then command the demons who attached to them to go from those wounds.  They also need to repent for their own pride (spirit of Leviathan – Job 41) and the sins they have committed against people and God.  True freedom is worth fighting for so that we can walk in the fruit of the spirit and not the fruit of the flesh.  We want to hear “well done my good and faithful servant” and not Matthew 7:21-23: