There is nothing quite like true intimacy between two people in the context of marriage.  When one truly loves their spouse like Christ and wants to serve them, surprise them with their favorite coffee or music, make them breakfast in bed, take them on a picnic to a beautiful waterfall, mountain or stream, holds their hand on a walk in the park, go for a run together, walk on a beach, watching the sunset.  It is the simple things that mean everything to a person when another loves and cares for them and their heart.  When a person will sacrifice their own desires for another’s.  When their spouse listens to their heart and soul being shared and truly shows compassion and empathy. When one texts the other person that they love them which cultivates a feeling of genuine love. When a person loves and cares for them and treats them with respect during the day and week then it naturally leads to a beautiful intimacy in the bedroom that is everything that the Lord designed and is far better than anything Hollywood can produce.

Unfortunately for most couples there is no intimacy between them because of past soul wounds on both parties from when they were younger – which legally permits demonic spirits to speak to them in their thoughts and cause them to be selfish, sexually impure, ungodly, jealous, untrusting, angry, bitter, controlling, manipulative and prideful.  This ruins all intimacy between the couple and no matter how romantic you try to manufacture a night to be with your spouse – it never quite meets your high expectations because it ends up being just another night of mechanical sex which was completely void of any true intimacy.  It leaves both people wondering after it is over “is this all there is?”  Often it leads to a person crying and dying on the inside of their hearts desperate for true intimacy but never achieving it and eventually giving up hope that it will ever be possible as the relationships dies over time.

Hollywood and porn sites try to convince the world that a woman has to look a certain way with lots of makeup, showing her cleavage, dressing sexually, talking sexy, pursing her lips, having her eyebrows arched and wearing bright red lipstick with high heels and saying that is what a man wants.  Unfortunately the man that wants that is not at all a godly man and has demonic spirits of lust in him that tells him that only a porn star will satisfy his sexual desires.  But instead he never feels content or pure and nothing is ever good enough.  It ruins all intimacy between a man and wife.  It is sexually starved of all pure intimacy.  It is misery and feels like death. The only way to achieve true intimacy would be for both the husband and wife to be healed from their past impure sexual wounds and freed from their demons and then to pursue righteousness in Christ.  Then they will treat each with love and compassion throughout the day and week which will lead to a true intimacy in the bedroom that the world cannot come close to matching.  Couples who have both gotten their soul wounds healed have all said that their love lives are amazing after deliverance.  It is true intimacy unmatched from anything they have ever known before. 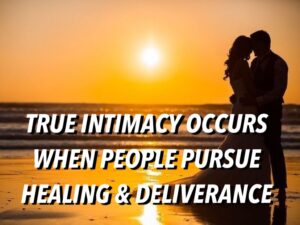 Women need to do the same thing – to remember back when they were first sexually violated or emotionally hurt (could be playing doctor, touched, molested, raped, etc.) by either a boy, man, girl or woman and close your eyes and describe what you felt.  Usually they feel guilt and shame and feeling violated.  Then command all demonic spirits to be separated from your soul.  Then ask Jesus to come give you a word of understanding of what happened.  Usually Jesus will tell you that you were an innocent girl and that the person who exposed the sexual material or touched you was also hurt and received demonic spirits which caused them to hurt you with it.  Then you can forgive the person who violated you and command all demonic spirits to be gone to the pit in Jesus name.  Then ask Jesus to give you a clean and pure heart and soul and to restore your childlike innocence.  You should then feel more clean and pure and lighter.

When a woman knows that she doesn’t have to perform to look like a Hollywood actress, porn star or model and that she feels truly loved by a godly and pure husband for her heart and soul then she feels peace in her heart and you can see it in her eyes which are the window to her soul (mind, will and emotions).  She can then enjoy her life.  She can exercise out of enjoyment and not pressure or performance.  She can eat the foods that she likes instead of feeling compelled out of fear that she has to eat only salads everyday counting calories missing out on the small pleasure of an ice cream or smoothie.  She is freed from the enemy’s lies and torment and will look younger as the peaceful countenance in her face is seen by all as she is glowing, happy and joyful.

So many people have been violated sexually and have no closeness with the Lord nor know how to pursue righteousness and holiness by getting their past soul wounds healed and demons delivered.  Instead they pursue the world’s ways which never lead to peace, purity and contentment in life.  I have done thousands of personal sessions for people and would estimate at least 95% of people have been wounded with an unhealthy view of sexuality by the time they were 18 years of age.  This haunts them for the rest of their lives as their relationships are unhealthy, tainted, perverted and unfulfilling.  So pursue inner healing and deliverance and enjoy an amazing life of peace, love and joy. When both husband and wife get freed from their wounds they have an amazing life of intimacy that they never thought possible.  Intimacy means “in to me see” and allows a person to connect on a level that draws them close to God and as both husband and wife draw closer to the Lord then they become more of one in the spirit which leads them to become one in the flesh at a much deeper level than anything the world can offer.