THE TIDE IS TURNING AGAINST THE ENEMY

So many people have been programmed to be “good little Christians” and to obey your leaders and rulers and do what you are told to do.  That if you disobey your leaders then you are sinning and will face the consequences of disobedience.   To never question what you are told to do and if you do then you are being rebellious.   This is what happened in round one of the pandemic back in April as most people believed what they were being fed because it appeared to be true what the liberal media was trying to convince the world of. Trying to instill an unhealthy fear that a virus with a 99.8% recovery rate is somehow the most feared situation the world has ever seen.   Trying to force healthy people to wear a mask for the first time in world history out of fear.  Now we can all see that this was simply a plan to try to force various states to accept mail-in ballots that would allow hundreds of thousands of fraudulent votes for Biden and to try to shut down businesses in the US so that Biden could force socialism upon the greatest country in the world – all financed by George Soros and other evil anti-American factions.  But now people with discernment are no longer being fooled and are standing up for our religious freedom and liberties and not allowing the country to be shut down for a second time.

Most people have given up that President Trump has a chance of winning because so many people with evil agendas are so stacked against the godly minority.  The Democrats have willing allies in the lying liberal media to cause people to believe lies and not know the truth.  They have large corporations with huge money and Big Tech social media companies censoring the truth. But it’s not over until God says it’s over.  God loves it the most when the enemy thinks they have won it but then the tide begins to turn and all of a sudden the enemy loses and the good guys end up winning. 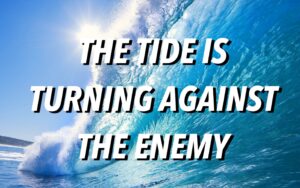 Remember when Haman built the gallows to kill Mordecai and was planning to annihilate all of the Jews and then suddenly the tide turned and Esther was told of Haman’s evil plot and she told the King and then Haman was hung on his own gallows and Mordecai was given Haman’s house to live in and took over his position?

Think about when the giant Goliath had challenged God’s people and mocked them over and over and it looked like certain death for all of Israel.  Then a young shepherd boy named David had the faith to believe that he could actually defeat Goliath because he had God on his side.  Then when the battle began it took David one attempt to kill Goliath and he let fly a rock from his slingshot and it hit Goliath in the temple and killed him on the spot – causing the other Philistines to scatter.

America is at a huge crossroad now as the world is bracing for what could be the greatest comeback and most dramatic changing of the tide ever.  When the tide changes – it happens quickly. The liberal lying media has already declared that Biden defeated Trump but the truth is that Trump has already defeated Biden.  Biden cheated in multiple ways with the Dominion voting system switching votes from Trump to Biden and fraudulent ballots being stuffed by democrats.   God is now ready to reveal the truth to the world.  He always waits until right before it appears that the enemy won to show off and expose the truth.  So get ready to watch another miracle comeback of epic proportions.  Will it go to the Supreme Court to be decided?

True Christians around the world are praying and fasting that the truth will be revealed and Trump will be announced the winner to save America from the socialists who want to destroy it.  God hears the prayers of the righteous and will not turn His face away from them while being far from the wicked.

29 The Lord is far from the wicked, But He hears the prayer of the righteous.

So thank the Lord for victory and expect that the tide is now turning against the evil ones. It is going to be a time of true celebration as the Lord knows that Trump won and soon the rest of the world will see as well.  Speak life boldly and never give up hope.  God loves it when the underdogs win what looks like a totally winless situation.   Prayer changes circumstances when we don’t give up and continue to speak life over a situation.