WHOSE REPORT ARE YOU BELIEVING? GOD OR THE LYING LIBERAL MEDIA?

It’s been an interesting time for Christians in America as the Lord has been telling His prophets that President Trump would be re-elected but if you listen to the liberal media and Democrats the circumstances look opposite.  But isn’t that just how God loves it.  When everything looks bad and then suddenly things get reversed and good overcomes evil.  David defeated Goliath when he was a teenager and Goliath was nearly 10 feet tall.   Moses led the Israelites out of their bondage in Egypt but then ran into the Red Sea and about 3 miles of water to cross as the Egyptians were chasing them to hunt them down.  Then suddenly the Lord told Moses to raise his arms and staff and the winds blew the Red Sea apart for the Israelites to cross over and then covered up the Egyptians killing everyone.  Daniel looked like he would be killed by the lions in the den but God protected him and those who devised an evil plan were thrown into the den along with their families and all died.  Haman had planned to exterminate all the Jews and then suddenly Queen Esther told the king of his evil plan and Haman hung on the gallows he built for Mordecai.

Christians in America are being tested as to whether they truly believe that President Trump will be re-elected or if Biden will get in after a massive effort of cheating, lying and death threats after their plan of corruption and evil is being exposed while covered up by the lying liberal media and censored by social media and corporate America.  Sadly many who attend church have no true godly faith whatsoever and are believing the negative report of the lying liberal media that Biden won and that it’s just a matter of time before he is inaugurated on January 20, 2021.  Interestingly when Moses sent spies into the land that God wanted the Israelites to possess a report came back from 10 of the 12 spies that caused the people to get in fear and they did not have the faith to believe that they could overcome the giants in the land which caused the people to die out in the desert except for the two who had faith (Caleb and Joshua – who actually led the children of those who died in the desert to conquer the people who had inhabited the land and take it for the Lord).

So many people of today are simply believing the lying reports of the media and Democrats and not listening to the Lord who is saying that President Trump will succeed in a second term to finish draining the swamp of all the evil and corruption.  What is really sad is that many “Christians” are not stating what God is saying.  They just want to give up and give in to those with evil intentions.  I have personally had 4 dreams since President Trump took office where I have had talks with President Trump and Melania about helping them to get people healed and delivered from their soul wounds and demons.  To truly get the church prepared for Christ’s return for His pure and spotless bride.  Therefore I must listen only to the Lord and not waste any time listening or watching the lying liberal media try to convince people of what Satan wants them to believe.  If you listen to what Satan is saying then you will never receive what the Lord wants to bless you with.  Your lack of faith restricts what God wants to do. 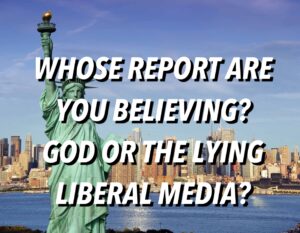 13 And the Lord spoke to Moses, saying, 2 “Send men to spy out the land of Canaan, which I am giving to the children of Israel; from each tribe of their fathers you shall send a man, every one a leader among them.”

16 These are the names of the men whom Moses sent to spy out the land. And Moses called Hoshea the son of Nun, Joshua.

17 Then Moses sent them to spy out the land of Canaan, and said to them, “Go up this way into the South, and go up to the mountains, 18 and see what the land is like: whether the people who dwell in it are strong or weak, few or many; 19 whether the land they dwell in is good or bad; whether the cities they inhabit are like camps or strongholds; 20 whether the land is rich or poor; and whether there are forests there or not. Be of good courage. And bring some of the fruit of the land.” Now the time was the season of the first ripe grapes.

21 So they went up and spied out the land from the Wilderness of Zin as far as Rehob, near the entrance of Hamath. 22 And they went up through the South and came to Hebron; Ahiman, Sheshai, and Talmai, the descendants of Anak, were there. (Now Hebron was built seven years before Zoan in Egypt.) 23 Then they came to the Valley of Eshcol, and there cut down a branch with one cluster of grapes; they carried it between two of them on a pole. They also brought some of the pomegranates and figs. 24 The place was called the Valley of Eshcol, because of the cluster which the men of Israel cut down there. 25 And they returned from spying out the land after forty days.

26 Now they departed and came back to Moses and Aaron and all the congregation of the children of Israel in the Wilderness of Paran, at Kadesh; they brought back word to them and to all the congregation, and showed them the fruit of the land. 27 Then they told him, and said: “We went to the land where you sent us. It truly flows with milk and honey, and this is its fruit. 28 Nevertheless the people who dwell in the land are strong; the cities are fortified and very large; moreover we saw the descendants of Anak there. 29 The Amalekites dwell in the land of the South; the Hittites, the Jebusites, and the Amorites dwell in the mountains; and the Canaanites dwell by the sea and along the banks of the Jordan.”

30 Then Caleb quieted the people before Moses, and said, “Let us go up at once and take possession, for we are well able to overcome it.”

31 But the men who had gone up with him said, “We are not able to go up against the people, for they are stronger than we.” 32 And they gave the children of Israel a bad report of the land which they had spied out, saying, “The land through which we have gone as spies is a land that devours its inhabitants, and all the people whom we saw in it are men of great stature. 33 There we saw the giants (the descendants of Anak came from the giants); and we were like grasshoppers in our own sight, and so we were in their sight.”

Death Sentence on the Rebels

26 And the Lord spoke to Moses and Aaron, saying, 27 “How long shall I bear with this evil congregation who complain against Me? I have heard the complaints which the children of Israel make against Me. 28 Say to them, ‘As I live,’ says the Lord, ‘just as you have spoken in My hearing, so I will do to you: 29 The carcasses of you who have complained against Me shall fall in this wilderness, all of you who were numbered, according to your entire number, from twenty years old and above. 30 Except for Caleb the son of Jephunneh and Joshua the son of Nun, you shall by no means enter the land which I swore I would make you dwell in. 31 But your little ones, whom you said would be victims, I will bring in, and they shall know the land which you have despised. 32 But as for you, your carcasses shall fall in this wilderness. 33 And your sons shall be shepherds in the wilderness forty years, and bear the brunt of your infidelity, until your carcasses are consumed in the wilderness. 34 According to the number of the days in which you spied out the land, forty days, for each day you shall bear your guilt one year, namely forty years, and you shall know My rejection. 35 I the Lord have spoken this. I will surely do so to all this evil congregation who are gathered together against Me. In this wilderness they shall be consumed, and there they shall die.’ ”

So it is critical to only listen to the Lord and God’s true prophets.  God has clearly made it known that President Trump is His man.  Trump is being used to drain the swamp of evil and corruption.  Unfortunately there are evil in both the Democrats and Republicans as well as many leaders in the church.  God is exposing all of this evil and needs a man who is not swayed by either party so he can do the right thing.  It is time to take a stand with President Trump and do the right thing.  There are many who are selling out to those who have evil intentions to see that America is shut down and taken over by China and other enemy countries.  Many people who are in positions of leadership in the Republican camp are scared when they get threatened or have their family get threatened if they stand up for doing the right thing.  Even the Supreme Court is afraid to do the right thing and hear the many corrupt cases of election fraud in many states.  So it is up to the true Christians…the Remnant Christians to stand strong and declare that justice will be served.  That God will expose the evil ones and keep Trump in place to finish the job that was started.  Jezebel hates it when the truth comes out and loves to threaten, mock and suppress the truth.  It is time to make Jezebel bow down on her knees to God.  True men and women of God stand up for Trump and God will honor you.

I continue to stand with what the Lord has shown me in my dreams.  The remnant Christians are small yet strong and mighty in faith and trusting in God to see this job get finished.  Continue to speak out loud the truth that President Trump will get re-elected and finish what God started.  The evil ones who hate Trump will mock you and make threats but God loves to show off and show up at the last minute.

The true Remnant Christians are looking for bold men and women of God who are not swayed by circumstances but will stand strong on what God says.  True godly men and women do not look upon any negative circumstances – or listen to the lying liberal media – they keep their eyes focused on the Lord.  Are you going to be the Israelites who got their eyes off God and listened to the bad report – or will you be like Joshua and Caleb and keep your eyes on God and be blessed with the fruit of possessing the land that God promised?