Many people want to only think of God as an all loving, look the other way on people’s sins and consequences for people’s actions, who tolerates those who abuse others emotionally while giving us hyper grace to get into heaven after we have died instead of holding us accountable for our behavior and lack of fruits of the spirit, and looking at the intentions of our hearts and minds.  But God is a God of justice and He knows the truth about all of us.  He knows how we treat our spouse and children and other people and it all matters.  He knows if we are emotionally, verbally, physically or sexually abusive or perverse.  And the Bible says he hates abuse, perversity, lying, and doing evil.  There are many people who abuse their spouse their entire marriage and unfortunately use the religious people in the church to protect them by shouting the “God hates divorce” scripture in order to keep them in their abusive marriage while ignoring the scriptures about their own abuse of their spouse which causes many to reluctantly desire to leave them so they can actually live and not die a slow pre-mature death. 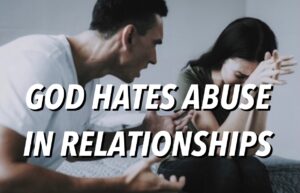 12 A worthless person, a wicked man, Walks with a perverse mouth; 13 He winks with his eyes, He shuffles his feet, He points with his fingers; 14 Perversity is in his heart, He devises evil continually, He sows discord. 15 Therefore his calamity shall come suddenly; Suddenly he shall be broken without remedy.

This scripture describes billions of people in the world (both men and women) who operate in secret, behind closed doors evil and many of them attend church every week.  This scripture describes all those who operate in the spirit of Jezebel and Leviathan. I have talked to thousands of people around the world who have been abused by people that this scripture describes and God hates it.  The abusers will twist scriptures telling their victims that God hates divorce if they are thinking of separating from them to escape the ongoing verbal abuse to survive  (as most are smart enough to realize that if they abused them physically that they would be looked down upon and give their victims a more sellable church-approved reason to leave).  The church will largely encourage the victims of abuse to tough it out and use scriptures about winning their spouse to the Lord which can happen but more often than not the abusive spouse will simply continue to verbally and emotionally abuse their spouse which causes their victim to get sicker and weaker physically and some have died staying too long as the demons in the abusive person only get stronger against them.  The reason most don’t change is because the church and leadership do nothing about inner healing and deliverance as they believe the lie that “Christians can’t be influenced by demons.” Yes, at times the abuser will do nice things and say loving things just to keep their victim from leaving (keeping them in the game) but they usually never get delivered from their demons because the church leaders or pastor will usually believe the abuser’s words of lies instead of the victim as the abuser will have many private conversations with the leaders or counselors and is great at “getting in good” with them, trying to become best buds with them and having them believe their lies so they will be their advocate and come against the true victim and tell them to do what their abuser says (give them more sex, do what the abuser wants, submit to their abuser, etc). Often times the pastor, counselors, leaders will realize that if they support the real victim that they will have to face the wrath of the abuser so it is an easier path to just agree with the abuser and wash their hands of trying to hold the abuser accountable.

God hates abuse, period.  Jesus hated when the Pharisees would abuse people in the church and there are millions of modern-day Pharisees today who are hurting people who are being abused by their spouse.

Restored to Freedom is seeing thousands of abusive people healed from their past wounds and delivered every year, but there are thousands more that refuse to get delivered and will only point the finger at their victims that they are abusing and lying about them and trying to act like they are the victim instead of the abuser.  God is giving the abusers time to repent but if they refuse to, then He will take action, sometimes suddenly, putting them on a sickbed and having negative consequences in their lives.  He wants those who choose to serve Him to be freed from the abuse so they can do what God wants them to do.  Those who are victims of abuse need to ask themselves after they have tried many times to help their abusive spouses to choose deliverance…who are you going to serve…the demons in your spouse or the Lord?  The demons in your spouse want to stop you from serving the Lord.

So God knows the truth of those who are abusing their victims and He will not tolerate it forever and he wants us to not tolerate it forever.  The goal of the demons is to keep you connected to them until “death do you part” (which many will get sickness and disease and die early by staying in a demonic controlled relationship).  The abusers will lie and say that they are “believers” so that they can get leaders in the church to believe that they are Christians when all the time they are nothing of the sort and have no good fruit in their lives as God knows the truth.  Even Satan believes that Jesus is the Christ.  But there must be fruit of the spirit in their lives to truly be a practicing believer otherwise they are only a “Christian in name only.”  The Lord looks upon our hearts and minds. They are actually an unbeliever because they do not practice being a true loving believer behind closed doors, they simply act like they are a believer in front of the church, and God knows the truth of who they are in private with their spouse.  They are like a Jekyll and Hyde.

10 I, the Lord, search the heart, I test the mind, Even to give every man according to his ways, According to the fruit of his doings.

And how should we treat people who refuse to humble themselves before the Lord and admit that they need help and continue to abuse their spouse and teach in the church or ministries?

So do not make your spouse an idol before the Lord.  If your spouse is evil and refuses to humble themselves and pursue deliverance then the Lord will not make you stay in the abuse forever causing you to do nothing or little for Him.  Often times when you stand up to your abuser the demons in them will become angrier but when they realize you are not going to bow down to them anymore and you are serious then they will either humble themselves to choose deliverance which is a win, or they will lie about you worse and blame you worse and try to ruin your reputation as they lose control of abusing you – but eventually you will have freedom to do what God wants for you and that will be a win as well.  Ahab did more evil in the sight of the Lord than all the kings prior because Jezebel stirred him up (and he did not stand up to her evil ways and tolerated her). It is never easy to break free from an abusive person because you have become accustomed to giving in and submitting to their demons but God wants you to choose to serve Him and not the demons in your spouse.  God ultimately wants everyone to choose inner healing and deliverance but cannot override anyone’s free will to choose.  People are influenced by demons from their wounds they received when growing up as they have not truly forgiven them from their hearts.  They have a lot of pride (Leviathan spirit in Job 41) that they need to humble themselves from so they can admit the truth about themselves and repent.  It is not easy breaking free from the Jezebel and Leviathan spirits but it is imperative if they want to go to heaven when they die.  God looks upon our fruit of the spirit, and our intentions of our hearts and minds, not our works.  If we aren’t loving, kind, gentle, patient, selfless and Christlike then we are not truly Christians according to Galatians 5:16-26 and will not inherit the kingdom of God operating in things of the flesh.

God is a loving God, but also a just God.  If you have evil fruit in your life and not good fruit, God knows.  Choose to get your past soul wounds healed and delivered from your demonic behavior and then you will truly be saved and will treat your spouse and children like Jesus would.