UNDERSTANDING HOW THE SPIRITS OF JEZEBEL, AHAB & LEVIATHAN AFFECT PEOPLE

People around the world all get hurt growing up in various ways.  Most are hurt emotionally through hurtful words from people (often their own father or mother, a step-parent, other relatives, siblings, friends, etc., ) and some are hurt through physical or sexual abuse (or simply being touched sexually from anyone or shown pornography).  When we get hurt we will remember what happened to us as the demons tell us over and over again how evil those people were who took advantage of us so that we cannot truly forgive them in our hearts which gives the demons legal rights to continue to speak to our minds, giving us negative thoughts of anger, fear, anxiety, depression, impure sexual desires, etc.  Then many of those who were wounded come into the church and never get their soul wounds healed or delivered from their demons and continue to hurt people (usually their spouse, children and certain people that they target in the church).  About 85% of marriages (and relationships) consist of one person who has the spirit of Jezebel and Leviathan and another who has Ahab.  They work in tandem with each other but never have true godly intimacy.  So to understand what people who operate in these demons look like it is important to know how they behave everyday: 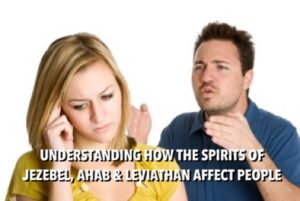 Most people will have various characteristics from all three of these spirits but will default to behaving more from the list from the spirit of Jezebel or Ahab.  So most in a relationship will see that one of the people will behave more like Jezebel and the other person more like Ahab.  You rarely see two people with the spirit of Jezebel or two like the spirit of Ahab getting married to each other. How do people who operate in these demonic spirits get delivered?  They must do four main things.

1) They must be completely honest with their sinful behavior before the Lord and not live in a lie, sugar coating themselves

2) They must choose to completely forgive all those who have ever hurt them which usually involves asking the Lord to show them from His perspective all who have done them wrong so they can understand all who have hurt them were also hurt.  Jesus died on the cross and said “Father forgive them for they know not what they do”

4) They must repent for the sin that they have done

I have hundreds of teaching videos on my YouTube channel that have helped thousands around the world to get healed and delivered.

Then they can command the demons that have tormented them to be gone and they will finally be able to operate in a true Christlike heart with the fruit of the spirit being evident in their lives (love, joy, peace, patience, kindness, gentleness, goodness, faithfulness, self-control).  When both a husband and a wife choose to get their soul wounds healed and delivered from their demons they will then experience true intimacy and few disagreements.  Everyone needs to choose to get healed and delivered in order to have true fruit of the spirit, good hearts and minds.

2 Replies to “UNDERSTANDING HOW THE SPIRITS OF JEZEBEL, AHAB & LEVIATHAN AFFECT PEOPLE”