HOW LONG WILL YOU TOLERATE SOMEONE’S UNGODLY CONTROL OVER YOU?

People who have sweet dispositions, good hearts and gentle spirits are prime targets for people who are more type A personalities who want to tell you what to do, how to do it, and are generally very controlling and ungodly people.   People who love to control and manipulate others will always have a stronger pride and will often act like they are godly but behind closed doors do very ungodly and worldly behavior.  They will try to convince their victims that they are in relationship with, that their victims are actually not good and need their help in order to live a good life as they are not capable of being godly without them.  They will twist scriptures. They will usually talk down to their victims, preying upon their victim’s weaker abilities to stand up to them and over time brainwash their victim into believing that they are much better people then their victim.  Those who are the weaker person would be walking in the Ahab spirit while the stronger, more controlling abuser would be operating in the Jezebel spirit.  Whenever you see a person operating in the Jezebel spirit you will be able to see whoever they marry take on the Ahab spirit.

Ahab’s feel more comfortable having other people call the shots because they want to be friends with everyone and don’t like being blamed for things going wrong.  They also like Jezebel’s because their controlling Jezebel will do the dirty work for them to get them what they want as all they have to do is raise their voice, get angry, have a tone and to go off on another person to get them to give in to them.  But Ahabs are tolerating ungodly behavior and God sees it.  God says “who are you going to serve…the demons in your Jezebel or Me?” 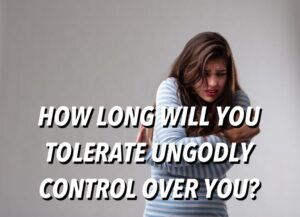 Remember the story in the Bible about when Ahab wanted Naboth’s vineyard but couldn’t get it and then Jezebel stepped in and got him what he wanted?

God said that Ahab did more evil in the sight of the Lord then all the other kings before him, because Jezebel stirred him up.  Ahab tolerated Jezebel’s evil behaviors of killing the prophets of the Lord, sacrificing babies to Molech, and attempting to kill Elijah.  Ahab did not stand up for God, but instead allowed Jezebel to do great evil.  There are billions of people who operate in the spirit of Ahab around the world and are allowing people with the spirit of Jezebel to do whatever they want instead of confronting them and saying no.  God will hold those of us accountable for allowing sinful behavior to occur under our noses and looking the other way.  There are many Ahab’s in the church today who simply look the other way and allow people to mock God, to sin sexually instead of walking in purity, to allow their children to watch evil movies, cuss, sexually sin and do absolutely nothing about it.  To allow their spouse to berate and mock them, causing them to feel like a eunuch and simply paying for all their evil and corrupt behavior.  Ahabs often fund their spouse’s Jezebellic behavior financially instead of saying no to them and holding them accountable.  They allow their Jezebels to make evil decisions that go against God and the Bible so that they can have sex with them, or avoid an argument for the millionth time.  It is time to confront your Jezebel and give them time to repent and if they refuse then stop allowing them to control you and make you do what their demons want and instead do what God is telling you to do.

God will hold us accountable for tolerating people with the spirit of Jezebel.  Enough is enough and it is time to stand up for righteousness and godly behavior.  It is not easy to stand up to ungodly people because of their ranting and raging, lying, accusations, and hateful attitudes, but it is totally necessary in order to serve the Lord.

It is time for everyone to stand up for the Lord and stop tolerating Jezebel, no matter what threats come your way.  You must choose to serve God then the demons of your Jezebel.  God knows when we tolerate sin and when we stand up for righteousness.  He will reward you if you choose to serve Him and you will be cursed if you tolerate sin. Do what is right in the Lord’s eyes.