STOP KICKING AGAINST THE GOADS

Acts 9:1-9 Then Saul, still breathing threats and murder against the disciples of the Lord, went to the high priest 2 and asked letters from him to the synagogues of Damascus, so that if he found any who were of the Way, whether men or women, he might bring them bound to Jerusalem.

3 As he journeyed he came near Damascus, and suddenly a light shone around him from heaven. 4 Then he fell to the ground, and heard a voice saying to him, “Saul, Saul, why are you persecuting Me?”

Then the Lord said, “I am Jesus, whom you are persecuting. It is hard for you to kick against the goads.”

6 So he, trembling and astonished, said, “Lord, what do You want me to do?”

Then the Lord said to him, “Arise and go into the city, and you will be told what you must do.”

7 And the men who journeyed with him stood speechless, hearing a voice but seeing no one. 8 Then Saul arose from the ground, and when his eyes were opened he saw no one. But they led him by the hand and brought him into Damascus. 9 And he was three days without sight, and neither ate nor drank.

We all know about how Saul persecuted and killed Christians believing he was doing what was right before he had his “Come to Jesus” meeting on the Damascus Road, being blinded and needing Ananias to pray for him to be healed.

How many of us have lived our lives our own selfish way, not wanting to obey the Lord?  We choose to participate in sexual sin, drinking, smoking, cussing, our closest friends living a sinful live, watching movies with sexuality and cursing and violence, living and dressing provocatively like the world.  The Lord is trying to get us to change and repent for a lifestyle that delivers no true peace nor any eternal value. The Lord whispering gently to you for you to change and follow Him more intently then you are now. 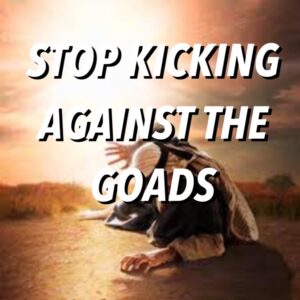 But you resist Him.  You kick against the goads.  What does that mean anyway?

Apparently, “to kick against the goads” was a common expression found in both Greek and Latin literature—, which rose from the practice of farmers goading their oxen in the fields. Though not familiar to us, everyone in that day understood its meaning.

Goads were typically made from slender pieces of timber, blunt on one end and pointed on the other. Farmers used the pointed end to urge a stubborn ox into motion. Occasionally, the beast would kick at the goad. The more the ox kicked, the more likely the goad would stab into the flesh of its leg, causing greater pain.

Saul’s conversion could appear to us as having been a sudden encounter with Christ. But based on the Lord’s expression regarding his kicking back, it appears that He’d been working on him for years, prodding and goading him.

I believe the Lord had been working on him for a while. Most likely, Saul had heard Jesus teach and preach in public places. Similar in age, they would have been contemporaries in a city Saul knew well and Jesus frequently visited.

Some make a commitment to serve the Lord but still live much like the world having much fruit of the flesh and not the Spirit.  They are not willing to lay down all their sin in their life for the Lord. What kind of a Christian is that?

Remember what happened to Jonah when he did not want to confront the people of Nineveh for their sin?  He was thrown off a boat into the belly of a whale for 3 days.  Ultimately Jonah gave in and did what the Lord wanted him to.  Then that city became the largest city in the world for several decades and is now named Mosul and is the largest Christian city in Iraq.

There are so many people who are “kicking against the goads” in their lives as the Lord wants them to do great things for Him and then to be blessed accordingly.  They are not enjoying their lives full of the flesh or living for the world and they will never be content until they do. Yes you have a freewill to choose to live how you want but if you never have true peace and godly contentment then what kind of life is it?  If you have no righteousness, sexual purity or holiness in your life then what is it worth eternally?

Then there are some who are living as closely to the Lord as they are able but the Lord is calling them to a higher level and they don’t want to do what needs to be done to answer His calling.  The Lord may be prodding you in order to get your attention that He needs you to do what you know you are being called to do.  God can make our circumstances worse if we do not heed His call.

So stop kicking against what the Lord wants you to do.  Then watch doors open up for you in many other significant ways in your life.  God wants to take things from you that are designed from the enemy to hurt you or keep you from experiencing true joy or limit you from the greater things God has for you.  He is not doing it to punish you but to help you. Stop living a life just for you and start living a life for the Lord in the way He wants and watch what happens. It is not an easy life to live for the Lord as we will be persecuted but it is far more rewarding and meaningful then living for the world or not stepping up to what the Lord wants.  It will be especially rewarding when you hear “Well done my good and faithful servant” when we are standing before Him at the pearly gates.

When we get our soul wounds healed and delivered from our demons we are free to do the things of the Lord. There is great freedom that awaits you.  Forgive everyone who has ever hurt you, repent for your pride and sin and watch the adventure of your life for the Lord begin!