Today the Lord showed me a vision of many, many millions of people in the world who are feeling more isolated and lonely than ever before in their lives.  Many have been abandoned, rejected, lied and gossiped about, abused, and that even God feels distant to them.  Some have self-sabotaged their own relationship because they were not healed from their soul wounds which caused them to have unforgiveness and bitterness in them allowing demonic strongholds rights to cause them to trigger on those who loved them causing them to pull away.  While others have had to escape from unhealthy controlling relationships of Jezebel which were intent on forcing them to do what Jezebel’s demonic spirits wanted and not what God wanted. They could no longer submit to the demons in those who had evil intentions for them.  Some are in toxic marriages with people who are not healed and delivered operating in the Jezebel spirit and being emotionally controlled and abused.  Some have children who have rejected their parents due to believing lies from the enemy through their ex-spouse or through connections through unhealthy friendships that their children have had. Some have friends who have all turned on them and have mocked and criticized them.

If you have chosen to obey God and pursued living a righteous life with the fruit of the spirit as He would want you to live then God says: “You have been set apart by Me.  It is by design for there are far more people who have aligned with those operating in the fruit of the flesh and demonic spirits who you can no longer be a part of.  I know it is lonely and you feel isolated but it is for your own good for so many in this world do not have your best interests at heart.  Many of you can no longer be closely connected to family members, church people, friends, business associates, even spouses – who are living for the world and have no intentions of changing – and not be affected negatively by them and their demons.  So many are not who they pretend to be.  They are modern day Pharisees, charlatans, hypocrites, snakes, and vipers who are selfish, sexually impure, corrupt, liars, and gossips, who do not love you and never loved Me.” 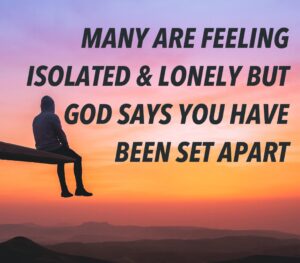 So understand that the sheep and goats are now being exposed for the world to see.  You simply cannot be in close relationships with those who have allowed sin to infiltrate their lives.  Just because a person says they are a Christian does not mean that they actually have any fruit of the spirit or have your best interests at heart. Satan has infiltrated the church and commandeered many of its leaders and attenders.  Therefore you will feel very isolated and alone but it is because there are few that have decided to live their lives for the Lord.

31 “But when the Son of Man comes in his glory, and all the angels with him, then he will sit upon his glorious throne. 32 All the nations will be gathered in his presence, and he will separate the people as a shepherd separates the sheep from the goats. 33 He will place the sheep at his right hand and the goats at his left.

34 “Then the King will say to those on his right, ‘Come, you who are blessed by my Father, inherit the Kingdom prepared for you from the creation of the world. 35 For I was hungry, and you fed me. I was thirsty, and you gave me a drink. I was a stranger, and you invited me into your home. 36 I was naked, and you gave me clothing. I was sick, and you cared for me. I was in prison, and you visited me.’

40 “And the King will say, ‘I tell you the truth, when you did it to one of the least of these my brothers and sisters,[c] you were doing it to me!’

44 “Then they will reply, ‘Lord, when did we ever see you hungry or thirsty or a stranger or naked or sick or in prison, and not help you?’

45 “And he will answer, ‘I tell you the truth, when you refused to help the least of these my brothers and sisters, you were refusing to help me.’

So understand that the spirit of Jezebel is running rampant throughout the world right now and is attacking God’s true remnant from all sides in every area of society.  Those with that spirit are in the churches and coming against those who truly want to do what is right.  Many are being kicked out of the church or told to sit down and shut their mouths due to those operating in Jezebel.  Many can’t find any good godly and righteous churches in their towns and cities.   Many cannot find any good people period in their towns and cities. Many have gone through emotionally abusive marriages and relationships to people with Jezebel and are mending from their wounds. Many have been hurt by toxic relationships with their father or mother or other family members or friends. While the feeling of being alone is hard, it is far better than being in a relationship with Jezebel and constantly being emotionally abused and berated and hated day after day.   Being forced to submit to their evil demands slowly trying to kill them legally through negative words to cause them to be depressed and have thoughts of suicide.

So take solace in knowing that there are millions of people who are in the same position as you and that God has you there for your own good.  A place of refuge and peace. Some who have been abused by their spouses have been waiting for a true Godly spouse and God says to encourage you that when you and they are ready that He will bring you your spouse far greater then you could imagine (like He did for me!).  Then every day you will enjoy love, peace and joy as you both have been healed from your past soul wounds and delivered from your demons so you can be on the same team moving forward. Some who have done the abusing need to repent to God, choose to forgive those who hurt them from their hearts, humble themselves and repent for their sin and command their demons to go.

Remember the story of Joseph.  Joseph was one of Jacob’s 12 sons. His father loved him more than any of the others and gave him a coat of many colors. His brothers were jealous of him and wanted to kill him but decided to sell him into slavery. He was taken to Egypt and eventually became steward to Potiphar, one of Pharaoh’s officials. Potiphar’s wife tried unsuccessfully to seduce him and after false accusations were levelled at Joseph he was imprisoned for 3 years. 3 years living in isolation from everyone with no hope of a future. But then due to his ability to interpret Pharaoh’s dream he was made governor of Egypt, #2 in command in all the land. He wisely rationed the country’s produce in preparation for a time of famine.

During the famine Jacob’s sons came to Egypt to plead with Joseph for supplies. They did not recognize him but after he was satisfied that they were reformed he identified himself with great joy. Joseph invited his father and brothers to come and settle in Egypt allowing them to save their lives. The story is recounted in Genesis 37, 39-45.  Many of you will be used to save your own families when they are desperate and will apologize to you for their control and scapegoating.  For some of you God is preparing a place for you to move to which will have the provision provided for you for the calling He has instilled in you from the persecution and sacrifice you have endured.

So keep your eye on Jesus and trust in Him.  Do your part by aligning your life with Jesus, with the same fruit of the spirit, humility, sexual purity, righteousness and understand that isolation can ultimately be a great season where you hear from the Lord, are blessed with great peace and then being prepared to come into your entire purpose for your life, suddenly.