SATAN HAS HIS DOUBLE AGENTS IN THE CHURCH

SATAN HAS HIS DOUBLE AGENTS IN THE CHURCH

Many of Satan’s people attend church, prophesy, teach, lead worship, preach and look ever so religious and spiritual, dressed in church appropriate clothing and are in their 40’s, 50’s and 60’s or older so you would never suspect that they could possibly be evil. Some of them pray in tongues (often demonic tongues), act like they intercede in prayer for others, but will seek out to mentor people who have been emotionally hurt and broken in their lives as they are easy targets. They act like they are being touched by the Holy Spirit (yet instead are snapping their heads back and forth and up and down and cackling like witches because of the Kundalini spirit), lay their hands on people acting like they are praying for them but are actually imparting demons to them, even acting like they are doing deliverance but instead giving people more demons instead of delivering them, have evil intentions in their heart and are set on trying to destroy God’s anointed people through accusations, lies and gossiping to as many who will listen to destroy their reputations and effectiveness in the church and their callings.

They accuse those who are actually godly and oppose them of being Jezebel all the while they are the ones operating in the spirit. They especially accuse women who appear more attractive or beautiful as being Jezebel because that is who the religious church convinces everyone what a Jezebel looks like. Satan’s double agents know that and will often make themselves look more holy and plain by wearing little to no makeup or dressing in ways that look like a typical church lady from the 1950’s.

They are very hard to spot because they know all the Christian lingo, are professional grade actors and actresses when it comes to appearing godly, dressing like a church lady or man, because image is everything to them, but the Lord sees through their false humility as their pride is great, knows they are sexually impure (porn, lust, sex outside of marriage, etc.), are selfish, mean and have no fruit of the spirit but lots of the flesh. They will act like an innocent victim if you dare try to expose that they are actually operating in evil. They try to stop couples that God is bringing together from getting married and will triangulate existing godly marriages to try to divide the spouses and turn them against each other so they will divorce. They operate in the spirits of Jezebel and Leviathan with strong religious spirits but try to appear godly and holy so no one will detect their true prideful heart posture. 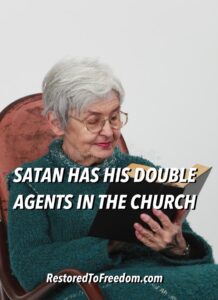 So what is a person to do? Sadly many are being forced to leave the church in order to escape from the damage of their lies and gossip to others in getting them to hate on their victims. The godly people are also leaving the church in order to live a life congruent with the Bible full of righteousness because so many in their church leadership preach messages that are not true saying that Christians cannot be affected by demons, that you can still sin like the world and God’s grace will let you into heaven, etc.

It’s like we are all living in a Hollywood movie of secret double agents where you aren’t quite sure if the people who act like they are godly and your friend are actually plotting how to lie about you to as many as possible in order to destroy your reputation behind closed doors so that everyone thinks you are evil instead of good. They want to destroy you and stop what God is doing through you.

The lines are blurring between those who appear to be godly but are actually your biggest enemy living a life full of their flesh, control and sin. So how is a person to know who is good and who is bad? The best indicator is asking the Lord to show you. Sometimes the Lord will give you a dream and sometimes He will speak to you in your thoughts the truth of a person. Many who are church attenders who still have many wounds in their soul will side with those who are spreading the lies and doing evil because they have demons in common with them. Birds of a feather flock together. Those with demons will team up against the godly people in order to drive them out from their church and stopping the true Holy Spirit from flowing. Many times those who are operating in evil and witchcraft in the church will have to leave churches every couple of years because they are discovered by the pastor and must start over in a new church to work their way up into leadership again.

There is a very real spiritual war that is going on in the church and most churches are a war zone with evil trying to stop good. Evil people lying about good people to turn others away from them and trying to get the good people to leave. It’s a challenge being a godly pastor of a church more than ever today. So we need to pray for pastors more than ever today to discern who is godly and who is not because the ungodly will always try to “get in good” with the leaders of a church so that they can operate and have their protection so anyone who they hurt will not be believed if they come forward to tell the pastor.

One deliverance minister was attending a local church and discerned a woman was praying in demonic tongues but the church’s senior pastor was oblivious to her. The deliverance minister asked the pastor about the woman and the pastor said the woman was his lead prayer intercessor. So the deliverance minister told him that she was praying in demonic tongues and then prayed for the pastor to hear what she was actually praying. The pastor then heard the woman’s tongues in English and could hear she was literally cursing out loud horribly and also speaking curses against him and the church. So he confronted the lady and she reacted by taking an offense acting like she was a victim and refused to get delivered. So he told her she had to leave his church. So it is time more than ever for the godly leaders in the church to stop tolerating evil and either get the people delivered or have them leave or else their church will suffer and often have the godly people leave and be left with those who are evil and tolerate evil to run the church.

““Beware of false prophets, who come to you in sheep’s clothing, but inwardly they are ravenous wolves. You will know them by their fruits. Do men gather grapes from thornbushes or figs from thistles? Even so, every good tree bears good fruit, but a bad tree bears bad fruit. A good tree cannot bear bad fruit, nor can a bad tree bear good fruit. Every tree that does not bear good fruit is cut down and thrown into the fire. Therefore by their fruits you will know them.” ‭‭Matthew‬ ‭7:15-20‬ ‭NKJV‬‬

“Who is wise and understanding among you? Let him show by good conduct that his works are done in the meekness of wisdom. But if you have bitter envy and self-seeking in your hearts, do not boast and lie against the truth. This wisdom does not descend from above, but is earthly, sensual, demonic. For where envy and self-seeking exist, confusion and every evil thing are there. But the wisdom that is from above is first pure, then peaceable, gentle, willing to yield, full of mercy and good fruits, without partiality and without hypocrisy. Now the fruit of righteousness is sown in peace by those who make peace.” ‭‭James‬ ‭3:13-18‬ ‭NKJV‬‬

“But know this, that in the last days perilous times will come: For men will be lovers of themselves, lovers of money, boasters, proud, blasphemers, disobedient to parents, unthankful, unholy, unloving, unforgiving, slanderers, without self-control, brutal, despisers of good, traitors, headstrong, haughty, lovers of pleasure rather than lovers of God, having a form of godliness but denying its power. And from such people turn away! For of this sort are those who creep into households and make captives of gullible women loaded down with sins, led away by various lusts, always learning and never able to come to the knowledge of the truth. Now as Jannes and Jambres resisted Moses, so do these also resist the truth: men of corrupt minds, disapproved concerning the faith; but they will progress no further, for their folly will be manifest to all, as theirs also was.” ‭‭II Timothy‬ ‭3:1-9‬ ‭NKJV‬‬

“These six things the Lord hates, Yes, seven are an abomination to Him: A proud look, A lying tongue, Hands that shed innocent blood, A heart that devises wicked plans, Feet that are swift in running to evil, A false witness who speaks lies, And one who sows discord among brethren.” ‭‭Proverbs‬ ‭6:16-19‬ ‭NKJV‬‬

““And to the angel of the church in Thyatira write, ‘These things says the Son of God, who has eyes like a flame of fire, and His feet like fine brass: “I know your works, love, service, faith, and your patience; and as for your works, the last are more than the first. Nevertheless I have a few things against you, because you allow that woman Jezebel, who calls herself a prophetess, to teach and seduce My servants to commit sexual immorality and eat things sacrificed to idols. And I gave her time to repent of her sexual immorality, and she did not repent. Indeed I will cast her into a sickbed, and those who commit adultery with her into great tribulation, unless they repent of their deeds. I will kill her children with death, and all the churches shall know that I am He who searches the minds and hearts. And I will give to each one of you according to your works.” ‭‭Revelation‬ ‭2:18-23‬ ‭NKJV‬‬

2 Replies to “SATAN HAS HIS DOUBLE AGENTS IN THE CHURCH”