THE IMPORTANCE OF MARRYING A DELIVERED BELIEVER

THE IMPORTANCE OF MARRYING A DELIVERED BELIEVER

It is common for couples to date for several months to a year and then within 3 weeks of getting married one of them changes dramatically. One of them becomes very controlling, jealous of others, demanding, prideful and sneaks around behaving in ways they don’t want their spouse to know what they are doing. It’s like the spouse’s personality changed once they had you committed to marriage. So what happened?

What happened was the spouse who dramatically changed to the worse had an alternate personality which they hid until they officially had you committed to marriage to them. They had prior soul wounds from childhood which were never healed that allowed demons to attach to them giving them many thoughts to which they trigger if you look or sound like a person or situation from their past that hurt them.

The spouse could be Spirit filled and pray in tongues and prophesy but if they still have not forgiven all who hurt them from their hearts and asked God to take their pride from them and repented for their sin and got delivered from the demons that attached to their soul then they will trigger and become a mean person who wants to control their spouse and hurt them for how they were wounded in their past. It compounds it if that person was rejected by previous relationships because when their current spouse pulls away from their evil behaviors then their demons cause them to act like they are a victim instead of owning that they were the abuser and need to seek deliverance for their own demons.

So many marriages are done under false pretenses where one spouse is under the influence of the spirit of Jezebel who hides their true demons within them until after they get their spouse to marry them. Then they begin to trigger often times on their honeymoon and sometimes a few weeks later. Then the true victim spouse feels like they were duped and lied to. 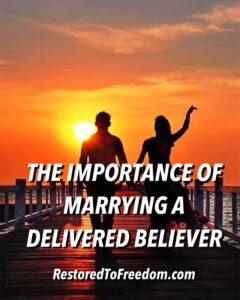 So just because a person says they are a Christian, or a believer and can pray in tongues doesn’t mean that they are delivered from their demons and won’t explode on you. Most Christians are not delivered from their demons or healed of their soul wounds from childhood. And those who refuse to get delivered will try to stop their spouse from their true calling in Christ and to torment them and make their lives misery. They will also emotionally hurt their own children and try to turn them against their victim spouse.

Can a person get healed and delivered later after marriage? Yes absolutely. But they have to be honest and own their negative behavior and actually want to be delivered. Most will simply blame their victim spouse and point the finger at them and lie to other people and act like they are the victim instead of humbling themselves and owning their negative behavior. It’s because their demons don’t want them to be freed. So be aware that you can date a person for a long time and think you know them only to discover once you get married that they will trigger into a different personality often times every other day or every couple of days and it could last for hours or days.

Soul wound healing and deliverance are needed in everyone’s life. No pastor should marry anyone who has not gone through the process of getting their soul wounds healed and deliverance.

One Reply to “THE IMPORTANCE OF MARRYING A DELIVERED BELIEVER”