NOT EVERY MARRIAGE WAS ORDAINED BY GOD

NOT EVERY MARRIAGE WAS ORDAINED BY GOD

Think about it.  Most marriages happen when a young man and woman are first physically attracted to one another.  Then they date for a period of time to see if they are compatible with one another.  If one person is very controlling, lies, cheats on them, emotionally abuses or worse, or has no godly fruit while the other person wants to live for God then often times they don’t follow through with the wedding.  Often times one of the parties says they are a Christian, acts nice to them as much as they are able to muster during the dating process but ultimately has no intention in their heart of living a godly lifestyle and simply wants their future spouse to provide for their financial or physical needs, give them sex when they want it,  yet will treat them like a slave with consistent emotional abuse, putting them down with a cutting tongue and possibly worse during the marriage.  Does that sound like a potential marriage ordained by God? Of course not.  Yet millions of marriages are consummated under false pretense.

So what happens if you had every intention of serving God in your heart and living a godly lifestyle and looking forward to loving your spouse but the person you married lied to you by saying they were a Christian but once they got you to marry them did everything they could to come against you, put you down for your Christian faith, come against you and your children with them, look at porn or ogle other women or men,  have ungodly sexual or emotional relationships outside of marriage yet tell everyone at church that they really want to stay in marriage to you and act like they are a victim so they can control you and hurt you and stop you from pursuing what God would want you to do? What are you to do? 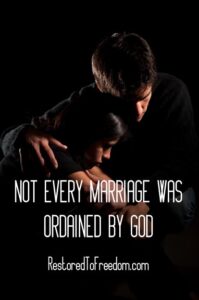 Was this a marriage ordained by God or set up by Satan?  There are millions of marriages that God never ordained whatsoever and was actually a setup by Satan to try to marry one of his people with one of God’s chosen.  It seems unfair that most marriages are not as they should be with a man submitting to God and a godly wife submitting to him and together serving the Lord in peace and love and doing God’s will in their lives.

So we are to give an ungodly spouse a chance to be honest with their bad behavior, to humble themselves from their pride, to get their soul wounds healed and forgive everyone who hurt them, to repent for their sin and change.  That is what God would want for them.  But they have a freewill to change or not. They can refuse to be honest.  They can continue to live an ungodly lifestyle and be friends with their demons and Satan producing fruit of the flesh. But you can also decide after they have rejected their chances to get their soul wounds healed and delivered to be able to change into a real Christian to separate from their truly “Unbelieving spouse” and choose to serve the Lord fully without any interference from an ungodly unbeliever. Often times the abusive spouse has been given hundreds or thousands of chances to change over many years and when they continue to decide to not want to change God will tell you when it is time to move on so you can serve Him and no longer allow your abusive spouse to be an idol before God.

God always wants both husband and wife to get their soul wounds healed and delivered and live in a peaceful marriage. But sadly the more controlling and abusive spouse will often operate under the spirit of Jezebel (can be on a man or woman) reject deliverance in themselves because their demons want to own them and want them to control and hurt their godly spouse.  So God will give them time to repent with the hopes they will choose Him but eventually after many, many hundreds and thousands of attempts to get them to change will tell you it’s time to go when He knows they will not change.  A spouse who continues to treat their spouse in an emotionally abusive, controlling way is not loving them like Christ would do and they are not truly a believer with the evidence of the fruit of the spirit (love, joy, peace, patience, kindness, goodness, gentleness, faithfulness and self-control).  So God will ultimately ask you like he did me and my wife “who are you going to serve – the demons in your spouse or me?”  People have a freewill to choose to live for Jesus or Satan.

When you are married to a person who truly has the same heart for Christ as you then you will love each other in such a beautiful and intimate way similar to how Christ would love the church.  It is a wonderful thing. Then together you can serve the Lord in peace and support each other as best friends would.  But if you have a spouse who refuses to repent for their sin and evil behavior then you will never have peace with the demons in them.

So we cannot put a spouse who chooses to live an ungodly lifestyle for Satan, trying to stop us from being able to serve the Lord, before Christ.  God gives all of us a chance to choose Him to serve and if our spouse chooses to emotionally abuse us to make our lives hell and cause us physical sickness and lie about us and live an adulterous life through lusting after porn or other people then we will be forced to make a decision of continuing to allow our abusive spouse to keep on hurting us or saying enough.  God hates divorce but also hates when a person abuses the other spouse which causes the divorce. God wants to get people to change and serve Him completely and would love to see marriages be saved and that is what we want in our ministry of Restored to Freedom as we have seen many.  But people have a free will to choose. A true believer in Christ does not want to control their spouse and make them do what their demons are telling them to do.  A true believer wants what is best for their spouse and to love them like Christ would love.  A true believer does not see what they can get away with in private and try to keep their evil behavior covered up behind closed doors. A real marriage ordained by God is one between two people who both want to live for Christ, who love each other like Christ and live in peace and encouragement.

So get your soul wounds healed and get delivered from your demons so you don’t have to endure going through a divorce.

4 Replies to “NOT EVERY MARRIAGE WAS ORDAINED BY GOD”