HOW DO YOU KNOW WHEN YOU HAVE TRULY FORGIVEN THOSE WHO HURT YOU?

HOW DO YOU KNOW WHEN YOU HAVE TRULY FORGIVEN THOSE WHO HURT YOU?

The enemy wants to hurt us through other people deeply by what they say and do to us. People with demons will try to control you and feel like they can tell you anything and expect you to do what they demand.

Betrayal from a person who is supposed to have loved you but then hurt you deeply with emotional abuse or worse and lied about you to others by blaming you is especially painful…especially from a parent or spouse.

Christians with demons have double standards by being able to hurt and abuse their victims but then lie and twist the truth and tell as many people who will listen to their lies that they were abused and were a victim. Then those who are true Christians who were the true victims of abuse usually cover for the abuser to everyone (except for those who ask and then they reluctantly explain the truth). People influenced by demons have a lot of pride and believe they can abuse their victims and live a sinful life and then expect their victims to remain silent to cover their abuse for them all the while acting like they are a victim. They also will accuse you of being the way they actually are.

So how is it possible to forgive someone who has abused you, then lied to others and acted like they were a victim and then slandering you be telling a false narrative to as many who will listen and recruiting others to hate you? 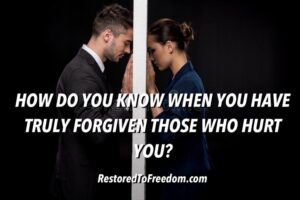 Ask Jesus to come and show you the people who have hurt you from His perspective and then you will see how they were deeply hurt when they were growing up and never forgave those who hurt them and now they struggle with hearing demons that told them to hate you. To take out all their pain upon you. Just like Jesus had to endure hatred by prideful people who wanted to kill Him and he stayed minutes before he died “Father forgive them…they know not what they do.”Then you can truly forgive those who have lied about you, betrayed you, abused you and command the demons to be gone from your soul that tried to get you to hate your abusers and those who lied about you.

You know you have truly forgiven a person who has hurt you when you stop talking about how much you have been hurt by them and can have compassion for those who hurt you. You don’t wish them evil because “Vengeance is mine sayeth the Lord.” You no longer have tears or bitterness when you think about what they did to you. When you can speak about what happened to you factually and unemotionally without any anger associated. When you don’t think about them multiple times a day but maybe once every couple months then you have moved forward and healed.

It’s very hard to stay at peace and heal when you are still being hurt by toxic people. Pray that the Lord will help those who hurt you to get healed of their wounds and delivered of their demons. But if they refuse you need to separate from them so you can be healed. You may have to take a step of faith to walk away or God may take them away from you. It is important not to stay forever with an abusive person because their demons will try to brainwash you to believing their demonic words and you will often develop physical sicknes or disease because of what they and their demons say to you over and over, day after day. I know of a 42 year old woman who was emotionally abused by her husband for 20 years actually die from a brain tumor because of the constant abusive words he spoke to her. He was sexually abused by his father and never could forgive him and get deliverance from his demons.

Jesus tried to avoid the prideful Pharisees and Scribes who had evil intentions but continued to have them approach him. He called them vipers and white washed tombs and spoke the truth about their evil.

Then as Jesus was dying on the cross He forgave them.

So we must forgive everyone from our hearts who has ever hurt us if we want our sins to be forgiven so that demons will not have legal rights to torment us.

“In the same way, you husbands must give honor to your wives. Treat your wife with understanding as you live together. She may be weaker than you are, but she is your equal partner in God’s gift of new life. Treat her as you should so your prayers will not be hindered.” ‭‭1 Peter‬ ‭3‬:‭7‬ ‭NLT