GODLY PEOPLE ARE RISING UP AGAINST JEZEBEL MORE THAN EVER!

GODLY PEOPLE ARE RISING UP AGAINST JEZEBEL MORE THAN EVER!

It is happening more now than ever. People are finally standing up to Jezebel in the church, in marriages, in the workforce, in family relationships – even in the secular world. The Lord is empowering people to stop tolerating sin, abuse, lies and they are rising up to calling out the abusers and Jezzebullies more and more every month!

““I know all the things you do. I have seen your love, your faith, your service, and your patient endurance. And I can see your constant improvement in all these things. “But I have this complaint against you. You are permitting that woman—that Jezebel who calls herself a prophet—to lead my servants astray. She teaches them to commit sexual sin and to eat food offered to idols. I gave her time to repent, but she does not want to turn away from her immorality. “Therefore, I will throw her on a bed of suffering, and those who commit adultery with her will suffer greatly unless they repent and turn away from her evil deeds. I will strike her children dead. Then all the churches will know that I am the one who searches out the thoughts and intentions of every person. And I will give to each of you whatever you deserve.” ‭‭Revelation‬ ‭2‬:‭19‬-‭23‬ ‭NLT‬‬

More people than ever are “just saying no” to being abused by those with demonic spirits, especially Jezebel. They are calling out their lies and sin. They are saying “enough is enough” and realizing that they don’t have to take emotional abuse, control, manipulation, threats, and evil intentions and behavior anymore.

Spouses who have been abused for too long are rising up against their abusers and telling them “You can no longer abuse me!” and “You cannot stop me from doing what God has called me to do!” Some of their abusers are shocked and are backing down, admitting they were horrible to them and now wanting to change through getting their soul wounds healed and delivered from their demons.

Others who were used to regularly emotionally abusing, raging and instilling fear are realizing that their abused prey are no longer backing down in fear to them but are rising up against them to expose their evil behavior. The abusers are starting to see that their normal tirades are no longer getting them what they want. They cannot force their abused prey to obey them anymore. The tide is turning.

There are changes happening suddenly all around the world with the abused rising up against their abusers. Jezebel is being exposed for the sin and lies they have been in. They can’t stop and dictate their false narrative as the truth anymore as people are no longer believing them. People are feeling such joy and freedom because they know they are choosing to obey God and no longer submitting to the demons in their abusers. It’s time for all to stand up to anyone who has abused them and say no more. 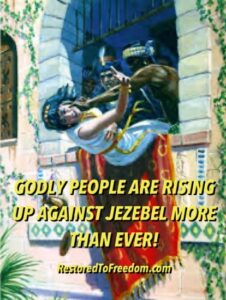 For the eyes of the Lord are on the righteous and his ears are attentive to their prayer, but the face of the Lord is against those who do evil

If the righteous will be rewarded in the earth, How much more the wicked and the sinner!

Adversity pursues sinners, But the righteous will be rewarded with prosperity