UNFORGIVENESS & PRIDE CAN BLOCK GOD FROM HEALING US

In 2015-17 I led a healing ministry in Noblesville, IN at a church and we were open every Saturday from 12-4 (sometimes 5 pm) and saw people from all over Indiana and eventually from other states come to get healed from various physical sicknesses and pains. We became the busiest healing room in the state. The Lord told me to always address having people forgive those who hurt them and repent for their pride because unforgiveness and pride would often not allow Him to heal them until they dealt with that first as the demons would have legal rights to attack them.

Unforgiveness is now classified in medical books as a disease. According to Dr. Steven Standiford, chief of surgery at the Cancer Treatment Centers of America, refusing to forgive makes people sick and keeps them that way.

With that in mind, forgiveness therapy is now being used to help treat diseases, such as cancer.

“It’s important to treat emotional wounds or disorders because they really can hinder someone’s reactions to the treatments, even someone’s willingness to pursue treatment,” Standiford explained.

Of all cancer patients, 61 percent have forgiveness issues, and of those, more than half are severe, according to research by Dr. Michael Barry, a pastor and the author of the book, The Forgiveness Project.

“Harboring these negative emotions, this anger and hatred, creates a state of chronic anxiety,” he said.

“Chronic anxiety very predictably produces excess adrenaline and cortisol, which deplete the production of natural killer cells, which is your body’s foot soldier in the fight against cancer,” he explained.

Barry said the first step in learning to forgive is to realize how much we have been forgiven by God.

“When a person forgives from the heart,  which is the gold standard we see in Matthew 18, we find that they are able to find a sense of peacefulness. Quite often our patients refer to that as a feeling of lightness,” he said.

Barry said most people don’t realize what a burden anger and hatred were until they let them go.

What does the Bible say about forgiveness? 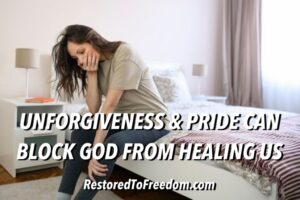 Pursue peace with all people, and holiness, without which no one will see the Lord: looking carefully lest anyone fall short of the grace of God; lest any root of bitterness springing up cause trouble, and by this many become defiled;” ‭‭Hebrews‬ ‭12:14-15‬ ‭NKJV‬‬

Let all bitterness and wrath and anger and clamor and slander be put away from you, along with all malice. Be kind to one another, tenderhearted, forgiving one another, as God in Christ forgave you. Ephesians 4:31-32

The second biggest blocker to people getting healed is their pride. Remember Naaman in the Bible who wanted healed from leprosy but had to humble himself first by dipping seven times in the dirty Jordan river before he would see his healing according to Elisha.

“The king of Aram had great admiration for Naaman, the commander of his army, because through him the Lord had given Aram great victories. But though Naaman was a mighty warrior, he suffered from leprosy. At this time Aramean raiders had invaded the land of Israel, and among their captives was a young girl who had been given to Naaman’s wife as a maid. One day the girl said to her mistress, “I wish my master would go to see the prophet in Samaria. He would heal him of his leprosy.” So Naaman told the king what the young girl from Israel had said. “Go and visit the prophet,” the king of Aram told him. “I will send a letter of introduction for you to take to the king of Israel.” So Naaman started out, carrying as gifts 750 pounds of silver, 150 pounds of gold, and ten sets of clothing. The letter to the king of Israel said: “With this letter I present my servant Naaman. I want you to heal him of his leprosy.” When the king of Israel read the letter, he tore his clothes in dismay and said, “Am I God, that I can give life and take it away? Why is this man asking me to heal someone with leprosy? I can see that he’s just trying to pick a fight with me.” But when Elisha, the man of God, heard that the king of Israel had torn his clothes in dismay, he sent this message to him: “Why are you so upset? Send Naaman to me, and he will learn that there is a true prophet here in Israel.” So Naaman went with his horses and chariots and waited at the door of Elisha’s house. But Elisha sent a messenger out to him with this message: “Go and wash yourself seven times in the Jordan River. Then your skin will be restored, and you will be healed of your leprosy.” But Naaman became angry and stalked away. “I thought he would certainly come out to meet me!” he said. “I expected him to wave his hand over the leprosy and call on the name of the Lord his God and heal me! Aren’t the rivers of Damascus, the Abana and the Pharpar, better than any of the rivers of Israel? Why shouldn’t I wash in them and be healed?” So Naaman turned and went away in a rage. But his officers tried to reason with him and said, “Sir, if the prophet had told you to do something very difficult, wouldn’t you have done it? So you should certainly obey him when he says simply, ‘Go and wash and be cured!’” So Naaman went down to the Jordan River and dipped himself seven times, as the man of God had instructed him. And his skin became as healthy as the skin of a young child, and he was healed! Then Naaman and his entire party went back to find the man of God. They stood before him, and Naaman said, “Now I know that there is no God in all the world except in Israel. So please accept a gift from your servant.” But Elisha replied, “As surely as the Lord lives, whom I serve, I will not accept any gifts.” And though Naaman urged him to take the gift, Elisha refused. Then Naaman said, “All right, but please allow me to load two of my mules with earth from this place, and I will take it back home with me. From now on I will never again offer burnt offerings or sacrifices to any other god except the Lord.” ‭‭2 Kings‬ ‭5‬:‭1‬-‭17‬ ‭NLT‬‬

The spirit of Leviathan causes pride when we get hurt growing up and then will attach to our spine and cause headaches, insomnia and confusion in our minds. When you try and read the Bible you often fall asleep.

“On earth there is nothing like him, Which is made without fear. He beholds every high thing; He is king over all the children of pride.”” ‭‭Job‬ ‭41‬:‭33‬-‭34‬ ‭NKJV‬‬

“These six things the Lord hates, Yes, seven are an abomination to Him: A proud look, A lying tongue, Hands that shed innocent blood, A heart that devises wicked plans, Feet that are swift in running to evil, A false witness who speaks lies, And one who sows discord among brethren.” ‭‭Proverbs‬ ‭6‬:‭16‬-‭19‬ ‭NKJV‬‬

Therefore it is imperative if you have physical pains or sickness in your body and want healed to make sure you at a minimum take responsibility for your part and be sure to forgive everyone from your heart and repent for your pride and sin. Otherwise the enemy has legal rights to keep the sickness and disease on you. There are other things which can cause pains and sickness such as living a sinful lifestyle, witchcraft attacks and curses, physical trauma, etc. but we need to make sure to take unforgiveness and pride out of the equation first.

I can speak from experience as I have been healed from everything since 2009. I have not taken any medications or OTC drugs nor spent any money on healthcare insurance since then. I know of people who have walked in God’s divine healthcare system longer. God wants to heal us but we also need to do our part and make sure to forgive everyone and walk in humility and align our lives with the Bible making sin rare in our lives, speaking life over ourselves and not death or complaining and walking in the fruit of the spirit.