(891) Comment
Share
Tweet
How does one recognize a person that may be struggling with operating in the Jezebel spirit?
The answer will vary depending on the relationship you share with them.  If you are married to them they will want to dominate you in most every part of your life and demand their own way and be very selfish and depending on the pain that they received from the lack of a father, rejection or control from their father all the way to verbal, physical or sexual abuse.  The more pain that they suffered the more controlling and abusive they will be.  Of course they will try to portray themselves as being innocent to others that they come into contact with as much as they can possibly wear the mask of innocence.

They will also be very selfish when it comes to meeting their own sexual needs.  They will also lie and behave very deceitful and blame you for everything that they started which caused strife to break out.  You will feel like you are going crazy at times and want to record them on video to show them how they started the strife through horrible words.  The psychological community would label them with multiple personality disorder because they can act so loving and kind one second and then turn on a dime and become horrible the next hour or two or more.

So what if your relationship is that you go to church with them?  They will act all sweet and nice to gain your trust and friendship and then slowly want to control you be making decisions as to where to eat, where to minister and how, how much time they should commit to you, and they will speak lies about other people in the church to make you think that those people are bad when in reality they are the bad one.  They will often times buy you nice gifts or give you money in order to buy your allegiance to them so that you feel like you owe them and then they can control you.
How about if you are a pastor of a church or leader of a ministry.  They will kiss up to you to try to become good friends with you so that you will offer them ministry positions and then you will look important to others and ultimately make decisions within the church or ministry thus giving you power and authority to control others.  Their ultimate goal is to shut down effective ministry and cause confusion in the body.  That is what the Jezebel spirit does.
So how do you deal with a person that operates in the Jezebel spirit?  Very carefully. If you choose to ignore them and let them operate in the Jezebel spirit you will eventually have chaos in your life and your ministry will be shut down.  Revelation Ch 2:18-33 talks about how God gave time for Jezebel to repent but she would not so He put her on a sickbed and killed her children (which represent the people that she was teaching).  Both men and women suffer from Jezebel, women tend to be impacted more frequently due to emotional wounds suffered in childhood from rejecting or absent or abusive fathers.  Since women’s hearts are more sensitive than men’s they end up having the Jezebel spirit partner with them more often.

Also men suffer from the Ahab spirit more often (not taking their proper spiritual authority and allowing their wife to become the spiritual head) thus many men are controlled and beaten down verbally (and sometimes physically and controlled sexually) into submission instead of rising up and becoming a mighty man of valor of the Lord. 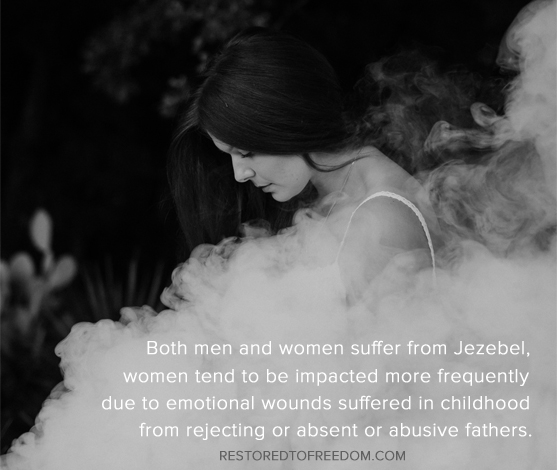 People around the world have been getting set free from the Jezebel and Leviathan spirits (Job 41) which cause pride, twisting of the truth and pain in their backs and insomnia with falling asleep while trying to read the Word or listen to it.  They have been getting delivered from the spirits by working with my ministry every day through ministry sessions that last typically an hour or so that I conduct over Facebook Messenger Video chat or through iPhone FaceTime or Skype.  They can also come see me personally in my Healing Rooms at New Life Assembly of God at 698 N. 10th Street in Noblesville, IN every Saturday between 11 am and 5 pm by appointment.
Nelson Schuman
Dir. of the Healing Rooms at New Life Assembly of God, Noblesville, IN
President of Restored to Freedom
nelsonschuman@gmail.com
Category: Jezebel Spirit Posted on Tuesday, February 21, 2017

2 Replies to “Recognizing People Struggling with the Jezebel Spirit”