Waking The Lion Within book – Ch 1 – Who’s Your Daddy?

When thinking about how our lives get shaped into developing who we become and how we behave from a spiritual perspective, one cannot fail to think about the major importance of having our earthly father model it for us.  Sadly, for most of us, we did not have a great example showing us how to master this extremely important responsibility during our growing up years from the time we were young to maturing into adulthood.  This explains why we see so many of us struggling to know what exactly to do in order to walk powerfully in who we are to be in Christ and thus an entire world is largely spiritually void.

Most of the generations had fathers who were busy working in their jobs and careers trying to advance themselves and make more money for their families in order to provide material things and an easier life for themselves so that they could retire from work and not have to worry about financial concerns later in life. Unfortunately the enemy did a great job of getting our men’s minds off of spiritual life-giving desires and onto material concerns – allowing an entire generation to be void of most all things godly.  Other fathers struggled to just make enough money to provide food for their families much less thinking of how to walk in their authority of Christ due to their challenges with the lack of a proper role model in their life.  Therefore their walk with the Lord suffered due to the lack of time that they had available to draw near to Him, and their reliance on themselves became greater than trusting the Lord to provide for their needs.

Unfortunately, by taking our eyes off of the Lord and putting them on our current circumstances we lost all faith that the Lord would provide supernaturally for all our needs; so the enemy was able to use our fear for financial provision and our tendency to look in envy at our neighbor’s cars and homes to pull us away from our real provider, Jehovah Jireh.

Many fathers back in the 1950’s and 60’s in the United States would often take their families to church and tried to lead what would be an acceptable “godly” appearing lifestyle, but few were really tuned in and received direction from the Lord on a regular basis.  Therefore, when their children observed them every day in how to deal with life decisions they never saw a man who was able to hear from God nor trusted completely in the Lord.  They knew that they were supposed to behave acceptably, which usually meant not to have sex before marriage and once married to stay married and not divorce.  If there were disagreements in marriage you were to work things out and not even mention the D word.  Unfortunately the men would either go to church and not listen to the message because most if it was boring to them and could not see how to apply it or they would just stop going to church and stay home to watch golf, football, baseball, basketball or do something else that their flesh was desiring.

When it came to understanding at a deep level why people did the things they did, very few to none talked about the prevalence of how demonic spirits affected them.  The expansion of psychologists and psychiatrists became more prevalent as people tried to understand why people behaved in ways that were not normal.  Trying to have discussions and counsel people to behave more “normally” developed into a profession of counseling and then well-meaning Christian people tried to help people, but they did not understand the invisible world of spirits and how they controlled humans by speaking to them and getting them to behave in ways that caused people pain.  Thus more and more doctors and psychologists and the whole mental health world dealt with people the only way they knew how and that was through medication which never got to the root of their issues and caused many more side effects including suicide.  So today we are at an all-time high with medicating people to try to deal with spiritual issues.  Then those who are forced to take stronger medication have to deal with all the side effects due to spirits of Pharmakeya affecting people.  What a mess this world has become.

Unfortunately due to fathers from the past not knowing their authority in Christ we now are experiencing an epidemic of people who are behaving in ways that are out of control, desperate, depressed, over medicated and are running around in fear instead of walking in the boldness and authority of Christ. Fathers abdicated their responsibility in learning what it was to lead their families spiritually and gave it to either their wives to take over or to no one.  Thus the state of the average family in the world today is a large percentage of homes have no fathers or have fathers who do not know how to listen to the Lord and lead from a godly perspective.  Also, the United States’ women’s movement of the late 1960’s and 70’s that developed into feminism began to usurp what God designed in that men no longer would lead so women decided they must take over many aspects in society and that they no longer needed a husband

The enemy pounced on this and the emasculation of men ensued causing them to feel like if they attempted to stand up for what was right that they were coming against women instead of the real enemy of the devil.

Thus when men no longer pressed into the things from the Lord, the enemy increased the strategy of using women to be the new spiritual leaders which proliferated a spirit of control and manipulation over men that was not what the Lord designed from the start of the world. This resulted in men who would now be forced to submit to their wives and take their seats in servitude.  Therefore what we are dealing with today are men who have lost their spiritual boldness and godliness in being able to lead their wives and families in the things of the Lord.  Their backbone has been weakened and their voice is silent or barely whispering.  They have been feminized into submission by the enemy into a position of spiritual weakness. They know in their hearts that this is not right, but they do not know how to “right the ship” – so to say – and change direction in their lives to get back on track.   They cannot hear from the Lord, are unsure how vocal they should be in their beliefs so as not to upset their spouse or boss at work, feel hopeless that they could ever be looked at as a bold man of God like Moses or Elijah, and do not know many other men who they can talk to in order to be properly mentored. 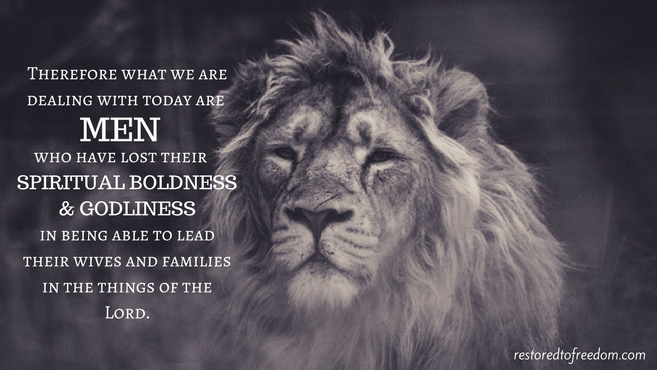 I have met so many men who are walking around aimlessly in their spiritual lives because they rarely open up in candid conversations with other men and those who are in leadership are often times very soft spoken and gentle by nature (which is not a horrible trait to have, by the way) but are not confident in who they are in Christ and have never been taught on how to walk in the authority of Christ and what that means.  Their wives “wear the pants in the family” and they don’t know how to take the proper godly authority that the Lord has called them to have.  Women do not really want to be the spiritual leaders of the home to their children, but if men are not going to take their rightful positions then they feel someone has to do it (can I get an “Amen” from the women who I know are reading this book!).

Therefore the reason why a man is unable to walk in his Christ designed authority he was supposed to have from a spiritual perspective is due to his father not knowing how to do it.  And his father never did before him and so forth and so on from generation to generation prior.  So when you have so many generations of men that do not know how to lead spiritually, how do you break free and start leading?  Why is it is so hard for a man to step up and become who Christ called them to be?  And this is not only a male issue as many women are passive when it comes to walking in Christ boldly as they should.  So how can any person change to being more confident in whom they are in Christ when they have never seen it modeled for them?

That is what this book’s goal is – to help people change from a life of spiritual passivity and weakness into a new life of walking every day with the ability to hear the Lord speak direction to you while also having no fear in every decision that you make and to not be held back by a lack of confidence of who you really are in Christ.  The Lord does not want His people to have the enemy dictate to you what he wants you to be.  The Lord has designed us to roar like a mighty lion, which is not afraid of anything while also being humble, pure and loving at all times.

Most people think of the word meekness as being submissive or weak but it actually means strength under control.  That is what Jesus stood for, walked out and modeled for us every day.  When it came time for Him to give up His life He showed the power that He possessed as the 300+ soldiers came to arrest him. John 18:3-6 NKJV states, “

3 Then Judas, having received a detachment of troops, and officers from the chief priests and Pharisees, came there with lanterns, torches, and weapons. 4 Jesus therefore, knowing all things that would come upon Him, went forward and said to them, ‘Whom are you seeking?’ 5 They answered Him, ‘Jesus of Nazareth.’ Jesus said to them, ‘I am He,’ And Judas, who betrayed Him, also stood with them. 6 Now when He said to them, ‘I am He,’ they drew back and fell to the ground.”

Thus Jesus’ words “I am He” caused over 300 soldiers to fall to the ground.  He had all this power yet allowed Himself to be arrested without stopping it.  He willingly gave up His life while having over twelve legions of angels at his disposal (over 72,000 angels and just one angel of the Lord killed 185,000 Syrians in one night in 2 Kings 19:35).  This is what the word ‘meekness’ means – strength under control.  We must always be in control of our emotions and not lash out in anger no matter where we are (if someone cuts you off in traffic or slows you down – do you speak disparaging words out or do you stay calm and slow down without saying a word?).

Yes, Jesus did show more aggressive emotion in righteous indignation when he cleared out the buyers and sellers in his Father’s temple that had been turned into a marketplace but He did not strike anyone and there is no time in His life that He ever hurt anyone physically.  Jesus was able to convey His wisdom in what needed to be shared while controlling His behavior and walking in love and peace.  He could speak the truth in love.  Sometimes people do not want to be told the truth, but it is all in how we speak it that matters.