The Jezebel Spirit Often Causes A Person to Have Physical Infirmities

There will often times be some physical afflictions on the controlling person that is being tormented by the Jezebel spirit that prayer may temporarily bring minor relief from but never seems to be able to get the person completely set free….because the tormenting spirit will not allow them to be healed since they have a right to co-exist in the body.  Also if you are a woman whose husband has the controlling spirit, then you will usually also suffer from physical infirmities and some could be debilitating and deadly as the verbal assaults take a toll on your body, mind and spirit. I know of several that have died from cancer in their 40’s after suffering years of verbal abuse from their Jezebel husband.  Therefore the person will become frustrated by not being totally delivered from the pain in their body. 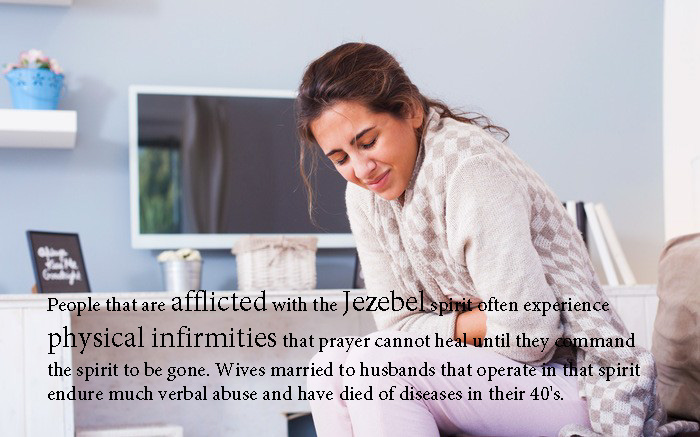 Some of the common physical pains in one’s body include:

The older the person, the stronger the likelihood that the person will have a significant physical ailment and/or disease due to the tormenting spirit having had control of the person for so long and ultimately wanting to kill them before they get set free from the enemy and operate freely in doing the Lord’s work and minister unencumbered.

There are also common traits that a person’s family members might have experienced both immediate and in their ancestral and children’s lives.  That is because the spirit that is afflicting them will have started way before the person was ever born and will come down the blood line generation after generation until it is finally recognized and broken off.  Just think about how many sins your ancestors on both sides of your parents have given enemy spirits access to everyone on down the line.  Exodus 34:6-7 “6 And the Lord passed before him and proclaimed, “The Lord, the Lord God, merciful and gracious, longsuffering, and abounding in goodness and truth, 7 keeping mercy for thousands, forgiving iniquity and transgression and sin, by no means clearing the guilty, visiting the iniquity of the fathers upon the children and the children’s children to the third and the fourth generation.” Also Deuteronomy 5:8-10 “8 ‘You shall not make for yourself a carved image—any likeness of anything that is in heaven above, or that is in the earth beneath, or that is in the water under the earth; 9 you shall not bow down to them nor serve them. For I, the Lord your God, am a jealous God, visiting the iniquity of the fathers upon the children to the third and fourth generations of those who hate Me, 10 but showing mercy to thousands, to those who love Me and keep My commandments.”

That is why a doctor will ask you what diseases your parents and grandparents have had because you will most likely have the same afflictions that they did due to the spirits having a right to come down the bloodline from generation to generation.  Until those sins and curses are broken and revoked you will be living under them your entire life and be controlled by them and never be able to truly enjoy the life that God wanted and planned for you.  So think back through your ancestors right now and write down some of the common areas of infirmities that your family members have endured.  This will be a way that you will learn if there are generational spirits that have come down through your blood lines that are affecting you and possibly your own descendants.

Some of these afflictions include the following: