What people want more than anything is to live in peace

So many people that I have met during my lifetime who work their entire lives in order to make as much money as they can so they can buy things that take them farther away from true peace in the Lord.  I should know because I used to be one of them.  I grew up on a farm west of Fort Wayne, IN that was located just west of a small town called Columbia City.  I often had to wear “hand-me-downs” of clothing from my two older brothers, or patched up jeans, because we simply did not have any extra money.  We lived in an old 100+ year old farm house that sat atop a hill overlooking highway US 30 which stretched from SE of Chicago across the state towards Ohio.

I got a job as soon as I could drive when I was in high school.  I was in 4H and had the grand champion barrow (male pig) and sold it for about $1,500 to the local Kroger grocery store in Columbia City.  I went into the manager of that store to thank him for purchasing my pig and then asked him for a job. He hired me on the spot because he knew that I was not only a hard worker, but an honest boy with the highest integrity.  I learned a lot when working my way through high school and later one year in college at IPFW before moving away to live in West Lafayette, IN while attending Purdue University. 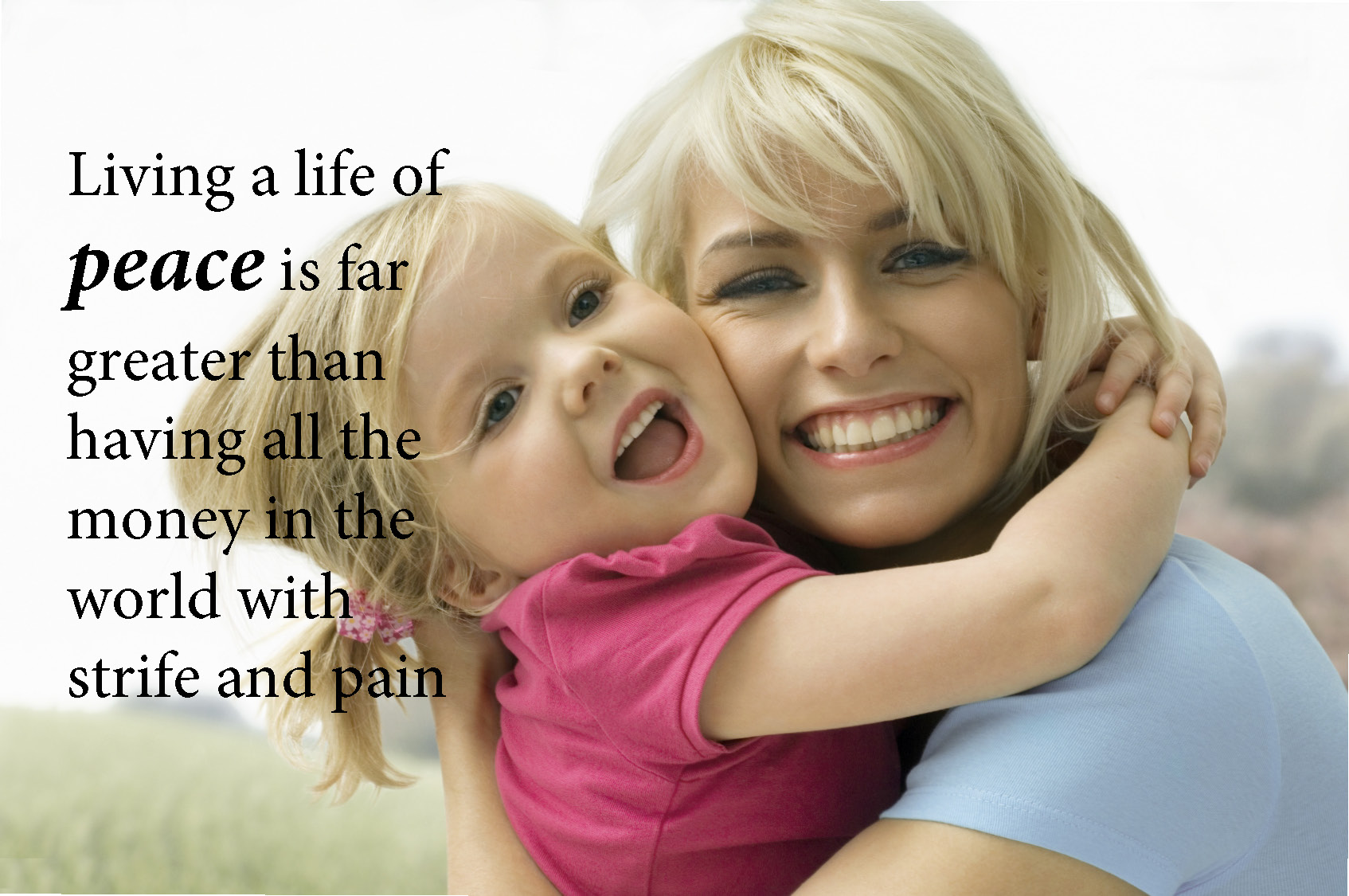 When I graduated from Purdue  I got a job selling loan software to banks around Indiana, Illinois and Kentucky and quickly started to make more money than i could have ever imagined. I was able to buy very nice things (new cars, new houses, new clothes, eat out wherever we wanted, beautiful vacations) yet when my son was affected negatively in a life altering way, I no longer had peace in my life.  Then my wife and I began having a lot of strife in our marriage.  For 10 years I lived in a state of constant strife with no peace whatsoever.  I became sad and disheartened as I could not fix what was broken.  I would never divorce because I felt in my spirit that was not the plan of the Lord.  But my wife did and I tried to stop it but couldn’t.  My children became the fallout for that decision.

I then began my journey learning how many throughout the world lived.  It really rocked my world.  My children began to turn away from church and drawing farther from the Lord’s ways.  I was losing all that I had worked so hard for.  At that time I had amassed about $500k of assets between my retirement, house, cars, savings, but what good was all that money if I had no peace in my life.  Then in the fall of 2008 the Lord started to speak to me for the first time. He asked me what I wanted out of my life  Money or peace.  I told him that I thought if I had a lot of money that I would obtain the peace I was looking for.  I grew up with such a lack of money and saw all the stress it caused between my mother and father.  But since I had worked so hard to make a lot of money yet had absolutely no peace, I told the Lord I definitely wanted peace over all the money in the world.  He told me that He would take away all my money, change me for Him in a dramatic way, and then rebuild the money far greater than it was before, yet I would give Him all the glory and credit as I would serve Him in a far greater capacity then I ever could imagine.  And I would use much of the increase in new money for Kingdom purposes to affect the lives of many around the world.

He wanted me to look for my next wife.  I found her shortly.  He told me that I would love her like Christ loved the church.  I did not know what that meant.  I received multiple prophetic words that I would be doing ministry with people around the world.  Operating in a ministry that would be flowing in deliverance, prophecy and miracle healings.  Everything that was prophesied over me eventually came to pass, but only after I endured some extremely hard, personal sacrifice and getting hit by the enemy in the most extreme ways imaginable through my wife for 6 years in which I could not tell anyone in the world about as the Lord told me I had to remain silent until He released me.  He said that the lives of hundreds of thousands would be affected eventually if I would do what He wanted me to do for Him. I agreed.

Now fast forward 8 years later to May 2017.  I now minister every day to people around the world who have suffered pains from childhood that involved fathers and mothers that treated them with a lack of unconditional love.  They were rejected, controlled, and in some cases abused emotionally, physically and sexually.  i minister to individuals who are now suffering in marriages, been divorced, and trying to grow in the Lord or their callings yet know that there is something not quite right.  And I have a sales and marketing degree from Purdue University.  Does the Lord use people in ways that no one else could imagine?  Yup!

I now flow in deliverance, prophecy and miracle healings.   How crazy is that? I went from selling software to banks to truly making life changing differences in people. The biggest thing that I have noticed with people is that they want to be loved unconditionally and have peace in their lives.  What the Lord wants for them is to get their hearts healed from their past wounds through forgiving the people who have hurt them, commanding any enemy spirits (Jezebel / Leviathan / Ahab) to be gone from them, and then walking in peace from all enemy words they hear and negative circumstances.

Walking in peace every day is far more valuable than amassing a huge fortune while being stressed out constantly.  And there are so many who are living with spouses who say so many hurtful words to them, causing more division and pain in their hearts who have already been hurt from their pasts.  It is a wonder that anyone can live another day in life.  I feel like the enemy has so stacked the odds against Christians that it feels like 2/3 of the angels left God instead of just 1/3 to join Lucifer when he became prideful and left heaven.

What I have learned is that whenever a person is not at peace, it is always the enemy that is behind it.  Unfortunately people cannot discern in their minds when the thoughts they are thinking about are actually coming from the enemy whispering to them instead of their own thoughts.  They then think about what the enemy told them and believe his lies which cause them to behave out of fear, anger, resentment, offense, and then never live a life full of peace.

Last year I wrote a book called Keep Your Peace On : Limiting Strife in Your Life, which those who have read it have commented it really helping them to live a life full of peace.  I talk about how to discern more quickly when a thought from the enemy comes in to try to cause you fear or anger or to take  an offense, and to shut his voice down and change your mindset to focus on things that are true, noble, just, loving, kind and of good report.  When you think about the good things of the Lord, you will not be taken down a rabbit hole of focusing on things that the enemy wants to harass you with and can therefore stay in peace all the time.  Also if you pray in tongues you cannot hear the enemy speak to you.  I pray in tongues at least an hour a day. It helps to build up my spirit man and I am able to not allow my flesh to drive my decisions in life.

So yes, peace is far greater in value than all the money in the world.  And I walk in it every day, 24 hours a day.  I get to love on a hurting world of people to help them to learn the tactics of the enemy, and how to change their past pains, into being able to help others to be healed and eventually launched into their own callings of the Lord.  I love people so much and want all to be at peace.  It is truly a privilege to make a positive  life-changing difference in someone’s life.  And with Mother’s Day approaching this Sunday, so many grew up with moms that were hurt by their own fathers and mothers and never knew how to love unconditionally. I pray for you that you are able to forgive your mother for any and all pain that she caused you.  Hurting people hurt people until they work through getting healed from their past wounds.  God wants all of His children to be healed from how the enemy hurt them.  Look at how the Lord sees them and you will be able to give them more grace and live a life full of peace.

It is time for the world to wake up to just how the enemy has hurt them, instead of focusing on the person.   Then forgiving them and moving on in life.  I will never strive with anyone, ever. It is not possible.  No matter what anyone says about me or tries to do to hurt me.  I choose to forgive and love.  It doesn’t mean to allow a person to abuse you constantly forever. It does mean to never take an offense and harbor feelings of anger and hatred towards them.  It means to look at them like Christ sees them.  To give them grace and give them to God.  If i can do it, so can you.  God is counting on you.  I love you and am praying for you.  I declare that you will walk in peace 24 hours a day and that nothing the enemy can do will steal your peace from you. Keep your peace on!