Is it possible to live a life free of strife?  What did Jesus do?  Did Jesus worry about anything?  Did he complain about anything?  Jesus was our model for living life.  He had no cares in this world.  He did not worry about where he was going to lay his head each night.  He did not get into arguments with people. He did not fear if he was going to have enough money to purchase what his needs were.  But you say “Well, he was Jesus – that’s different than people can live like today.”   He had enemies (Pharisees) and people who were jealous of him.  But He kept his cool as He knew who He was.

So is it possible to live a life without striving, worrying, fearing, being angry, taking an offense, and just being at peace every day? The answer to that question is, absolutely yes.  But is it easy at times, absolutely no.  What must one do to live a life full of peace, love and joy every day?  How do you interact with people who hate you, are jealous of you, say things that are horrible to you, mock you, betray you, etc?  You simply love them like Jesus. 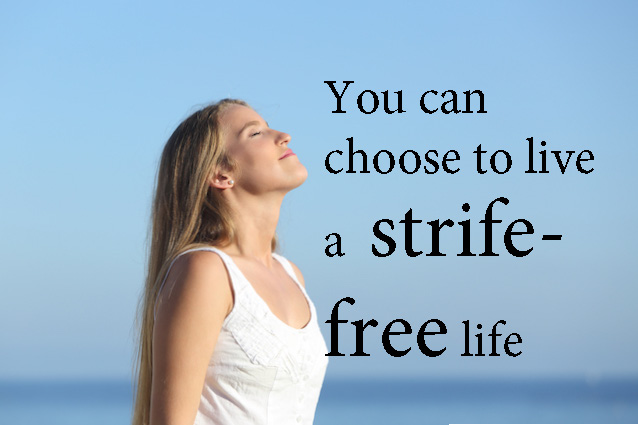 It has been a process in my own life to go from living a strife filled life to a strife free life.  I had to endure some people in my life who had no peace whatsoever in them, which caused me to not have peace.  Yes it was extremely wearing on me and at times I just wanted to run away….but I stayed with them as the Lord instructed me and became stronger for it in the end.  It was a season in my life that on many occasions seemed like I could no longer take another hour of the extreme tribulation, but I persevered through it because in Christ all things are possible.

And now I have finally come out the other side and am living in peace 24 hours a day. I have no worries about anything, no fears, no concerns, even when my circumstances appeared not good.  What I have learned is that it does not matter what your circumstances currently are if you can get your mind focused on the truth of the situation as God sees it.  You may owe $75,000 or more, and it would appear that there is no way that you can pay off your debt, but if you focus on things that are true, noble, just, lovely and of good report, then you change what the enemy is trying to do to steal your peace. You no longer worry and fear and get driven by the enemy.  You take back control and speak only life from your mouth.  Then you are literally prophesying your future and your entire disposition changes to looking forward to your future and then change your current circumstances eventually (could take weeks, months or years) and it is all worth it in the end.

So many Christians (and unbelievers) hear the enemy’s voice whisper to them causing them to hear his lies of fear, uncertainty and doubt.  Once a person hears the enemy’s lies, he has got them on his territory.  Jesus never feared about anything. And if Christ lives in us then we should not fear anything as well.  Speak life, be positive and watch your negative circumstances shift.  I have seen it in my life.  Since January of 2015 I moved out of a circumstance because the Lord told me to.  He told me that He was going to bless me with a ministry that would grow rapidly and I would soon be ministering to people around the world.  At the time, nothing appeared to look like that would be possible. I barely made enough money every day to survive (I even had to give my blood – plasma – to pay for food and gas).  But I kept my mind staid on the promises of the Lord.  And within ten months I started my own Healing Rooms that soon become the busiest in all of Indiana (and perhaps the Midwest) as people came from many states to have me pray for them.  The Lord told me that would happen but nothing looked like it could.  I had faith to believe that what the Lord told me would come to pass but had many people who tried to come against me, mock me, or lie about me.  But God.

Then in January of 2016 the Lord told me to write a book and thousands around the world would read it and get delivered from the toughest spirits on earth (Jezebel and Leviathan).  I had never written a book before and had no idea how to start.  But within a few weeks the book was written and made available on Amazon and came out in March of 2016 and thousands around the world have now read it and have had their lives changed, marriages saved, and ministries purified and launched.  It is so crucial to listen to the Lord and Holy Spirit for your direction and not to listen to other people who don’t as the enemy will speak through them.

Now it is June and the Lord is blowing open the doors for me. I am in New York City / NJ and am seeing the start of something way bigger than me.  The Lord is connecting me to people around the world because of the need to purify His church from the Jezebel / Leviathan and Ahab spirits that are so prevalent.  You can tell when the Holy Spirit and Lord are behind a movement because you don’t have to make it happen, it happens divinely and supernaturally. You just need to make sure that you are pure and righteous before the Lord and are not operating in any hidden, secret sin.  Then there is nothing anyone can do to stop it.  God is all over it and it is beautiful to watch.

So keep your peace on and do not worry about a thing. God’s got it.  Speak life not death.  Enjoy your life. Do not focus on negative circumstances but declare what the Lord has told you and it will eventually come to pass.  Love you !!!