How to be emotionally healed from trauma from your past

When a person is hurt emotionally through others taking advantage of them in various ways, the enemy will speak to them to take offenses of the injustice which then harbors the power of unforgiveness used by the enemy to cause continued bitterness and ultimately physical and emotional bondage.  Therefore there are so many people today who are walking around with wounds from their past who are stuck and cannot move forward into all the freedom the Lord has for them based upon the level of abuse and trauma suffered through other people.

Some people are hurt through their father and / or mother who treated them badly, rejecting them, controlling them, abusing them in every way imaginable.  Some people are hurt through their spouses treating them with control, manipulation, sexual selfishness, lying, cheating, etc and then not apologizing to them for the abuse.  So with all the hurt and pain that a person receives, how can they move past their past onto their future that the Lord wants to take them into?  Because the Lord wants to use their pain for His gain in helping other people to be set free.  The Lord wants to anoint their lives in powerful ways to help others but they can only do so when they forgive those who have hurt them.  Thus the challenge is to get people to forgive there abusers and see those who have abused them through the eyes of Christ. 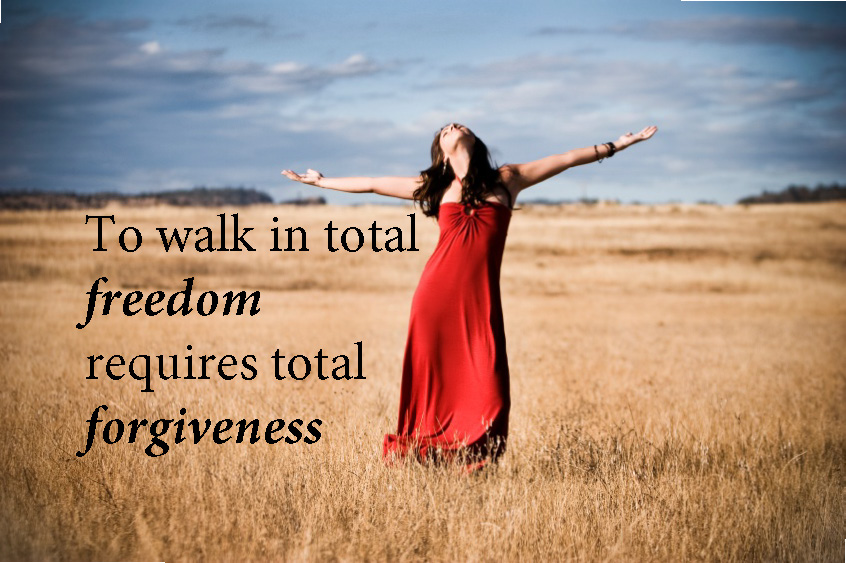 It is important to take a look at the history of people over time who have treated others in abusive ways.  Simply put, hurting people hurt people.  And the enemy is behind it all.  When a person is emotionally, physically or sexually abused as a child / teenager growing up then the enemy will start whispering to them in their minds causing them to believe much truth but some lies. The enemy will say things like “your father does not love you because he speaks harshly to you and will not protect you….therefore you need to protect yourself and never trust anyone (which includes God).”  Then as the child becomes older they will not trust anyone else and become what the world would label as “control freaks.”  They ultimately do not trust God and go into modes of having to get their way on everything and thus driving away those they marry or have relationships with.

So if you have been abused by your spouse (who was hurt by a father or mother), what do you do to move forward?  You need to look at them like Christ sees them.  As a hurting little boy or girl who was not loved unconditionally as they grew up.  Then you can have compassion for them instead of  hatred.  You can forgive them for they know not what they do.  You have to separate the person from the demonic spirits controlling them.  Once you can see them the way that Christ sees them, then you can have more grace for them and choose to forgive them for the bad things that they did to hurt you.

When you have forgiven them for all the things they did to hurt you, then you can move forward and be healed completely by the  Lord.  Then you can actually help other people that the Lord will bring to you to love on and help them see those who have hurt them through the eyes of Christ.  If we don’t choose to forgive those who have hurt us then the Lord cannot forgive us. Matthew 6:14-15 NKJV “14 For if you forgive men their trespasses, your heavenly Father will also forgive you. 15 But if you do not forgive men their trespasses, neither will your Father forgive your trespasses.”

I had a situation where the Lord had me marry a woman who was hurt her entire life through parents who could not love unconditionally due to them growing up with the lack of a loving parent.  I could see her as Christ could see her, as a hurting little girl who was behaving out of the pain that was in her life.  Through all the men who rejected her in marriage, I could see that she had major emotional trauma that she was dealing with which manifested in behavior that was extremely controlling and manipulative based out of a spirit of fear that developed into an extreme spirit of Jezebel and Leviathan.  I loved her like Christ the entire 6 years that I was being tormented by her in marriage until finally the Lord told me to separate from her and then He would set up a worldwide ministry through me as I would help hundreds of thousands to be delivered from the Jezebel and Leviathan spirits and heal marriages and purify those in the church who were operating out of those spirits.

I was able to forgive her for the atrocities I suffered because I could see her through the eyes of Christ.  I could discern she was in such great pain that she could not help herself to be honest and see the truth.  I did not want to divorce her but wanted her set freed.  Instead she lied about me to her family and those in her church and people believed her lies.  Then she divorced me after all the abuse I took from her.  I could have gotten extremely bitter due to all I did to lay my life down for her in every way.  But I chose to forgive and move forward. The Lord did as He told me would and led me to set up a ministry called Restored to Freedom which is helping people to be set free from the spirits of Jezebel and Leviathan and exposing the truth of what is happening in the church around the world.  It is the number one reason for divorce and strife in the world in marriages, and church splits.

So even though I could have gotten very bitter and angry about what I had to take from my spouse, I chose to forgive and be used by the Lord in a powerful ministry helping others to be freed.  You too can choose to forgive others for how they took advantage of you, hurt you, abused you, and then be used by the Lord to help others that He wants to bring to you.  And in the process you will be able to block the enemy from having a right to cause you to receive physical sickness or diseases through allowing a root of bitterness and unforgiveness to grow.  Loving like Christ is possible but only if you choose to forgive and move forward.