Every month I hear from people around the world who have endured much verbal abuse from their spouses and wonder “when is it time to separate?” I personally know what it is like to endure some extreme tribulations as the Lord had me stay in a relationship for 6 years which caused me to endure constant verbal and emotional abuse, some physical abuse and some sexual control and manipulation and told me that I could not tell anyone until He released me. He told me that I had to go through it and that it was ultimately for other people around the world and would all be worth it in the end.

It was finally on January 23, 2015 that the Lord told me to separate because the spirit within my wife hated me and ultimately wanted to kill me.  He said that once I separated that the Lord would begin to set up a worldwide ministry as  people would hear about me and come to get freedom.  I did not want to separate as I just wanted my wife to be set free from the spirits that she told me had spoken  “bad things about me” to her.  But once I separated I felt an immediate peace from the constant verbal and emotional control, manipulation and degradation that I had to receive for most hours of the day and night we were together.  I was on “safe” ground from the enemy within her that could no longer force me to do things that were not what God wanted me to do. I could actually do ministry unencumbered from the enemy trying to stop me each day. 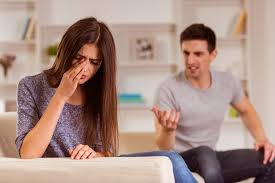 So many people are in relationships where they have been controlled and manipulated by their spouses who were hurt by their own father or mother. Then they hear the enemy’s voice when they grow up and it drives them for a lifetime. They hear his voice so loudly that it tells them to control and manipulate their spouse, their fellow colleagues at work, those in church and other ministries. It causes them to be very prideful and arrogant and think more highly of themselves.  Some believe that they are the most beautiful women or handsome man in the world and others should serve them.  At the end of the spectrum the psychological community would call them Narcissists. What they are really operating in is that they hear the voice of the enemy extremely loudly. The enemy is the spirits of Jezebel and Leviathan.

Often times when women are married to men who have the spirits of Jezebel / Leviathan they are verbally and emotionally abused so strongly that over time their bodies can no longer function and they start to develop various sicknesses and diseases that can kill them.  I have seen women who have developed cancer and other diseases, then wanted to die because they stayed in the emotionally abusive relationship too long and then did die.  Most men are able to handle the constant abuse physically but most become very depressed as they hear the enemy through their spouse emasculating them spiritually and in their God-given authority to lead their families.

So at what point is it time to separate?  For each person the situation will be unique but for many that contact me after many years of severe abuse – the time is often now.  They simply need an advocate that understands from a spiritual standpoint what is going on.  Too many professional counselors, psychologists, and pastors are missing it. They get into counseling sessions with a couple and unfortunately they do not know who to believe is telling the truth.  Those who have the spirits of Jezebel / Leviathan are master liars. Academy award winning liars that will lie to your face without blinking an eye.  The hapless victim spouse who is in counseling sessions will feel completely frustrated because their Jezebel spouse will bring up things that their controlled spouse did but not explain that they provoked them under extreme duress to behave in ways that they normally would not.  In other words, Jezebel will push, push, push their spouse past the point of being who they really are and many will explode in a verbal tirade and then have their Jezebel spouse point the finger at them saying “look how bad you are to me.” No one wants to separate but in order to help your Jezebel spouse to get free you often times must separate first to gain peace on safe ground and then you can deal with your spouse.  When you are in an airplane they always tell you in case of an emergency to put the oxygen mask on yourself first before attending to your child.  If you do not live and end up dying, then you both will die.

When the counseling community wakes up to truly understand that the main reason for marital strife is that one person suffers from a strong Jezebel / Leviathan spirit that is whispering loudly to them causing them to control and manipulate their Ahab spouse, then we will finally be able to see the masses get deliverance.  The main reason for divorce is that one person has Jezebel and one has Ahab. One is a taker and the other is a giver. One is a controller and the victim is controlled.

So once the victim spouse finally learns that their controlling spouse has Jezebel and Leviathan it is time to make them aware of it.  If their controlling spouse finally admits that they are operating out of that spirit and wants help, then they can get their freedom by going through a deliverance session which involves forgiving their father or mother (or both) for all that they did to hurt them (and anyone else).  Then they ask forgiveness of the Lord for all that they did to others and repent for operating in those spirits. Then they simply command the spirits to be gone and feel amazing peace and become a loving person.

If the person will not admit that they have a problem or could have those spirits, and want to continue to abuse, then it is time to separate.  The goal of the separation is to get the person to look in the mirror at themselves and to own up to the truth. The truth that they have behaved horribly to their spouse and / or children and need to change. The goal is to get them set free. Many have told their spouses that they need to be connected to my ministry Restored to Freedom as we are seeing a very high rate of success with getting people set freed from those spirits.  We do a once a month Worldwide Deliverance Session on Facebook LIVE at 9 pm Eastern the last Sunday of each month (the next one is October 29).  They can also watch a recorded deliverance video on either my website under the KBN TV section (Sept 10, 2017 is one) or on YouTube under the Nelson Schuman Restored to Freedom TV channel.  Or they can read my book Restored to Freedom available on Amazon (and soon to be available in an Audible book on Amazon, iTunes or Audible).

The goal of separation is to help the victim to have immediate peace and then get the person with the spirit of Jezebel / Leviathan to have a wake up call as to how serious it is for them to look in the mirror and take responsibility.  Enough is enough.  It is time for people to be honest and realize that the enemy is the true enemy in all relationships.

2 Replies to “When is enough…enough?”