Billions of people on earth just want to have a good relationship where they are loved and have their needs met but unfortunately many of them self-sabotage their own relationships and don’t even see it.  The enemy blinds them in seeing what they do that creates strife and friction between them and their loved ones and has them blame all the issues on their spouse or children or other friendships.  As long as you give them everything they want or obey their every command then they will get along with you – but as soon as you defy their demands then you will get an earful.

So what are some of the ways we ruin our own relationships?

Jealousy – unfortunately many people ruin their relationships because they have unhealed soul wounds from their past and do not know who they are in Christ and the enemy convinces them that if their spouse glances at another person from the opposite sex or has healthy interactions with someone from the opposite sex then they get triggered and will go off on their spouse verbally. They feel like they are going to lose their loved one because when they were growing up they had someone leave them (usually under the age of 18) which reminds them of that in their past.  The overwhelming feeling of emotions takes them over and causes them to raise their voice and have a tone and drives a wedge between their own marriage or relationship causing the person to be driven away.  Now I am not talking about valid things that the spouse is doing that they should not (ogling every woman or man, making comments about them to cause their spouse to be jealous, etc.) rather I am talking about normal everyday human interaction which causes the person to overreact and get triggered into an alternate personality which is affected by demonic voices in their head to convince them that they are justified to be jealous and not trusting an otherwise trusted person. 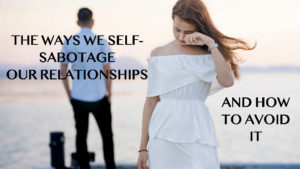 Pride – when a person thinks more highly of themselves it really wears on the relationship.  It causes their spouse or significant other to often feel sick in their stomach when the person makes prideful statements about themselves over and over and over again. Ultimately it causes their significant others to want to separate because of the arrogance and desire for you to bow down to them symbolically.  People with pride want you to idolize them and put them before God. Pride blinds us from seeing any of our own faults and convinces us that everyone else in the world that does not agree with our egregious behavior is wrong. God hates pride:

The fear of the Lord is hatred of evil. Pride and arrogance and the way of evil and perverted speech I hate.

But he gives more grace. Therefore it says, “God opposes the proud, but gives grace to the humble.”

Pride goes before destruction, and a haughty spirit before a fall.

Everyone who is arrogant in heart is an abomination to the Lord; be assured, he will not go unpunished.

There are six things that the Lord hates, seven that are an abomination to him: haughty eyes, a lying tongue, and hands that shed innocent blood, a heart that devises wicked plans, feet that make haste to run to evil, a false witness who breathes out lies, and one who sows discord among brothers.

One’s pride will bring him low, but he who is lowly in spirit will obtain honor.

Rejection – when a person feels like you don’t love them the way they want they will often rise up in anger against you and lie about you to others in order to inflict pain upon you to pay you back for the pain that they are feeling. Often times people separate from them because of their over reaction to other feelings (like when they become jealous) and if they don’t forgive they can turn into an intense hatred and then wanting to harm you.  It all comes back to their unhealed soul wounds which trigger them to reacting in ways that cause people to pull away from them to protect themselves.

Betrayal – when a person feels betrayed they often want to take vengeance upon you to get even with you and cause you to feel as bad as they do. Vengeance is mine saith the Lord and if we decide to take it upon ourselves to pay a person back then it will never go well for us.  God knows the truth and you do not want his face against you.

For the eyes of the Lord are on the righteous, And His ears are open to their prayers; But the face of the Lord is against those who do evil.”

Anger – when we feel angry towards our loved ones – then our spouse no longer feels safe which causes them to pull away farther. It will never turn out well for both parties in a relationship when one person expresses anger.  Usually it causes both to say things to each other out of the anger that they regret saying.  Whenever we allow the enemy to get us into anger or bitterness we are on the enemy’s territory and will say things that are not conducive to staying in peace and love.  The demons will remind each other what was said and then those negative thoughts will ruminate in our minds over and over for hours and sometimes days or weeks or months.

Lying / Dishonesty – when we lie to our loved ones they no longer can trust us and it can take a long time of consistently being honest to earn it back, if ever. Why do people lie? Because their soul wounds from their past are not healed and they are listening to demons give them thoughts to operate in the flesh and then actually doing what they are hearing.  Feeling jealous, rejected, behaving prideful, living sexually impure, and a myriad of other things that they have to lie in order to cover up the sins that they are committing.  When we are delivered then we behave in godly ways and don’t have to lie. One woman was extremely jealous of her husband’s normal interaction with women in ministry and then would explode into verbally abusing him for 5-6 hours at a time.  He finally had no choice but to separate and then she began to lie about him saying that he abandoned her to get people to hate on him instead of choosing to deal with her own soul wounds from her past.  Lying is a tactic that the spirit of Jezebel uses against God’s true prophets and those who are godly and operate in good ministries.

Sexually Impurity – Anytime someone breaks the fidelity of a relationship it can make it extremely hard to come back together and earn back the trust. Some men choose pornography because it is an easier way to receive a release sexually then to have to behave in a controlled way from a wife who operates in the spirit of Jezebel.  Same thing for women who have husbands who are abusive as they can turn to a man who treats them with affection and kindness.  Any time a spouse starts looking too long at a person from the opposite sex or begins communicating or confiding it can open up the door to the enemy.  The solution is to have both husband and wife get healed from their past soul wounds and delivered from the demons whispering in their thoughts and then they can experience an intimacy the way God designed.

Never Apologizing or Behaving Responsible – when a person does wrong and never apologizes for it and owns their own issues then it erodes the love a person has for them and creates contempt for them. Pride is usually at work (spirit of Leviathan in Job 41).

Behaving Competitively – when you compete with a loved one over anything – your relationship will suffer. No one wants to be in a relationship with anyone who is trying to beat them.  If you both have jobs and are competing who can make more money, or competing in church or ministry who can be the most godly then it will not go well.

Taking People for Granted – When we don’t appreciate people then they feel taken for granted and it causes a wedge to develop as the enemy whispers in our minds things that cause division and pushes people into other relationships. Always say thank you and show appreciation for people (especially our spouses) who do things out of a genuine godly heart not expecting anything in return.

Ultimately the solution to heal our relationships is to go back to our past wounds and have Jesus give us a word of insight and healing so that we can forgive all of those who have hurt us.  Then we take away the legal rights of the enemy to torment us in our minds and we can command the demons to go to the pit.  Then whenever we trigger to overreact in response to someone we just need to ask Jesus to come and give us a word to heal from it and then command the demons to go to the pit and resume staying at peace.  Whenever we are not at peace it is always the enemy affecting us either through ourselves or others.