The enemy is planning to make our lives more miserable in the months of September and October as the election nears in the United States.  More people are having dreams and seeing visions of tougher times coming upon us as the enemy knows this is a life or death situation for those who are doing pure evil if President Trump gets re-elected.  Trump is not tolerating those who have done horrible things to children and humans in general and plans to bring justice to them (pedophilia, sex trafficking, abortion, murdering children and over 2,000 children per day are going missing) as well as those who are financially and politically corrupt (George Soros, the Clintons, Obamas, Bill Gates, Hollywood elites, etc.).  That is what this whole Plandemic has been all about.  To incite fear through a virus that is much like the flu in order to shut down the economy and attempt to allow voter fraud through mail-in votes so the Democrats can try to steal the election from Trump.  Then the most evil people in the world can move all of us into their New World Order Socialist government regime controlled by people who have the most evil intentions, trying to depopulate our world through a vaccine and ultimately coming against Christians.

So what is a Christian to do?  Are we to look the other way and allow evil to continue down its course like it has for hundreds of years and throw our hands up in the air?  Are we to get in fear and worry about what the near future holds?  Or are we to get into spiritual warfare prayer and take the authority Christ gave us when He went to the cross and take back what the enemy is trying to steal from us?   The enemy knows his time is short and this is a golden opportunity to try and take over the United States as they know their plan will be stopped by Trump as there are thousands that they have indictments against to bring the bad people to justice.

So it’s time to stand up and be bold and walk in the full authority of Jesus Christ.  Do not submit and bow down to the evil ones trying to take over.  Pray and fast that others also rise up to not submit.  It’s hard because we are all taught to listen and obey our elders and leaders but NOT when they are going against God with an evil agenda.  We are all being tested to see if we will do what the enemy tells us.  Bold church pastors are standing up and having church services because it is the right thing to do.  God wants His people to congregate together while Satan wants to divide under the guise of fear and submission and threats. 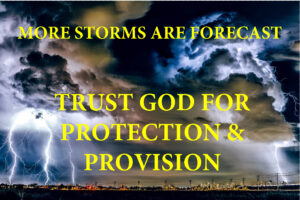 This past weekend I held a BREAKTHROUGH meeting at the Omaha Marriott.  They posted signs to wear masks but I did not wear one the entire weekend and not one person said anything to me.  The city of Omaha also enacted a decree on August 11 that everyone in Omaha was supposed to wear masks in public. I went to the mall on Friday night and walked in not wearing a mask (they also posted on the doors for people to wear them) and no one said anything.  Then I ordered some food at the food court with no mask and got my food and ate it. There is a freedom when you are able to choose to go maskless as you can breathe as God intended us.

We had people come to our BREAKTHROUGH meeting on Saturday night at the Marriott in Omaha and some wore masks to the room but immediately removed them as we worshipped and then I spoke and led people through prayers of deliverance and many got delivered and felt so much more freedom and healing.  Then afterwards I talked with most of the people and they all enjoyed a great night of freedom, joy and healing.  This is a spiritual battle as people are finally waking up to realize that masks are symbolic as a sign of submission and are not designed to keep people from any virus (and some masks are worse than just wearing no mask at all).  People are realizing that this is ridiculous and are no longer believing the propaganda we are being fed as we are seeing that much of the data is false and exaggerated to try to keep people in fear and controlled.  The virus is no more lethal than the ordinary flu as there is a 99.8% recovery rate.

Will the enemy release another virus even more deadly than COVID-19 next?  They could.  They know that if President Trump gets re-elected that it’s over for most of the evil people.  The indictments will be released and mass arrests will happen.  Therefore they would rather cause panic, fear and death in as many people as possible so they can control the election process and fix it unfairly to allow the Democrats to win.

So we all need to be in prayer and faith that the Lord will provide and protect us.  If you are having dreams like most people about what is about to happen next – then make preparations for yourself.  Do not get in fear.   Get right with God.  Repent for your sin and pride.  Forgive people who have hurt you.  Get delivered from the demons that have legal right to torment you.  Vote for people who have your best interest at heart and who are aligned with the party who reveres the lives of babies as the enemy wants to kill them.  Vote for the party who wants to protect you and wants less control over you.  It could not be any clearer this year.  Pray that people’s eyes are opened to the truth and that they blinders and scales are removed from their eyes. Then trust the Lord no matter how bad the circumstances get in the next couple months.  God will provide for His remnant. Remember many people who attend church are NOT God’s remnant. They appear to be a Christian but when the rubber meets the road they are exposed to be fake.

In March 2020 my ministry travels crossed with President Trump’s former personal photographer Gene Ho who followed Trump on the 2016 election rally trail.  Prior to taking the position he was a staunch liberal and voted Democratic.   But after following him around for a year he learned that Trump was the real deal and was actually a man of honor and integrity unlike the liberal media and Democrats would want you to think.  Many have watched the interview and now have a new respect for President Trump as millions of Democrats have changed to the Republican side and now plan to vote for Trump.  You can watch the interview here on You Tube.

I believe that we are about to endure the most persecution we have experienced so far as Christians in the United States as we move into September and October but that many millions of people will have no where to turn but God and repent and then President Trump will be re-elected and lead us into some great things in our nation.  The enemy will not like it and big riots like we have never seen will erupt as they are already planning to stop Trump from staying in office for four more years.  Then I believe that Roe v Wade will be overturned in America and abortion will stop and God will be able to really bless us like never before as the curse of killing babies will be removed (Jezebel sacrificed babies to Molech and was cursed).  So get ready to get in the spiritual battle like never before.  Fast and pray.   Hosea 4:6 states that “My people are destroyed for lack of knowledge….”  God wants to bless us but only when we repent and turn back to Him.  Satan wants to kill, steal and destroy.  We can do this!

5 Trust in the Lord with all your heart, And lean not on your own understanding; 6 In all your ways acknowledge Him, And He shall direct your paths.