JEZEBEL LOVES TO GOSSIP – DON’T LISTEN TO ONE WORD!

People who operate in the spirit of Jezebel love to spread rumors, lies, half-truths and partial truths about their victims in order to get other people to believe them as true.  They do this because they want to get as many people as possible to not listen to their victims or to not agree with them.  Sometimes they do this to get people to hate their victims which allows them to control them more and can cause negative circumstances for them.  All it takes is one person to believe a lie about someone else to cause them to go out of their way to try to convince more people of their lies.  But God knows the truth.

Ahab wanted Naboth’s vineyard but Naboth would not sell it.  So Ahab pouted about it and then when Jezebel heard what happened she devised a plan to kill Naboth by lying about what he said to others and turn them against him. 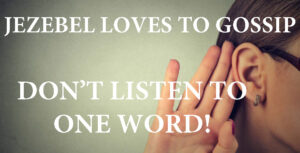 Ultimately Jezebel lost her life by being pushed out of a window by her eunuchs via Jehu’s command and then the dogs ate every part of her body except her palms, skull and feet.

What does the Bible say about spreading rumors, lies or half-truths via gossip?

28 A perverse man sows strife, And a whisperer separates the best of friends.

Interestingly I recently watched an episode of Little House on the Prairie from 1978 called “Whisper Country” in which a woman who had the spirit of Jezebel had accused Mary of flirting with a boy and lied about her to the whole town to turn them against her causing Mary to run away from the town to her father Charles.  The woman actually called Mary a Jezebel which most people with the spirit of Jezebel do (they often refer to people as a Narcissist as well). Then Mary and her father Charles both went back to the town and confronted the woman in front of many of the parents and Mary told the whole truth and the woman had to admit that she lied and did not tell the whole truth.  That is exactly what people do today is to tell lies and twist circumstances to their version in order to try to turn people against their victims.  It’s because they have demons and love to make things up to make people believe that they are innocent and their victims are evil when it is the other way around.

13 A gossip betrays a confidence, but a trustworthy person keeps a secret.

Often times in ministry people talk about private confidential information that they would be greatly embarrassed and hurt by if the information was ever divulged.  When a person gossips and betrays the confidence of another it deeply hurts them and God is not pleased.

29 Let no corrupt word proceed out of your mouth, but what is good for necessary edification, that it may impart grace to the hearers.

10 Warn a divisive person once, and then warn them a second time. After that, have nothing to do with them.

Thus it is not to be tolerated, period.  If you ever hear a person spreading gossip about another tell them to stop and if they do it again then have nothing to do with them.  Usually their life will be ungodly and not in line with the Lord so it’s best to distance yourself from them altogether.  They are definitely not a kingdom person and most likely need healed from their soul wounds and delivered from the demons that they are listening to.

11 Blessed are you when they revile and persecute you, and say all kinds of evil against you falsely for My sake.

When people say all kinds of evil about you and persecute you then understand that you will be blessed by the Lord.  It is not fun to go through but the Lord will often bless you in front of your enemies as we are called to love our enemies and pray for them.