DEMONS CAUSE PEOPLE TO BELIEVE THINGS THAT ARE NOT TRUE

When a person gets hurt growing up (by anyone; fathers, mothers, step parents, siblings, friends, relatives, sexual violations, etc.) demons are given legal access to remind them of all the injustices and pains they suffered so they will not truly forgive the people who hurt them which allows the demons to give them negative thoughts thousands of times a day (National Science Foundation study of 2005 said up to 50-60,000 thoughts a day of which 80% of the thoughts are negative and 95% repetitive of the day before).  The thoughts cause them to feel angry, jealous, prideful, fearful, depressed, suicidal, to control other people and to behave sexually immoral, etc.  Demons also cause them to believe things that are not true about not only themselves but other people who don’t do what they want them to do.  It skews their perception of reality to where they believe a false narrative as truth.  It really ruins their relationships with those who love them because they view them as their enemies instead of those who they have hurt to cause them to pull away from them.  They take an offense at everything which causes their spouse to have to walk on egg-shells every day.

So let’s walk through an example of a typical person’s life and how the enemy affects it.  Let’s say a girl was born under some extra fear and stress at birth or was born pre-maturely.  She will inherit fear from her mother at child birth which causes her to hear the demon’s thoughts as a little girl and throughout her life.  She also feels rejected because she was not close to her mother the first weeks of her life since she was born early. Then let’s say she had a father who was a little harsher on her then he should have been.  So she developed some feelings of failure and more rejection that she was never good enough. Her family all went to church every Sunday but the pastor explained that if you just ask Jesus into your heart that you are saved and no demons are allowed to speak to you anymore.  So she cannot tell anyone that she is hearing negative thoughts thousands of times a day which cause her to have feelings of rejection, jealousy and that she is not good enough to be loved and are trying to get her to search for a boy to love her since her father never showed her any unconditional love.

She wanted to be loved so much as a teenager that she became close to a boy hoping that he would love her unconditionally.  Unfortunately he lied and said he was a Christian but was not pure with her sexually as he pushed her to become intimate with him.  During the time he was dating her he cheated on her a couple of times and then broke up with her and now she feels more rejection as the demons told her how she was not thin enough and was not as pretty as other girls so she developed more image issues, feeling more alone which caused her to try to make herself look better so she could attract another boy that hopefully would love her in a godly way. 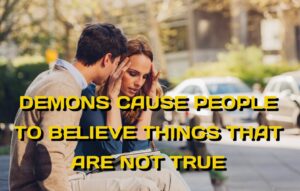 Then she finally got married to a man.  By now she is used to hearing the demons in her thoughts so often that she believes everything that she hears is the truth.  The demons tell her that she cannot trust her husband because he is just like her old boyfriends and father.  Although he treats her very good and is faithful the demons tell her lies thousands of times a day to convince her that she cannot trust her husband. The demons tell her that when her husband tells her good looking girl friend “thank you” for taking pictures of her and her husband that he was being extra affectionate to her and really loved her more than he did herself.  All complete lies.  But she heard it from her demons so she flips out (gets triggered) and she begins to verbally go off on him for several hours.  She then does it again the next week. Then again.  Finally her husband cannot stand it any longer and asks for help from their pastor.  She then lies to her pastor privately by telling him stories that are not true at all but she believes they are true because her demons have convinced her.  Therefore she believes a false narrative as true.  Ultimately she convinces her pastor that she is telling the truth about her husband having an issue with flirting with women.   None of it is actually true.  So her husband separates to try to get her help to change and behave nicely.  But the demons are telling her that it is all his fault because she could not possibly do anything evil.

So she then tells all her friends and convinces them of her lies that she believes are truth.  It eventually causes her to divorce her husband who feels more abused and then she goes to counseling and tells everyone that her ex-husband was a narcissist which could not be further from the truth.  The truth is that she is the narcissist because she has unhealed soul wounds from her past which allows the demons to torment her.  They have caused her to have an alternate personality that is filled with demons convincing her that she is always right and godly and her ex-husband was evil.  Then after the divorce she starts a new relationship with another nice man and then eventually repeats the same controlling and jealous behavior to him ruining yet another relationship.

This is a very common scenario that I have heard thousands of times from couples around the world.  People get wounded growing up and then demons have legal rights to speak to them in their thoughts unbeknownst to them causing them to live in torment with fear, jealousy, anger, pride, etc.  Then they have a couple of alternate personalities that arise which cause them to believe a false narrative of lies.  If you ask the person they are in relationship to describe what their spouse did the day before it will not sound anything like their spouse’s version.

So how do you get a person to see the truth?  Yes some have recorded the various stress-filled arguments on their phones in audio or video so they can play back what actually happened so the person who blows up on them can see or hear it.  It is like the person is temporarily out of their mind in a very real sense.  The demons convince them that how they perceive a situation went down was the truth.  Then when they tell other people about it those people feel sorry for them which only gives the demons even more strength to stay and torment them over and over again with new relationships.

So the best way to help the person is when they start to feel uncomfortable (become offended, jealous or angry) is to have them to stop and stay calm and then command the demonic spirit tormenting them to separate from their soul and then ask Jesus to come to give them insight as to why they are feeling uncomfortable.  Then Jesus will speak to them to give them the truth and then they can command the tormenting demons to go to the pit in Jesus name so they won’t re-trigger again.

If a person has gone through a lot of emotional abuse (or physical or sexual) from their past then they will have several alternate personalities and hear many demons convincing them that they are a victim and never owning their own issues.

3 He is despised and rejected by men, A Man of sorrows and acquainted with grief. And we hid, as it were, our faces from Him; He was despised, and we did not esteem Him.

4 Surely He has borne our griefs And carried our sorrows; Yet we esteemed Him stricken, Smitten by God, and afflicted. 5 But He was wounded for our transgressions, He was bruised for our iniquities; The chastisement for our peace was upon Him, And by His stripes we are healed.

Jesus went through much more abuse then we have and still had to forgive those who killed him.  He was our example and we must forgive everyone who ever hurt us in our past, present and future or else the demons will have legal rights to torment us.

33 And when they had come to the place called Calvary, there they crucified Him, and the criminals, one on the right hand and the other on the left. 34 Then Jesus said, “Father, forgive them, for they do not know what they do.”

And they divided His garments and cast lots.

Jesus was perfect and still had to forgive those who killed him.  So if he can do it then we can do it.  If we don’t do it then the Father cannot forgive us and we will be triggered our entire lives and never get healed and delivered.  We must be honest and own our own issues or they will have legal right to own us.  Demons are real.  Do not give them legal right for even one more day.