PEOPLE WITH DEMONS WANT TO STEAL YOUR PEACE : JUST SAY NO!

Most people in the world hear demons in their minds (through their thoughts) including those who attend church regularly.  Unless they have truly forgiven everyone, who has hurt them in their past and present (and future) and are walking in humility and repent for their own sins then demons have legal right to give them thoughts.  If you listen consistently to a thought from a demon then you will have behavior that is not of Christ.  You will be selfish, sexually impure, prideful, desiring to control other people and make them do what you and your demons want.  The National Science Foundation did a study in 2005 that concluded that some people have up to 50-60,000 thoughts a day of which 80% of their thoughts were negative and 95% were repetitive of the same negative thoughts they had the day before.  These are thoughts coming to them from demons to ruin not only their lives but to infect all of their other relationships.

When you hear an entire thought / sentence from a demon you will be negatively affected.  You will get in fear and anxiety, feel angry, jealous, desire something sexually impure, want to make someone do what you want,  hurt someone, lie, etc.

3 For though we walk in the flesh, we do not war according to the flesh. 4 For the weapons of our warfare are not carnal but mighty in God for pulling down strongholds, 5 casting down arguments and every high thing that exalts itself against the knowledge of God, bringing every thought into captivity to the obedience of Christ, 6 and being ready to punish all disobedience when your obedience is fulfilled.

So let’s say that you have spent time going through getting yourself healed from all of your past soul wounds from people, forgiven them truly in your heart, humbled yourself from pride and walk in the fruit of the spirit on a regular basis.  You will have a lot of peace in your life because you will not be hearing demonic thoughts pummel you thousands of times a day.

22 But the fruit of the Spirit is love, joy, peace, longsuffering, kindness, goodness, faithfulness, 23 gentleness, self-control. Against such there is no law.

So Satan’s goal is to steal your peace from you and he will use people and circumstances to do it.  It’s up to you to discern when a person tries to speak into your life words that will steal your peace and then stop listening or reading their message.  If you let just one demonic person to speak  just one sentence (via spoken, text, email, voice message, private message) to you then it will affect your peace for the entire day, several days or weeks or longer.  What happens is that when you read or listen to their message then your thoughts will remember what was said or written and then remind you of it again and again, often times you will hear the written word in the voice of the person who wrote it.  You will feel their threats, demands, coercion, fear instilled, trying to cause you to obey them and do what they say.   This can then cause you to feel the effects for a long time, stealing your peace, your sleep and your ability to focus on tasks at hand. 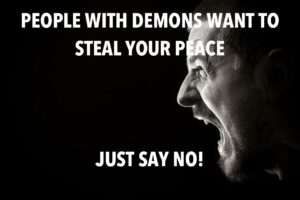 Jesus did not like to hang around people with demons who He knew did not want delivered because they would try to come against Him and steal his peace.  The Pharisees and scribes would always try to speak words to engage with him drawing Him into a debate wasting His time and trying to make Him look bad.  They ultimately wanted to steal, kill and destroy Him as the demons in them hated Him.

27 Then they came again to Jerusalem. And as He was walking in the temple, the chief priests, the scribes, and the elders came to Him. 28 And they said to Him, “By what authority are You doing these things? And who gave You this authority to do these things?”

29 But Jesus answered and said to them, “I also will ask you one question; then answer Me, and I will tell you by what authority I do these things: 30 The baptism of John—was it from heaven or from men? Answer Me.”

31 And they reasoned among themselves, saying, “If we say, ‘From heaven,’ He will say, ‘Why then did you not believe him?’ 32 But if we say, ‘From men’ ”—they feared the people, for all counted John to have been a prophet indeed. 33 So they answered and said to Jesus, “We do not know.”

And Jesus answered and said to them, “Neither will I tell you by what authority I do these things.”

The Parable of the Wicked Vinedressers

12 Then He began to speak to them in parables: “A man planted a vineyard and set a hedge around it, dug a place for the wine vat and built a tower. And he leased it to [a]vinedressers and went into a far country. 2 Now at vintage-time he sent a servant to the vinedressers, that he might receive some of the fruit of the vineyard from the vinedressers. 3 And they took him and beat him and sent him away empty-handed. 4 Again he sent them another servant, and at him they threw stones, wounded him in the head, and sent him away shamefully treated. 5 And again he sent another, and him they killed; and many others, beating some and killing some. 6 Therefore still having one son, his beloved, he also sent him to them last, saying, ‘They will respect my son.’ 7 But those vinedressers said among themselves, ‘This is the heir. Come, let us kill him, and the inheritance will be ours.’ 8 So they took him and killed him and cast him out of the vineyard.

9 “Therefore what will the owner of the vineyard do? He will come and destroy the vinedressers, and give the vineyard to others. 10 Have you not even read this Scripture:

‘The stone which the builders rejected Has become the chief cornerstone. 11 This was the Lord’s doing, And it is marvelous in our eyes’?”

12 And they sought to lay hands on Him, but feared the multitude, for they knew He had spoken the parable against them. So they left Him and went away.

The Pharisees: Is It Lawful to Pay Taxes to Caesar?

13 Then they sent to Him some of the Pharisees and the Herodians, to catch Him in His words. 14 When they had come, they said to Him, “Teacher, we know that You are true, and care about no one; for You do not regard the person of men, but teach the way of God in truth. Is it lawful to pay taxes to Caesar, or not? 15 Shall we pay, or shall we not pay?”

But He, knowing their hypocrisy, said to them, “Why do you test Me? Bring Me a denarius that I may see it.” 16 So they brought it.

And He said to them, “Whose image and inscription is this?” They said to Him, “Caesar’s.”

And they marveled at Him.

The Pharisees and Scribes hated Jesus with their demons and wanted to get Him into a discussion that would implicate Him so they could kill Him but they could not outwit Him.

12 In the meantime, when an innumerable multitude of people had gathered together, so that they trampled one another, He began to say to His disciples first of all, “Beware of the leaven of the Pharisees, which is hypocrisy. 2 For there is nothing covered that will not be revealed, nor hidden that will not be known. 3 Therefore whatever you have spoken in the dark will be heard in the light, and what you have spoken in the ear in inner rooms will be proclaimed on the housetops.

So many people today are modern day Pharisees trying to ‘Jezebel’ people who are godly into wasting their time, lying about them and condemning them to stop them from truly helping get people healed, delivered and freed from the enemy when they themselves are hypocrites.  So the best thing to do is to avoid all contact with people who desire to engage you in words, whether spoken or written.  Just say no to wasting any of your precious time on those whose goal is to create havoc and steal your peace or instill fear.  Jesus spoke the truth and then tried to minimize wasting His time with the Pharisees as He knew their hearts were impure and they had demonic spirits coming against Him.  If someone tries to come against you constantly on social media then don’t waste any time on them as their goal is to create strife for you – just block them.

28 So all those in the synagogue, when they heard these things, were filled with wrath, 29 and rose up and thrust Him out of the city; and they led Him to the brow of the hill on which their city was built, that they might throw Him down over the cliff. 30 Then passing through the midst of them, He went His way.

So just pass through the midst of people whose assignment is from Satan and go about doing your assignment in Jesus because you don’t have time to waste it on people whose whole intention is to come against you.  If they are ready and want help then you can take time for them.