DON’T BE DUPED BY THE VICTIM MENTALITY SPIRIT

When people get hurt growing up they often hear demonic spirits in their minds / thoughts which cause them to desire to receive sympathy from other people.  They literally want people to feel sorry for them because they love to receive special treatment and attention.  Often a parent can exacerbate the issues by treating them like a little girl or boy and not allowing their consequences to teach them lessons to change.  They are called helicopter parents for hovering over them trying to help them out of any mess that they get into because of their own doing. Many use it to play on people’s heart strings and emotions to have them give them money and other financial benefits.  It is the “poor, poor pitiful me – please feel sorry for me because I am so innocent and abused and need you to help me by giving me your money” attitude.   Often times they have been hurt in their past but then hurt other people who have had relationships with them and then those people separate from them due to the abuse.  Then they lie about those who separate from them to be able to live in peace to get others to feel sorry for them and then get money from them.  They are masters at acting and playing the victim card.  They have pride because they want people to feel sorry for how much they have been hurt and suffered.

They often live their entire lives lying to many people to play on their mercy hearts and have people give them financial gifts, have fundraisers on Facebook, donate clothes, appliances, even cars and homes to them.  If they are a woman they will subtly seduce men to give them money by touching their arms or shoulders or talking softly or like a little girl to them.  If they are a man they will often act like they are so sad and needy and subtly seduce a woman by telling them that the Lord highlighted them and if you could just sow into their lives or ministry.  The truth is that people with the victim spirit know how to play your heart strings like a guitar because they are hearing demons tell them what to do and say.  They are fakes and will use you.

How can you discern when a real person is in need – usually because they will not say anything to anyone, especially publicly on social media.   They are discreet and truly humble. They may say something privately to a close friend but they would feel wrong to try to go public on social media.  Whereas those with the victim spirit will have no problems asking for money consistently on social media and might even cry fake tears to sell it more.  They have false humility. They are liars and fakes and have no godly integrity and don’t see it as a problem trying to fleece their public.  Often times they live a more lavish lifestyle if truth be known and waste their money on frivolous vain pleasures. 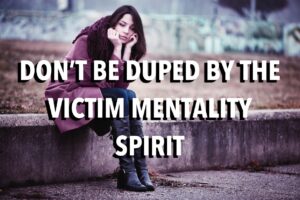 So pray about a person before you give them any money, especially if they are asking for it over and over again.  When people are bold enough to put it out there on social media they usually are exposing that they have an underlying spiritual issue and want you to absolve them from taking responsibility for it.  They often live a lifetime of expecting others to help them out of their jams when they need to look inward and upward to God and deal with why they are unable to live a more godly life.  They need to pursue inner healing and deliverance from their issues from their past. They need to be honest and stop blaming all their problems on others and look in the mirror at themselves and ask Jesus “What do I need to change?”  They need to own their own issues instead of allowing their issues to own them and expect others to pay for their issues.

When a person comes to Restored to Freedom for help – if they go through a couple of months of watching videos for deliverance but then continue to say words wanting sympathy for their past hurts – it is a clear sign that they need more deliverance and inner healing.  It is one thing to know when you were hurt from the past and are explaining what happened to people trying to help you to forgive those who hurt you but when it persists on and on after several months then the demons are still talking to you trying to get you to feel sorry for them.  As long as you continue to treat them like a little baby or girl or boy – feeling sorry for them – then the demons will not have any legal rights to leave them.  They will enjoy all the sympathy and pity parties and the more they can get the better.  So at that time it is best to pull back from them and wait until they are willing to stop blaming everyone else and taking responsibility for themselves today.  Love them from afar and tell them you will pray for them but don’t let them drain your time of hours each day and week.  If you give money to them you are prolonging them getting delivered and free.  There is purpose in the pain as the Lord is trying to get their attention and if you keep helping them out of it – they never will take responsibility for their decisions.

10 For even when we were with you, we commanded you this: If anyone will not work, neither shall he eat.

John Gardner says, “Self-pity is easily the most destructive of non-pharmaceutical narcotics. It is addictive. Gives momentary pleasure and separates the victim from reality.”

Charles Shields says, “Self-pity is a sin. It is a form of living suicide.”

A Man Healed at the Pool of Bethesda

5 After this there was a feast of the Jews, and Jesus went up to Jerusalem. 2 Now there is in Jerusalem by the Sheep Gate a pool, which is called in Hebrew, Bethesda, having five porches. 3 In these lay a great multitude of sick people, blind, lame, paralyzed, waiting for the moving of the water. 4 For an angel went down at a certain time into the pool and stirred up the water; then whoever stepped in first, after the stirring of the water, was made well of whatever disease he had. 5 Now a certain man was there who had an infirmity thirty-eight years. 6 When Jesus saw him lying there, and knew that he already had been in that condition a long time, He said to him, “Do you want to be made well?”

7 The sick man answered Him, “Sir, I have no man to put me into the pool when the water is stirred up; but while I am coming, another steps down before me.”

8 Jesus said to him, “Rise, take up your bed and walk.” 9 And immediately the man was made well, took up his bed, and walked.

And that day was the Sabbath. 10 The Jews therefore said to him who was cured, “It is the Sabbath; it is not lawful for you to carry your bed.”

12 Then they asked him, “Who is the Man who said to you, ‘Take up your bed and walk’?” 13 But the one who was healed did not know who it was, for Jesus had withdrawn, a multitude being in that place. 14 Afterward Jesus found him in the temple, and said to him, “See, you have been made well. Sin no more, lest a worse thing come upon you.”

15 The man departed and told the Jews that it was Jesus who had made him well.

Jesus got straight to the point with the man at Bethesda.  He asks him if he really wants to be healed.  He didn’t listen to him lament about his current situation that lasted 38 years.  He wanted to know if he really wanted to be healed and then told him to rise, take up his bed and walk.  Immediately the man did and he was healed.  There are many people who don’t truly want to be healed or to take responsibility for themselves as they enjoy all the sympathy and pity parties they receive.  I know of some people who don’t want to be healed of physical issues or diseases because then they would have to come off of disability with the government and actually have to work. It’s time to just say no and stop allowing yourself to be used by people who have no intentions of taking responsibility for their bad choices as you are prolonging them of getting truly delivered and freed.