It’s amazing to see how far society has fallen since I was growing up as a child in the 1970’s.  When I was young if you did something bad you took responsibility for it.  You also received consequences if you didn’t fix it to make it right.  Of course I grew up in the country in northern Indiana and would get spanked (or usually swatted with a switch) if I talked back to my parents or did something bad that was worthy of a switching. Today people are hearing so many demons give them thoughts and then acting on it and behaving horribly and have so much pride that even when they get caught in the act they try to blame others for it.

Remember last week when the video came out that Nancy Pelosi was getting her hair done without a mask at a salon and then 2 hours later she was scolding people for wanting their hair salons to be open and that they needed to wear masks. So instead of apologizing for the hypocrisy she walked in (do what I say not as I do) she actually said she got set up and blamed her beautician who received death threats!  What in the world? It is truly amazing that people today can blame other people for the hypocritical behavior that they actually do but that is what demons do.

People who struggle with operating in the spirit of Jezebel will constantly do evil things (yelling at others, lying, controlling and manipulating people, doing sexually perverse things, falsely accusing others, etc.) and then when they get found out for doing something evil will not take responsibility for it.  They will twist things so much to blame their victims and act like they were the victim.  It is truly amazing to witness the audaciousness of their pride.   Demons cause people to believe that they are perfect and anyone who comes against them to disclose the evil that they are in are the bad guys.  That is why it is so hard to hold people accountable today is because they will weasel their way out of taking any responsibility for the sin that they were in and because those who are operating in a demonic life will have friends that operate in the same way – then people will have their backs to cover them up and protect them as like spirits look out for each other.  People who rape or molest other people can even get out of it by crying racism. 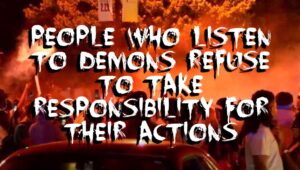 So how are we to deal with people who don’t take responsibility for their negative actions?  One thing is to not have relationships with them as soon as you become aware of their deception and lies.  If you engage with someone who is demonic then they will hurt you, lie about you, abuse you emotionally or worse, and never take responsibility for what they do.  Now you may say that it would be impossible to totally have no relationships with people who behave in demonic ways – and that is probably true – but when you know absolutely that the person has lied to you, betrayed you, lied about you, tried to control you, etc. then you better part ways to protect yourself or you will get burned again.  The sad part is that many of these people will connect with people who have good mercy hearts and use and abuse them.  Jezebel (Narcissists) loves to try and marry people who are loving, kind and sweet, especially if they are anointed by the Lord in order to stop them from their callings.  Then you must make the choice if they refuse to get delivered – will you submit to the demons in them or to God?

While we cannot force people to be responsible we can surely not enable or tolerate their demonic behaviors.  God warns the people in Revelation of tolerating behavior that is not of God.

Keep in mind that people who operate in demons are very good at lying. They lie so much that their demons get them to believe that they are telling the truth.  Those who are actually God-conscious will usually not lie or take much more responsibility which gives the Jezebel infected person an advantage when it comes to living every day in their lying world.  But God knows the truth and it is up to us to discern it.  God especially is not happy with people who are in the church and act like they are godly when they are not and they are hurting other people instead.  He hates it.

These are all characteristics of people who operate in the spirit of Jezebel and Leviathan and God gives them time to repent but when they won’t He will give them consequences.

So even though it looks like people who operate in demonic evil ways are getting away with things – they cannot fake out God.  Focus your efforts on doing good and giving those who do evil to the Lord.  While it’s no fun to be lied about – when you suffer for doing good for the Lord – He sees it and will bless and honor you and those doing evil will be held accountable by God as they will never have peace.

8 Finally, all of you be of one mind, having compassion for one another; love as brothers, be tenderhearted, be courteous; 9 not returning evil for evil or reviling for reviling, but on the contrary blessing, knowing that you were called to this, that you may inherit a blessing. 10 For

“He who would love life And see good days, Let him refrain his tongue from evil, And his lips from speaking deceit. 11 Let him turn away from evil and do good; Let him seek peace and pursue it. 12 For the eyes of the Lord are on the righteous, And His ears are open to their prayers; But the face of the Lord is against those who do evil.”

18 For Christ also suffered once for sins, the just for the unjust, that He might bring us to God, being put to death in the flesh but made alive by the Spirit, 19 by whom also He went and preached to the spirits in prison, 20 who formerly were disobedient, when once the Divine longsuffering waited in the days of Noah, while the ark was being prepared, in which a few, that is, eight souls, were saved through water. 21 There is also an antitype which now saves us—baptism (not the removal of the filth of the flesh, but the answer of a good conscience toward God), through the resurrection of Jesus Christ, 22 who has gone into heaven and is at the right hand of God, angels and authorities and powers having been made subject to Him.