So many people around the world are getting Jezebelled by people who make accusations, lies and slander them, often publicly on social media.  The spirit of Jezebel loves to accuse people of lies and slander them publicly because they believe it will cause people to believe their lies and join in their hating of their victim.  What usually happens is that those who also struggle with the spirit of Jezebel who have like spirits as the Jezebel – will often believe them, but those who are godly will see through their lies and dismiss them and support the victim.  You see it all the time in politics when the liberal media makes false lies to slander a good person’s character or reputation to make people believe things that are not true to stop them from being re-elected or winning the support over various issues.  Many Democrats will Jezebel Republicans even though obviously not every Republican is godly.

When people attack you and lie about you to others, while it is not enjoyable that some people will believe the lies, the Lord knows the truth and that is really all that matters.  Often the Jezebel has unhealed soul wounds and the demons in them convince them that their false narrative is true.  So they will come up with big lies believing them to be truth in order to hurt godly people and turn others away from listening to them believing they are bad. Usually other Jezebels will believe the initial Jezebel lie or slanderous statement and team up like witches trying to sacrifice their latest victim.  But God ultimately knows the truth.  So the best response is none.  You may even be able to laugh at the ludicrousness of the false claims. Jezebel loves to use social media to try to gain a consensus but those who are of the Lord and hear His voice will usually choose not to read or listen to them and the only ones who do participate are those who are ungodly who want to believe the worst because the demons in them hate godly and pure people.  Like spirits attract.  Demons in people love to connect and protect others who have demons and come against those who are godly.

Jezebel also loves to threaten a person to create fear in them that they will “expose” them if they don’t do what they want.  Truth be told – their actions of exposing usually cause them to look like Jezebel and those who are of the Lord don’t believe them and those who are other Jezebels will try to attack the victim but ultimately when God knows the person is good then they will get stronger for the attack and be promoted higher and receive a stronger anointed thus causing the Jezebel’s attacks to get reversed and causing them more frustrations.  That is why it is important for everyone to align their lives with the Lord, live a godly, righteous life and then let the Lord defend you when Jezebel attacks.  If people come to you to ask the truth of you in person then you should always share the truth – but keep things off of social media because it just doesn’t feel good to share the details of the truth publicly.  God will bless you when you suffer injustices and do nothing wrong. 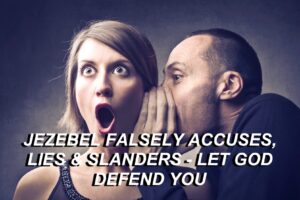 Vengeance is the Lord’s not ours.  People with Jezebel will try to take things into their own hands by usually speaking to as many people as they can to get them to join them in hating their victim who won’t do what they want.  They become the offender and develop bitterness in their hearts and even a murderous spirit.

15 Whoever hates his brother is a murderer, and you know that no murderer has eternal life abiding in him.

19 Beloved, do not avenge yourselves, but rather give place to wrath; for it is written, “Vengeance is Mine, I will repay,” says the Lord.

So when you are in the midst of a Jezebel attack – understand that God knows the truth and as you allow Him to defend you publicly and do not defend yourself – that He will defend you perfectly.  Anything that you do to try and take things into your own hands – will usually have negative circumstances.  Count it all joy when you are enduring such negative circumstances knowing that God knows the truth and will be working all things together for the good of you and will deal with those who are doing evil to you.  Most people who are Jezebel are convinced that they are doing right by lying and slandering people but it could not be more of Satan as they are hearing from demons and exposing themselves to anyone who will listen.

12 For the eyes of the Lord are on the righteous, And His ears are open to their prayers; But the face of the Lord is against those who do evil.”

So the best response to those who are lying about you is no response.  Then let God bless you before your enemies and all will see that you were blameless (assuming you were) and they were liars.  Nothing is more sweet when God promotes you for your suffering and the evil one’s must deal with their circumstances and correction from the Lord.  Just keep on moving up the mountain and let the fiery darts of the enemy fly through you.  As you become more Christlike the more God will protect and provide