Last Thursday I drove from Indianapolis, IN to Richmond, VA for a ministry event on Friday and the Lord told me to specifically look for the various political signs in the yards of Americans along the way as I would see what was happening in America concerning the presidential election.  My expectations were that I would see maybe 30% of the yards would have signs that were pro-Biden and 70% in favor of President Trump knowing that much of my drive would be in rural areas versus inner city where the Democrats are more typically positioned.  To my shock I did not see one pro-Biden sign and saw about 50 pro Trump signs.  The Lord told me that Trump would win the election even with the Democrats doing everything that they could to try and steal the election.  God’s hand was upon Donald J. Trump and he would finish what he started in cleaning up the deep state corruption that had been going on for decades.  The George Soros funded rioters would then try everything to force their evilness to take over after Trump is re-elected but would be squelched and imprisoned as justice would be enforced.

What I was sensing was occurring was that God was using a man that prior to the 2016 election no one would have guessed would have been so pro-godly in his actions (pro-life, justice against those involved in sex-trafficking and pedophilia, exposing the evil in the world and fulfilling pro-Israel legislation, etc.) which is such a God thing.  How many people in the Bible did God use that man would not have picked.  No one would have picked David to defeat Goliath and even when David slept with Bathsheba and set up her husband to be killed in battle – the Lord still used David after he repented as he had a heart after God’s own heart for people.  Moses was a stutterer yet had the heart of God to lead a million people out of slavery to their freedom.  Samson was a philanderer but was used to conquer the Philistines and even when he messed up against Delilah God redeemed him by killing more Philistines at the end of his life.   God loves to use people for His purpose that man would discount and look down upon – to show that he looks upon the person’s heart and when it aligns with God’s heart – great things can happen. 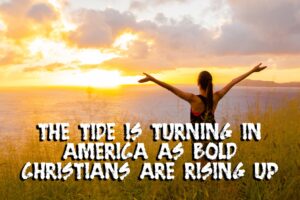 The Lord had me do my Facebook LIVE from the White House in Washington, DC last Friday and wanted me to thank the policemen and women by telling them I appreciated them.  So many of them were so grateful and truly appreciated the kind and loving gestures.  They were African American, Hispanic, White, male and female.  A young policeman told me that they had closed down the south lawn access to the White House so I would have to do my Facebook LIVE from the north side.  When I arrived on the north side I noticed the usual number of people who were trying to get their cause of choice displayed.  Some were against Trump, some were against nuclear weapons, some were for Black Lives Matter, one woman was singing Christian songs from a loud speaker and talking about repentance.  I noticed many people who arrived who were getting pictures with the White House in the background. I offered to take the pictures of people so they could all get in the photo and everyone was so thankful.  One family came all the way from Cuba.  One African American man saw me taking pictures of everyone and asked me if I would take a picture of him and I said absolutely.  He was wearing a black shirt with Black Lives Matter on it.  His phone screen was severely cracked and I could barely see through it but made sure I zoomed in on him so I could avoid seeing some construction equipment and could clearly see him with the White House in the background.  He thanked me for it.  Then another African American couple wanted me to take pictures of them which I did and later I learned that he used to be homeless but had an encounter with Jesus and now is saved and loves the Lord.  Later as I was broadcasting on Facebook LIVE a woman was talking about repentance and Jesus.  Then I walked to where the Black Lives Matter street was just north of the White House but I didn’t see any protesters or rioters as you could only see their signs and graffiti on the walls.

Then I turned onto 17th Street NW (17 means overcoming the enemy and complete victory as Christ rose from the dead on Nisan 17) and heard Christian music being played by an African American woman.  Then a few minutes later I just happened to notice a 5-star General entering a secured area of the Eisenhower Executive Building so was able to video record him on my Facebook LIVE.  Then less than two hours later saw the General with President Trump at his press conference.  As I continued walking I was finally able to walk onto the South Lawn as I found an opening in the makeshift fence and saw more people going for walks and sitting on park benches.  I had also earlier walked around the Lincoln Memorial Reflecting Pool and took a picture of a sweet couple and they asked me what I was doing there and I told them about my ministry that helped people who have had wounds from their fathers or mothers or step parents or other people or sexual violations to have more peace through forgiveness and they were so happy to hear of what God was doing.  I sensed a peace in the nation’s capital that the liberal news networks and those with socialist agendas do not want people to believe.  I sensed that this election is exposing the true evil vs good much more clearly than ever before in U.S. History.  I sensed that the true bold Christians who had been silently allowing those with ungodly agendas who yelled and threatened the loudest – were now rising up to no longer sit by and allow those who hate America to take us down.  They were now taking action and overcoming the fear that the enemy had instilled in the past to speak the truth in boldness.

Then on Friday night in Richmond, VA a married couple who had separated and had not talked to each other since April attended my BREAKTHROUGH event and after the prayers and deliverance session began talking as their hearts and souls were healed and they were rekindling the love that was broken.  They were smiling at each other and laughing and stayed around for over an hour after it was over and helped me load up my books.  I prayed for them to have no strife in their marriage anymore and to be used to help other hurting couples to heal.

As I left Virginia for Hilton Head Island, SC for my next ministry event on Saturday night I sensed the Lord was showing me that His true Christians, the remnant, are rising up to be bolder and no longer allow those who yelled the loudest in an ungodly voice to get their way.  To stand strong for Godly values and to proclaim that they will not bow down to the evil in others no matter how evil that they behave.  God’s will is being done on earth as people align their lives with Him. They are choosing to forgive people who hurt them, repent for their pride and sin and starting a revival within themselves which is carrying over to others in America.  I have been overwhelmed to see the responses of people to my Facebook Ads which are drawing them to our BREAKTHROUGH events in Marriott properties around the country as they are hungry for truth and true life changing and marriage saving results.

I believe that America will rise up and tell the evil people who have taken over the Democratic party who want to destroy America that we will not allow you to take us down.  True Christians are rising up to those who have tried to brainwash Americans on the liberal news networks and on American colleges to no longer believing their lies.  So we declare that the scales are removed from the eyes of those who are spiritually blinded to the truth and expose all demonic agendas and declare that President Trump will win in a landslide and those who have been operating in the deep state and evilness will be brought to justice once and for all. Then we declare that America will be blessed and that continued true repentance will be pursued by those in the church and outside the church.  In Jesus name, Amen!