KEEP YOUR FAITH ON WHEN YOUR CIRCUMSTANCES LOOK THE OPPOSITE

Hebrews 11:1 states that “Now faith is the substance of things hoped for, the evidence of things not seen.”  I actually wrote a book called “Keep Your Faith On” in which I talk about what faith really looks like.  How not to look on your current circumstances that did not line up with what you were expecting or what was prophesied over you. In reality things in my personal life looked totally the opposite of what was prophesized over me yet I continued to believe that I would see those things prophesied to come to pass.  The key for me was to not allow the enemy to speak to me in my thoughts.  He would try to say things that would come against me but I began to shut down the lying voices and only declare what I believed would come to pass and then eventually over time things would change and begin to line up.

When God speaks to us or through other people or a dream it is with the purpose of showing us what could come to pass.  It is our responsibility to do what we need to do in order to see it come to pass without allowing the enemy to speak to us to discourage us and to get us to give up before seeing it manifest.  I never heard from the Lord in my life until 2008 and 2009 when the Lord started to tell me about who I really was and to begin to guide me into my future.  When I had three prophetic men prophesy over me in January 2009 at a Morris Cerullo conference about having a worldwide ministry I could not imagine how that would ever occur but it planted a seed within my spirit that if God really wanted me to do that then I was up for the challenge and considered it an honor.  Then the Lord had me marry a woman who was deeply hurt in her life and said I would love her like Christ loved the church.  But then right after I married her I began to be attacked by her verbally, emotionally and eventually physically for the next six years.  She acted godly in front of the church and others but behind closed doors she had much anger and hatred for me that was because of other people before me.  It was impossible to see how the prophetic words spoken over me would EVER come to pass. 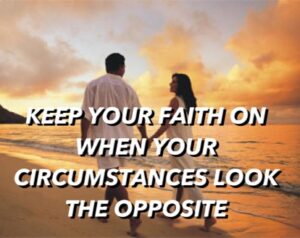 Then after the six years of extreme abuse and pain the Lord had me separate and I hoped she would get delivered but she refused to be honest and then divorced me after lying to other people.  I was devastated and sad. Nothing in my life at that time looked like I would ever have any ministry.  But I heard what the Lord told me and He continued to tell me that He would be faithful and just to see it come to pass if I would only believe.  Then He explained to me what happened the past six years and why my ex-wife treated me so badly. He talked to me about the spirits of Jezebel and Leviathan attacking her and then she attacked me.  That the majority of marriages in the world were in strife and misery because of the spirits of Jezebel / Leviathan in one person attacking another who struggled with the spirit of Ahab.  He explained that when people get hurt growing up that they will have anger and bitterness in their heart and they need to forgive others from their heart, humble themselves from their pride and repent.  Then they could command the demons to be gone and change into a loving and kind person with the fruit of the spirit evident and a loving heart and mind.

So I began to travel and speak around America and wrote 9 books and before I knew it there were people around the world who began to follow my Restored to Freedom ministry and see major changes in their personal lives and many saved their marriages from strife and divorce.  Often times when a person receives a great word from the Lord their circumstances don’t look anything like it could happen to come to pass.  Also their circumstances often become worse and then it really tests your faith to believe that it will ever come to pass as the enemy can often get people to give up in believing and then the word never manifests.

The United States just had their election on Tuesday, November 3, 2020 and they did not announce the winner between Trump and Biden.  The prophets around the world had been told by God that Trump would win but that it would not be easy.  That the Democrats would attempt to steal the election through voter fraud. Many of the people who looked upon the circumstances would have thought that Biden would win it – yet those with stronger faith would not look at the circumstances and stay believing that Trump would win.   When you hear from the Lord and know that you know that God told you the truth then it does not matter what the circumstances look like. In fact most times God loves to surprise people so that the miracle He does is even more impressive when it finally manifests.

Remember when Moses took the Israelites out of Egypt.  As the Pharaoh chased them down with their chariots it appeared that there would be a great slaughter as the Red Sea blocked them from going forward.  Then at the last minute the sea opened and they were saved while the Egyptians were all swallowed up in the Sea as God allowed it to close back up on them.  Remember when David was selected to battle with the giant Goliath.  Anyone would have never have guessed that David would have won with just a slingshot and stones.    The Lord loves bold faith and when He tells you something is going to come to pass – as long as you continue to have faith and believe and do your part in actions – it will.  I have seen it in my life and know that there are many more greater things getting ready to come to pass to affect millions of lives for Christ in getting the masses delivered and freed.  God loves us and the only true way to love the Lord is through our faith in him.  Keep your faith on and never speak negatively into your current circumstances.