God loves it when people who are controlled, oppressed and abused eventually overcome those who are controlling, oppressing and abusing them.  When the tables are turned. Time after time in the Bible are stories of God’s people who were being hurt by Satan’s people for a season and it looked like they would be either stopped, shut down or even killed when at the last minute they overcame their enemies and in many cases were elevated in position over them and also promoted into top leadership over an entire nation.  God loves those who have His pure heart who have sacrificed and suffered greatly while doing His will to eventually be repositioned to a place of authority over those who were coming against them.

Joseph was sold out by his brothers to become a slave in Egypt who ultimately received favor and got promoted over the household of Potiphar, one of Pharaoh’s officials.  Potiphar’s wife tried to seduce him sexually but he did what was right in the Lord’s eyes and ran from her.  She then lied to her husband Potiphar about Joseph to blame him. Potiphar then put him in jail for over 2 years.  Things looked pretty dark for him during this season.  If you were an outsider looking at his situation you would have said that he was not blessed by God and was a failure.  Yet Joseph didn’t look upon his circumstances or give up and hate God – instead he trusted the Lord and eventually was asked to help Pharaoh interpret his dreams which were about the upcoming 7 good years that they would have followed by 7 bad years in the land.  Suddenly Joseph’s circumstances shifted and he was promoted as the number two man in all the land of Egypt and ultimately was blessed greatly and was able to help his brothers and father who needed food to come live with him as he forgave them for selling him due to their jealousy over Joseph’s earlier dreams which showed his brothers bowing down to him.  So often when you are told a prophetic word or given a vision of great things…you will go through circumstances that are totally contrary to your prophetic word, dream or vision for many years as the Lord wants to see if you truly have faith to believe what He said would come to pass would indeed manifest.  God is also preparing to change you in a deep way to be able to handle the new position that He has for you as you need to have a humble, contrite and pure heart. 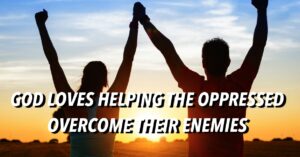 Haman got himself promoted by King Ahasuerus into a position over all the princes who were with him (Esther 3).  Haman had evil intentions in his heart. All of the king’s servants paid homage to Haman for the king commanded them, but Mordecai refused to bow to him.  When Haman saw that Mordecai refused to bow to him or pay him homage he was filled with anger, hatred and wrath.  So Haman told the king that there were a certain people who refused to keep the king’s laws and that they needed to be destroyed for he hated the Jews and wanted to kill all of them.  The king agreed and Haman was going to pay 10,000 talents of silver to those who were to kill all the Jews so they published a document to make it a law. Haman then built a gallows to hang Mordecai on because he hated him in particular.  When Mordecai learned about this plan he told Esther who was married to the king to see if she would warn him of Haman’s plans.  Esther told Mordecai to tell the Jews to fast and pray for her as she was going to tell the king of Haman’s evil plot.  So Esther approached the king in the court and it pleased him and he said he would do anything for her – even giving her up to half of the kingdom.  So then she asked to have a banquet and invite Haman to it so they did.   It was then that Queen Esther told the King of Haman’s plot to kill her and the other Jews and when the King heard it he was furious.  He ended up hanging Haman on his own gallows and then promoted Mordecai to take over Haman’s position and house and ultimately the Jews killed all those who had planned to kill them.

There are many other stories in the Bible where the circumstances looked very bad for people only at the last minute to see things suddenly change and the plans of the evils ones were overturned and they were held responsible for their evil plans and those who were being oppressed were promoted.  Daniel had his haters who planned to kill him and was thrown into the lion’s den only to have God protect him and then the next day King Darius promoted him and took his enemies and threw them and their families into the lion’s den and were immediately killed.  David overcame Goliath and suddenly the Philistines had to serve God’s people.  Moses and the Israelites were rescued suddenly when certain death at the hands of Pharaoh and his soldiers appeared imminent as the Red Sea opened to allow the million Hebrew people to cross over and then the sea covered up Pharaoh and his army to kill all of them.

So last Saturday morning when it appeared that Joe Biden might steal the election by having his people count fraudulent ballots from deceased people, throwing out votes for President Trump, not allowing Republicans to oversee the counting process and other corrupt tactics, the Lord told me that He was going to expose all the evil that the Democrats had done for all the world to see and hold them accountable.  That Trump would demand a recount to prove that he had rightfully won the election and show that Biden and the Democrats cheated (which totally explains why Biden rarely campaigned and had just a handful of people who would come out for him while Trump had tens of thousands who supported his rallies – because Biden knew he would win with the cheating tactics they had planned).  Once the vote ballot recount has completed that it would show that Trump won the various states that were close (Georgia, Pennsylvania, Michigan, Wisconsin, Arizona) and ultimately he had won the election.  Then the Democrats that were responsible for all the cheating would be held accountable and receive consequences for their actions.  The Democrats know that this will happen and that once the election is called for Trump will then send out their paid rioters to try to create fear and chaos which will cause Trump to then call in the appropriate National Guard and other forces to stop the rioting and move forward into 2021 with helping the country to walk in peace and holding those who operated out of corruption responsible and there will be many put in prison and have other consequences.

Just like the Bible – people who operate out of an evil and ungodly heart – such as Jezebel who tried to kill the prophetic voices, kill innocent babies and lives of those who stood in her way (Naboth for his vineyard) – will have a day of reckoning.  The prophets of the world all heard the Lord tell them that Trump would ultimately win re-election and hold those accountable who were operating in deep evil and sin oppressing good people. It will happen as the coming weeks will be focused on the re-count and then discovering just how corrupt the Democrats have become by selling themselves out to others who hate America.  It is amazing just how evil and ungodly the Democrats platform has become. Prayer by God’s saints make a difference.

On Sunday morning after I had done ministry the night before in St. Louis I went for a run around a college campus nearby my Marriott hotel.  The college was called Maryville University.  The Maryville Saints.  I came upon their soccer field and began to run on it because of the soft prescription grass that made it easier to run on with the shock absorption of the field.  As I ran around it the Lord brought to my attention the center of the field and the logo.  They had a huge M for Maryville that was in red with black and white edging around the M.  He told me that the United States would ultimately be shows as Red for Trump as the final results after the re-count would prove to be black and white.  That the final numbers would show that Trump won the election as Biden cheated by having people send in their mail in ballots from many people who were dead or no longer living at the addresses shown.  And that as the Saints prayed that the Lord would hear their cries for justice and that it would be served. That there will be 4 more years of Trump to help clean up all the Jezebels who were involved in the political system and church and beyond.  Jezebel will then be down on her knees for the next 4 years in America as the humbling process increases and that Restored to Freedom will play a very integral part of helping get people healed from their past soul wounds and delivered from the demons tormenting them changing their lives to peace and saving thousands of marriages from misery and divorce.

So get ready – for the next few weeks will be a battle for the heart and soul of America that will affect the world.  The liberal lying media and Democrats will do their best to move forward and steal the election for the enemy. Pray that all lies and corruption are exposed.  That those who lied and cheated will be shown and justice will be served.  God wants Trump to remain in office to clean out the swamp that is a stench in His nostrils.  I declare that it will happen.   Keep your faith on.