In order to do great things for the Lord we must endure very painful seasons which will give us experience in walking in others shoes and stretch us to prepare us for doing far greater things then we would be able to do had we avoided all pain.  So even though no one wants to get hurt, betrayed, abused, persecuted, laughed at, mocked, lied about, discarded….it allows us to relate to many more people in the world and once we have healed (through forgiving people who hurt us, humbling ourselves from pride and repenting for our own sin) we are able to truly help others to get to their healing and deliverance as well.  Without the pain and scars we would not be able to be used as impactfully for the Lord.  So the Lord will take you into seasons of pain and despair in order to have you come out the other side with an amazing testimony that could help thousands or more. 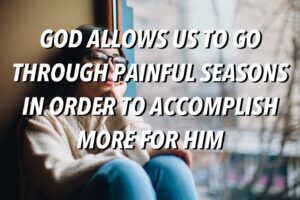 So many people in the Bible who did great things for God had to overcome extreme loneliness, betrayal, accusation, lies and pain.  Think about people like Joseph whose brothers wanted to kill him as they were jealous of his dreams, but instead was sold into a life of slavery to Egyptians.

Ultimately, Joseph was sold to Potiphar, the captain of Pharaoh’s guard. (Genesis 37:36, Genesis 39:1) Later, Joseph became Potiphar’s personal servant, and subsequently his household’s superintendent. Here, Potiphar’s wife tried to seduce Joseph, but he righteously refused to commit adultery with her. Angered by his running away from her, she made a false accusation of rape, and thus assured his imprisonment for about 3 years.  During that time Joseph could have gotten very angry with God as he did nothing wrong and still had to suffer.  But suddenly he interpreted a dream for Pharaoh and was promoted to number two in command of all of Egypt!  Then he was ultimately used to help save Egypt and his own family from a great famine.

Moses also went from living the life of luxury in the home of Pharaoh the first 40 years of his life, but then once he learned he was a Hebrew he stood up for a fellow Hebrew who was being beaten to save him and actually killed an Egyptian.  Then he fled into the wilderness for a life of hardship for the next 40 years.  During his wilderness years he was being changed into having more of the heart of God and hearing His voice as he was being prepared to lead a million Hebrews out of Egypt into their freedom and ultimately into the Promised Land although he had 40 more years of wandering in the desert with them.

I look back on my life and while the first 40 years I was clueless that I would ever do anything in ministry as my plan was to become a millionaire as I watched my father and mother struggle financially and have much strife due to it.  But then after going through a 20-year marriage of striving of my own I began to hear the Lord very clearly.  He told me that He wanted to use me in a ministry to help people around the world who had been hurt and wounded and needed delivered.  I received several prophetic words that confirmed that in January 2009 at a Morris Cerullo conference in Nashville, TN. He then led me into a marriage and told me that I would love this woman “like Christ loved the church.”  Then during the 6 years of marriage I had to suffer some extreme emotional and some physical abuse that was really hard to endure.  God told me not to tell anyone during the marriage what I was enduring and that I could only talk to Him about it.  It was extremely challenging and hard and everything in me wanted to leave but I stayed until the Lord finally told me to separate after asking me “Who are you going to serve, the demons in your wife or me?”  He said that the ministry he would have me do would ultimately affect millions around the world and bring in a huge harvest of people who were in the church but were not saved as they behaved in ungodly ways.  That the ministry would set people free from their demonic control and save lots of marriages from divorce.

Then He led me into a couple other relationships that would teach me about how real witchcraft was in the church and to learn how critical it was to get people’s soul wounds healed and then deliver them from demons.  Although these lessons were very painful the Lord’s hand upon me and the ministry was evident as it continued to grow each year.  Now we are seeing tremendous testimonies every week from people around the world whose lives are being healed from their past soul wounds and they are getting delivered from their tormenting demons able to live a life of peace, joy, love and all the fruit of the spirit.

2 My brethren, count it all joy when you fall into various trials, 3 knowing that the testing of your faith produces patience. 4 But let patience have its perfect work, that you may be perfect and complete, lacking nothing.

So when you have to endure persecution from your spouse, your family, friends, enemies, church people, co-workers and others – understand that the more pain that you endure and overcome for His sake…the more people that you will be able to help that you otherwise couldn’t.  There is purpose in the pain.  No pain…no gain.  Yes, it is critical that you get healed from your soul wounds and delivered from the demons tormenting you so that you can minister out of His love and not your pain, pride or selfishness.

So even though you may be in a season of suffering and pain, understand that God is working all things together for your good.  Trust in Him and His plan.  Count it all joy.  God will allow you to have pain in order to have greater gain for His kingdom.  You can do it.