I have done thousands of personal inner-healing and deliverance sessions for people since 2015 and am now seeing more and more people from the main stream church who are discovering that they have been dealing with a demonic issue in themselves, their spouse and children due to wounds from their childhood and are motivated to seeking out deliverance.  Like so many who grew up in the church and were taught that “demons cannot affect a Christian”, the truth is getting out that most all who would call themselves a Christians are dealing with demonic strongholds that started when they were hurt by their own father, mother or other people (emotionally, verbally, physically and sexually).

So many are searching to get fixed from their past soul wounds so they can enjoy peace in their life and those who have sought out traditional counselors, psychologists, psychiatrists, the medical community and pastors are simply not seeing the positive results they want in peace and good health.  So more and more of them are seeking out inner healing and deliverance ministers who help them see major positive changes in their lives through taking them through having them forgive those who have hurt them and repenting for their pride and sin and then commanding the demons to be gone from them.  Then they finally receive true peace in their mind and also many get healed from physical pains in their bodies.  Anger and bitterness allows demons to torment people in their bodies.  Billy Graham once said that 75% of the people in hospitals would not need to be there if they just forgave those who hurt them.  Kenneth Copeland said that 90%  of chronic sicknesses are self-induced. 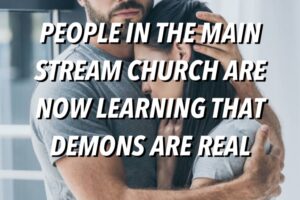 So over the past year I have seen more and more people reaching out to me for personal sessions that would have never believed in demons before.  They are desperate for a real solution to help them get off of taking medications that have many side-affects and never fix them and wanting to see all their physical pains be healed so they can enjoy their lives.  We have seen many who were depressed with thoughts from demons and hearing suicidal thoughts no longer hearing those demonic voices anymore after they forgave people who hurt them when they were growing up (and present day) and then commanded the demons that attached to their soul to go.  When they repented for their pride and sin and humbled themselves before the Lord they felt so much better and cleaner in the Lord.  They were able to stop acting out in sexual ways that were ungodly.  When both they and their spouse got healed and delivered they were able to stop striving, arguing and fighting.  They actually love each other and treat each other with respect.  They are able to apologize to their children for the pain that they inflicted on them and then their hearts turn back to their parents.

People have tried all of man’s methods to fix their demonic issues and it simply does not work.  I remember a 10-year-old girl from College Station, TX who went on a church youth trip to Colorado and was molested on the trip.  She came back a changed girl for the worse.  She was hateful to her mother and her younger brother.  The mom tried everything…taking her to her medical doctor, counselor, psychologist and no medications fixed her.  After two years of desperation the mother finally learned that I was in town so set up a meeting.  When I went to see the girl the mother told me that her school called her to make her aware that her daughter wrote a paper describing how she was going to dismember the body parts of her mother.  So when I talked to the girl I could sense the demons in her were not pleased to see me.  So the Lord told me to simply take my authority in Christ and command the demons to be gone. So I did and the demons left immediately.  The girl changed instantly.  Within a few hours after the deliverance the family decided to go to the park.  The girl was holding the hand of her mother and later wanted to see baby pictures of her younger brother (who she used to torment horribly).  The girl was back in her right mind and was sweet and loving again.  The family was so happy to have all the strife and fighting gone.

People are looking for a change that is significant and real and they cannot resolve spiritual issues where demons have legal rights to torment them with medications. You cannot medicate out a demon.  Most all “mental disorders” are demonic at the spiritual root. People have these disorders due to growing up with people who hurt them (some emotionally, some verbally, some physically or sexually…and some through demonic dedications or witchcraft). So more and more people are learning that inner healing and deliverance can truly set the captives free in Jesus name and cause people’s negative personalities and evil behavior to change suddenly.  Much of deliverance for adults is a process of removing layers and levels as the person is able to be honest and forgive and repent.  As more and more people manifest in demonic ways – it is becoming more and more evident for the need of inner healing and deliverance.