WHO WILL YOU SUBMIT TO : GOD OR THE DEMONS IN YOUR UNGODLY SPOUSE?

About half of the world struggles with a more controlling, selfish, prideful and sexually selfish and impure,  ungodly behavior while the other half of the world get hurt by them.  Sadly, they find each other in the majority of all marriages.  Jezebel married Ahab and look what happened to them.  Ahab was King of Israel and reigned for 22 years, but Jezebel wore the pants in the family and killed God’s prophets and forced people to worship Baal and intimidated anyone who stood in her way (murdering Naboth for his vineyard to give to Ahab).  The Bible says: 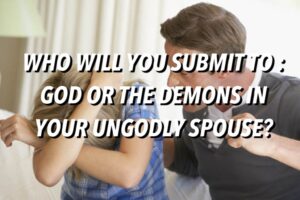 Men also have the spirit of Jezebel and abuse their wives and many become sick to the point of death (and I know of some who stayed too long in their marriage and died due to the ongoing emotional abuse from their spouse).

So what is a person to do when they have a spouse that abuses them, over and over again, sometimes for years and years and never intends to stop and always blames everything on their victimized spouse?  Are they to stay until they die and do nothing for the Lord?

After six years of abuse the Lord asked me “Who are you going to serve, the demons in your wife or me”?  I had to make a choice because He said if you continue to tolerate the demons in your wife you will never do anything for me because her demons will stop you.  It was so true.  I knew I had to make a decision. I gave her time to repent for her extreme abuse and then when I finally learned it was demons that tormented her I tried everything to help her get help but she refused.  I gave her much time to admit the truth but she would only blame me and others in her past and lie and never humble herself to be honest and choose to get her soul wounds healed and delivered.  So once I separated then her lies against me became worse and eventually she filed for her fourth divorce.  But then I began to start doing what God called me to do and help others become aware that Christians do hear demons and the only way to get them help was to get their soul wounds healed and deliver them from their demons so they could actually behave like a real Christian with real fruit of the Spirit.  Everyone has a freewill and can choose to be honest or live a lie and hurt people.  So now Restored to Freedom, the ministry the Lord had me start in 2015, has seen tens of thousands of people delivered around the world and many marriages healed and saved.  The fruit is very good.

We have to choose in our lives to serve God no matter what.  We cannot serve the demons in anyone.  We cannot put anyone in front of our relationship with God.  Demons in our spouse (mom or dad or anyone else) cannot take precedent over what God wants us to do.  We give people time to repent or change but if they refuse to then we may need to separate or depart from them and give them to God in order to do what God wants us to do for Him.  We cannot make anyone an idol before the Lord.

God hates divorce but He also hates abuse and people who try to stop you from doing what God has called you to do.

16 There are six things the Lord hates— no, seven things he detests: 17 haughty eyes, a lying tongue, hands that kill the innocent, 18 a heart that plots evil, feet that race to do wrong, 19 a false witness who pours out lies, a person who sows discord in a family.

There are many people who attend church who have evil fruit of the flesh, behave ungodly, abuse their spouse and children yet call themselves Christians.  They are not godly in any way. They are like modern-day Pharisees and scribes.  They are white-washed tombs and vipers in the eyes of Jesus.  God is looking for good fruit as proof of being a real Christian.

The Tree and Its Fruit

15 “Beware of false prophets who come disguised as harmless sheep but are really vicious wolves. 16 You can identify them by their fruit, that is, by the way they act. Can you pick grapes from thornbushes, or figs from thistles? 17 A good tree produces good fruit, and a bad tree produces bad fruit. 18 A good tree can’t produce bad fruit, and a bad tree can’t produce good fruit. 19 So every tree that does not produce good fruit is chopped down and thrown into the fire. 20 Yes, just as you can identify a tree by its fruit, so you can identify people by their actions.

Many people who call themselves a Christian have no good fruit at all and are simply being used by their demons to stop others who are called to do what the Lord wants them to do.  Their assignment in life is to stop their victims from their assignment in Christ. So many victims who are married to them just submit to the demons in their abusive spouse and feel like dying as they are yelled at and controlled or manipulated over and over again if they don’t do what the Jezebel spouse demands.   We have to get to the realization that if a spouse is being used by their demons to stop us from doing what God has called us to do then we may have to separate or depart and choose to do what God has called us to do.  It is never an easy choice as many in the church who hear demons will persecute us for choosing freedom in Christ and not submitting to the demons in our spouse.  But anyone who has ever been emotionally abused (or worse) over and over again, thousands of times, know that the demons in our abuser want us to submit to them out of fear.  Their demons want to destroy our self-confidence and cause us to hear their demonic words in our thoughts for the rest of our lives.

It feels impossible to stand up to a person who has abused you for a long time and speak the truth to them because we are programmed by their demons to give them what they want and submit to their every demand or else they will really let us have it.  But enough is enough.  If you have given them time to change, humble themselves, repent (often send them video testimonials or teachings from my YouTube channel at youtube.com/c/nelsonschuman) and yet they are still prideful, mean and evil, then the Lord will confirm when it is time to stop submitting to their demons and separate and possibly depart.  Remember – they are not a true believer in Christ if they have no fruit of the spirit.  Galatians 5:16-26.  We need to obey and submit to God and godly people.  People with demons just want to abuse us, steal our time, our health and our lives.  Obey Jesus and live your life for Him.