GOD IS MOVING HIS REMNANT WARRIORS INTO THEIR PROPER PLACES & POSITIONS

2020 and 2021 have been very busy years for God’s remnant warriors as they have felt much shifting, changes, uncomfortableness and movement while stretching their faith to new levels never seen before. Several have already moved to new cities, counties, states and locations that they never expected – while many more are now being prompted by the Lord to move to new locations where other remnant warriors are already positioned in order to help them to accomplish their assignments in Him. Many are also leaving their secular jobs and careers and moving into their ministry assignments and callings as the experiences of suffering that they endured over their lifetimes are now opening up doors to be able to help people who have been hurt deeply to be healed and delivered.

Many “suddenlies” are happening where people who have the heart of the Lord and have gone through great soul wound healing, cleansing, humbling and deliverance can now be trusted by the Lord to go forth and help those in the church who are hurting. They are suddenly being re-positioned like Joseph away from their toxic family members and places of work into new places to live, and new positions of authority with greater blessing and favor. While many of those currently in leadership positions in the church are now being humbled out of their current positions which were allowing them to operate in a state of pridefulness and unrighteousness, far from the Lord’s heart. 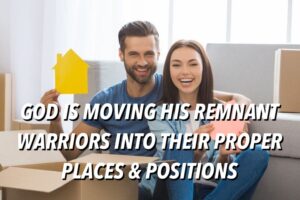 There are also some who are being moved away from their church or other ministries because Jezebel had been tolerated and firmly entrenched in them as they poisoned the water for God’s people to operate by lying and gossiping about them. God’s people are now moving into new positions and cities and states where they will be utilized in far greater capacities. The Lord has given much time to those operating in the Jezebel spirit to repent but they have refused and is now working to expose them for their own good, as well as those who have tolerated those operating in the Jezebel spirit. So, expect there to be much unrest, confusion, anger, accusation and significant manifestations to occur while this purification process occurs.

Many of God’s remnant warriors have endured strong opposition from people who are being used by Satan, including those in the church and their family members who are not delivered from their demons (although most people who attend church would call themselves “Christians” but unfortunately most have much more fruit of the flesh than real fruit of the Spirit as explained in Galations 5:16-26). Therefore, God’s true righteous warriors have been limited from accomplishing much of their callings and assignments in the Lord as they have tried to appease their family members (spouse, parent, siblings) whose assignments are to stop them. Jesus said that He came for division in Matthew 10:34-39 because if a son chooses to align his life with Christ but his father refuses to repent and operates in much fruit of the flesh and serves his demons – then they cannot co-exist without strife, arguments, which limits what God and the Holy Spirit can do in their lives.

In Genesis 12:1-3, the Lord said to Abraham, “Go from your country and your kindred and your father’s house to the land that I will show you. And I will make of you a great nation, and I will bless you and make your name great, so that you will be a blessing. I will bless those who bless you, and him who dishonors you I will curse, and in you all the families of the earth shall be blessed.” This blessing included land that, at the time the promise was made to him by the Lord, belonged to other people who were living in sin (Canaanites).  Abraham got into fear on the journey to his promised land by lying about his wife and telling people she was his sister (he was half right).  Then once they arrived at their promised land Sarah doubted she could get pregnant at 90 years old.  So many of you have doubts about moving and God is telling you that once He has told you to move to expect the enemy to come and give you doubt.  For many this blog is confirmation that you are to obey Him and move.  Many will not be able to see their blessings and favor until after you start packing up and when you arrive at your promised land.  For some who are resisting God’s desire for you to move or change jobs or positions – He is making your circumstances unbearable past the point of you choosing to resist where you will have no other choice but to submit to him (remember Jonah and the whale?).

God is in the process of relocating His people from their existing apartments and homes into new apartments and  homes (some are upgrading to larger facilities while others are down sizing and fixing up older homes) that are improved with more land and also into blessed working / ministry positions. Some are receiving new financial resources that will be used to bless those in full time ministry positions to accomplish greater things for God. Some are moving into new ministry positions to help many more than they could by staying in their current location. If you are currently being oppressed by people in your life (family, boss, etc.) or your local or state government then God will help you to separate in order to accomplish what He wants in your life as long as your life is aligned with His.

There are many who God is moving now to live in different states in the United States where other like-minded righteous people are, especially those who are operating in ministry friendly states governed by godly governors. Florida and Texas are two such states that are seeing a tremendous amount of movement into them (although the enemy is also trying to move his people to them to counter what God is doing) while New York and California are seeing many who are transitioning out of their states due to the oppression.

2022 will be a year when God will be using His people who have aligned their lives closely with His in a greater capacity than ever before. Many are coming into their lifetime callings in a full-time way. All the tears, struggles, exhaustion, pain, attacks, and lost nights of sleep will converge into an understanding of why you went through what you did so that you can accomplish what God wants. You will finally have no doubts that all that you suffered is now being used by the Lord. God uses all things together for His good.

Some people are shocked to see new relationships with people coming along side of them at their new locations and positions and business pursuits as they see their pure hearts, motives and intentions to simply help them accomplish what the Lord wants for them. Favor and blessings are all around them. People are sowing into their ministries and causes because they can sense that God is all over those who are in charge of them. God is also waking up people to stop sowing into ministries and churches where sin is tolerated and operating. A re-allocation of money and wealth is occurring.

God is restoring places of devastation to new life

God is using people in many places where devastation was what the city or town was known for but now it is being used for good and great things with much blessings. Think about Waco, Texas, where in 1993 the Branch Davidians lead by David Koresh, ended a siege in tragedy with 79 people dead. Now Chip and Joanna Gaines, of the Fixer Upper TV show (they renovate broken down older homes to beautiful and increased valued homes), has seen thousands flock weekly to Waco to visit their Magnolia furniture store, bakery, coffee shop and farm to table restaurant as the couple’s faith in Jesus is clearly evident and clearly blessed. I recently did ministry in Waco this past weekend and could see the blessings all around. Baylor University, a Christian college in Waco, recently won the national championship in basketball in April 2021 and has a top-rated football team.

Moving from an existing place which you know to a new place that you have never lived before takes faith to trust in God to make the move. Many of you have visited the place that the Lord wants you to move to but need to take the step of faith to actually say goodbye to the old and hello to the new. God will give you signs (some literal signs on the road, social media, texts, phone calls, messages, etc.) and some visions, dreams and confirmations from other people that have no clue that you are considering a move. So be ready to be stretched! God loved Abraham’s faith.