ARE YOU A SCAPEGOAT?

What exactly is a scapegoat? Wikipedia lists two definitions with the first being a person who is blamed for the wrongdoings, mistakes, or faults of others, especially for reasons of expediency.  The second talks about the Bible definition which is when a goat is sent into the wilderness after the Jewish chief priest had symbolically laid the sins of the people upon it.

6 “Aaron shall offer the bull as a sin offering, which is for himself, and make atonement for himself and for his house. 7 He shall take the two goats and present them before the Lord at the door of the tabernacle of meeting. 8 Then Aaron shall cast lots for the two goats: one lot for the Lord and the other lot for the scapegoat. 9 And Aaron shall bring the goat on which the Lord’s lot fell, and offer it as a sin offering. 10 But the goat on which the lot fell to be the scapegoat shall be presented alive before the Lord, to make atonement upon it, and to let it go as the scapegoat into the wilderness.

Today there are many people in the world who have been unknowingly selected to be the scapegoat in their family and in their other relationships in life such as work, marriages, ministerial relationships, church, etc.

In a family situation the scapegoat carries the sins of their own family (which typically have many members in the family who are unhealthy, toxic and/or dysfunctional). For instance, Dad is an alcoholic, sex addict, aggressor, prideful while Mom is his enabler. Or Mom is angry, controlling, belittling, prideful, demanding and Dad is her enabler. The family is expected to  deny the truth of their parent’s dysfunction and hide it from the public (keep their dirty laundry buried in the backyard). So what the toxic family members will do is to label one of their children the “problem child” and blame everything that is wrong with their family on the child. This scapegoated child can do no right.  The scapegoated child is typically compliant and selfless and has more of a mercy heart who will do anything to try to help their toxic family members’ demands to be served in order to gain acceptance or love. 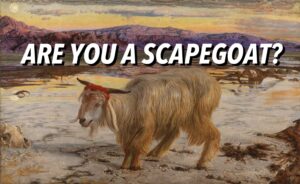 The parent who is most demanding will usually make another child the “golden child” or the hero of the family who can do no wrong. Since children will sacrifice themselves for their parents both children will mold themselves to meet the toxic parents’ needs. The child that is the scapegoat will work tirelessly to try to earn the love of their demanding parent but never achieve anything but blame and shame. The scapegoat will often struggle to make sense of their overly harsh and unfair treatment and then just agree to become the suggested role of the “troublemaker” which leads to a struggle with a lifestyle that could lead to smoking, drinking, partying, sex and drugs or other problems. Then the toxic demanding parent will hold up the golden child to show what wonderful parents they are and that the family is a good, well- functioning family unit when it is anything but. They point at the scapegoat as being the source of any trouble in the family to distract outsiders from the fact that one of the parents or both are the problem (often times both parents are the problem because they both need healed from their soul wounds and delivered from their demons).

So just who is the most likely to be the scapegoat in the family?

People in everyday life (work, church, ministry, school, etc.,) who have good hearts, compassion, love, and want to stand up for the truth, good values, righteousness, and Jesus Christ will be scapegoated in order to blamed for everything that will go wrong with toxic people.  You see it especially in today’s world as evil is being called good and good is being called evil.  You see it in many marriages where the more demanding, mean, prideful and sexually impure spouse scapegoats their loving and kind spouse who is blamed for all their evil. If you choose to be aligned with Jesus and good then you will never be able to “get along” with those who are aligned with Satan and evil.  Those who are evil will call declare that you are the problem, that you cannot get along with anyone, that you are a “troublemaker” because you won’t just keep your mouth shut and give into their their evil demands.

So understand that the ultimate scapegoat was Jesus Christ.  He took all of our sins upon Him.  He died on the cross and one of his last words that he stated was “Father forgive them they know not what they do.”  Do not allow yourself to be brainwashed into thinking you are the bad one in your family or church or the workforce when you are bold and stand up for the truth and righteousness and call them out for the lies, evil and sin that they are in.  Yes you will be persecuted because Jesus was also persecuted as well as His disciples and everyone else who did what God called them to do.  Do not bow down to the demons in other people.  Do what God tells you to do and He will be proud of you and you will receive a great reward from the Lord.