UNDERSTANDING THE SPIRITUAL ROOTS OF HOMOSEXUALITY

I have taken thousands of people in the church through inner healing and deliverance since 2015 in my ministry.  All have been hurt and wounded growing up.  Some by one parent or both, some by their step parent, relatives, neighbors or strangers.  Everyone has been hurt by someone.  Most through verbal or emotional wounds or abuse, some through physical abuse and many through sexual abuse, being violated, shown pornography, touched or viewing someone sexually.  When people get their soul (mind, will and emotions) wounded then demons are able to gain legal rights to speak into their memories, their minds – into their thoughts.  The demons will cause them to think things that are not true and entice them with visions.  They will cause them to become angry, jealous, proud, sexually impure, and to do things that are not aligned with the Bible.  There are many who attend church and are leaders in the church who behave much more in the flesh than in the spirit and hurt people instead of help them.  There is a saying that “hurting people hurt people.” What does the Bible say about people who live more in the flesh than the spirit?

There are many who don’t have much fruit of the Spirit and struggle with a lot of fruit of the flesh.  The Bible says people who practice a life of the flesh “will not inherit the kingdom of God.” 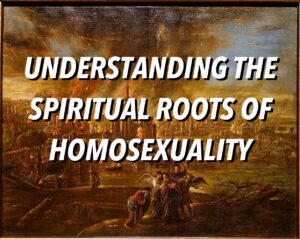 Since 2015 I have ministered to many people who have struggled with living a homosexual lifestyle and were tormented with no peace in their lives.  Like I do with every person who comes to me to seek getting healed from their past soul wounds and demons that tormented them I asked them what happened to them when they were growing up.  How did their father or mother treat them (any harsh words or judgmentalism, religiousness, verbal or emotional abuse), their step parents, relatives and any sexual violations, exposure to pornography, being touched or sexually exposed?  In every case they had either been touched when they were a child growing up by a person from the same sex (same sex parent, grandparent, relative, or stranger) or they were accused of being gay when they were a teenager by someone in school or a teacher or others when they actually never had any gay sexual activity.  But when they were told over and over again week after week they finally got worn down as they heard voices in their head telling them that they were gay and then they took action upon the suggestions.  Or later in life someone engaged with them from the same sex in a sexual act which caused them to struggle with their identity.

So to get them healed from their sexual wounds I always take them back to their first remembrance of a sexual violation (it could be porn or someone touching them or exposing them to nudity).  Many can remember it like it was yesterday.  Many were 4-10 years old and someone touched them or exposed them to something sexual that they should not have been exposed to.  I ask them what they felt when they were violated and they often state that they felt embarrassed, ashamed, guilty, or dirty as they knew what was being done to them was not supposed to be done.  Often the person who molested them told them not to tell anyone or they would be hurt.  That is because what was done to them should not have happened but it did.  Then the demons had legal rights to enter them to start tormenting their minds and causing them to be drawn back to engage in additional improper sexual acts.  Often times the demons then gets the person who was molested to touch another boy or girl and pass on the same demonic spirits to another child.  Then that child struggles with lust and desires to have a sexual act with other people.  And on and on it goes.  Sometimes it just takes someone to accuse another child or teen that they are gay to get them to start believing it.  Over and over and over again in their mind they hear the demons trying to convince them that they are gay. Then once they pursue to take action with another person from the same sex the demons gain even more strength.

Some people who struggle with homosexuality come to church but unfortunately the church has no idea how to effectively and lovingly minister to them because many in leadership need their own soul wound healing and deliverance.  Some leaders in the church state that God made them that way and so we should just allow them to continue to live their lifestyle but unfortunately they continue to struggle to have any peace.  Some in the church state that God hates them and they should just kick them out of the church.  Therefore they don’t fit in. The truth is that the church is in such disrepair that most who struggle with homosexuality unfortunately cannot be helped much if at all by the church because they do not know how to.

The truth is God loves them the same as He loves those who struggle with sexual sin with those of the opposite sex, porn, adultery, etc.  But sin is still sin so they will never be able to live in the peace and joy that God wants for them.  They will never be able to live a lifestyle congruent with the Bible and the fruit of the spirit (love, joy, peace, patience, kindness, goodness, gentleness, faithfulness and self-control).  God’s ways are always the best for all of us.  We cannot change the Bible to suit our own personal desires, whether you are in sexual sin with those of the opposite sex or the same sex.  If we choose to sin we will have consequences that cannot be removed without repentance.  Getting the wounds from our soul healed and delivered from demons is the only way to truly enjoy our lives the way God intended.

When I help a person get their sexual wounds healed when they were younger I always ask Jesus to come and speak to them about the specific situation.  Jesus always tells them that He loves them and is sorry for what happened to them. That they were an innocent little boy or girl who lost their innocence when they were violated.  Then to get healed the people give Jesus their wounds from that trauma and choose to forgive those who hurt them and then Jesus heals them and then they can command the demons that used to be attached to their soul from that wound to be gone to the pit.  Then they feel clean and pure sexually and no longer struggle with the thoughts or temptations from the demons.  They often cry because now they feel clean for the first time that they can remember.  Sometimes the person says that they had always felt like they were gay when growing up but the Lord allows them to understand how they were molested before they even could remember.  The same thing happens for those who always struggled with sexual sin with people from the opposite sex – they were either shown porn or touched sexually (usually by age 18) and then always struggled because they were never healed and cleansed by Jesus and the demons had legal rights to torment them.

Genesis 19 makes it clear how God views homosexuality as He destroyed Sodom and Gomorrah for the prevalence of homosexuality.

9 Do you not know that the unrighteous will not inherit the kingdom of God? Do not be deceived.  Neither fornicators, nor idolaters, nor adulterers, nor homosexuals, nor sodomites, 10 nor thieves, nor covetous, nor drunkards, nor revilers, nor extortioners will inherit the kingdom of God. 11 And such were some of you.  But you were washed, but you were sanctified, but you were justified in the name of the Lord Jesus and by the Spirit of our God.

The demons know that sex is a powerful gift from God that when perverted causes a person to struggle for a lifetime which causes the person to never have the true intimacy that God wants with us – with a personal relationship.  About half of all pastors struggle with looking at pornography and have no true sexual intimacy or love with their wives.  God loves us all and wants no one to perish but gives us all a freewill to choose a life of righteousness and intimacy with Him or to choose a lifestyle of unrighteousness far from Him.  He is the one who declared that sex is reserved to only be done between a married man and woman and anyone who goes outside of His plan will not be able to be approved, blessed, protected and receive all that God wants for us.  There is always forgiveness waiting for us when we humble ourselves before Him and take responsibility for our sin and then desire to get our soul wounds healed and deliverance from the demons tormenting our thoughts.