WHAT ARE SOME OF THE WAYS THE ENEMY CAUSES US TO TOLERATE SIN?

There are many ways that Christians tolerate sin in their lives.  Most struggle due to being hurt growing up – a parent, step-parent, other relative, sibling, neighbors, kids at school, teachers, church people, etc.   When we are hurt emotionally, verbally, physically or sexually we will hear demonic voices in our heads telling us not to trust anyone, having thoughts of anger or bitterness for those who hurt us, wanting to get back at people, being sad for all the injustices. Thus forgiveness is imperative in order to take away the legal rights of the demons so you can command them to go from you so you can have more peaceful thoughts and fruit of the spirit.

Have you ever thought through some of the ways that Satan causes you to tolerate sin? 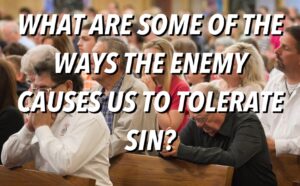 #1 – Bullying. If you have a relationship with someone who historically gets angry or will go on and on arguing with you if you don’t give them what they want (and their desires are for things that are not what the Lord would want you to allow them to do or get) then you will usually give in to them and let them have what they want.  Why?  So that you can minimize the length of the argument or tirade that they will go into.  Thus if your spouse demands that you watch a movie that is R-rated with curse language, graphic violence and sexual content then you often just agree to watch in order to save a drawn-out fight.  You tolerate a sinful movie due to them. Your spouse may also demand their way of listening to music that talks about having sex or with curse words in it which grieves the Holy Spirit but if you talk to them about not listening to it they will again go off on a tirade. Perhaps God wants you to do some ministry and help a family that is in need but your spouse goes off into an argument against it and to save wasting 30 minutes of your life you just agree with them and do not do what God wants.

#2 – Money. When people give you money (either on the job, a friend, a spouse, etc.) you will usually tolerate them if they choose to do something corrupt or evil and keep your mouth shut because you know that they may cut off your money supply or hold it over you.  Many work at companies who they know are doing corrupt business practices or hurting people all for the sake of the dollar instead of trusting God to provide and standing up for righteousness.  Many who are abusive who attend church give tithes and then the pastor looks the other way or supports them if they abuse their spouse emotionally or worse because of the money.

#3 – Fear. All it takes is a threat from someone who will lie about you if you expose the truth about their evil or sin in their lives.  Jezebel threatened to kill Elijah when he killed her Baal Prophets at Mt. Carmel so he ran for his life.  So many people look the other way when they need to go to someone and report the evil that others are doing.  They are more afraid of others’ threats then obeying God.  Many pastors are more afraid of those who operate in Jezebel in their churches or afraid of the government and submitting to their threats instead of standing up for God.

In 1 and 2 Kings Ahab married Jezebel and then tolerated all the sin she wanted to do.  She did many evil things.  She introduced Baal worship and tried forcing everyone to worship Baal.  She killed God’s true prophets.  She introduced prostitution and sexual perversion.

The reason Ahab tolerated her evil was that he received benefits.  Jezebel would get him things that he wanted.  One of the things he wanted was Naboth’s vineyard so he could turn it into a vegetable garden.

So take time to think how you give in and tolerate sin in your life and take a stand against it.  Forgiving those who have hurt you and humbling yourself from your pride goes a long way.  Command the demons to be gone from you so that you can hear from the Lord.  Pursue things of the Lord and pursue His gifts including praying in tongues, reading your Bible, fasting, and pulling away from the things of the world.  My latest book Freedom From Soul Wounds and Demons will help you get healed from your past and live a godly life.

2 Replies to “WHAT ARE SOME OF THE WAYS THE ENEMY CAUSES US TO TOLERATE SIN?”