People who have been emotionally, physically or sexually hurt by other people (a parent, step-parent, foster parent, adopted parent, other relatives, neighbors, strangers) will often develop anger, bitterness, pride, jealousy, sexual impurity and not trust anyone – including God.  Many of them attend church on a regular basis and although they asked Jesus to come into their heart, their soul was still wounded and if they have not been able to truly forgive all those who have hurt them from their heart then demons will have legal rights to give them thoughts.

Many church-attending Christians have given demons legal rights to torment their soul (mind, will and emotions) due to their unforgiveness for those who hurt them when they were growing up. Jezebel manifests in them as they hear hundreds and thousands of thoughts each day from the demons telling them that they can’t trust their spouse or others so they better tell them what to do. Those hearing all these thoughts would never discern that the thoughts are coming from demons. They are constantly critical of their victims (spouse, kids, others who don’t do what they want), wanting to control and manipulate them to make them do everything that they feel is best which is actually not the best.

The Jezebel spirit affects many in the church (Satan targets Christians with demons in order to cause them to be ineffective in their Christian walk) and is the main reason for arguments and divorce as one of the spouses struggle with the Jezebel spirit and the other with the Ahab spirit.  1 and 2 Kings talk all about Jezebel and Ahab.  Jezebel controlled people who stood in her way but also was able to get Naboth’s vineyard for Ahab by lying about Naboth and accusing him of cursing God and coming against King Ahab – so they killed him and gave the vineyard to Ahab.  Jezebel causes people to tolerate their evil behavior often times out of fear.  After Elijah called fire down to burn up his offering and then kill Jezebel’s Baal prophets, Jezebel threatened to kill him so he ran for his life out of fear.  The spirit of Jezebel affects both women and men. 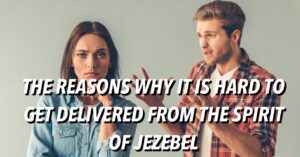 Pride (which is the Leviathan spirit in Job 41) always affects people who have been hurt emotionally, physically or sexually.  Leviathan always teams up with Jezebel. Pride tells a person in their thoughts – “you have been hurt before and you better not trust anyone else because they will hurt you too”.  Therefore pride will cause you to think your decisions are always right and anyone else who does not agree with you is always wrong.  Pride also causes you to trust yourself to make all the decisions and to not trust God.

34 He (Leviathan) beholds every high (prideful) thing; He is king over all the children of pride.”

So pride is one of the biggest reasons why people cannot get delivered from the spirit of Jezebel.  Pride causes people with the Jezebel spirit to not be able to admit to the evil things they have said and done. They cannot even see or remember all they did to be critical and judgmental and controlling to their victim. They blame their victim and recruit others to come against them. They focus on others and not in the mirror at the things that they have done. They justify their sin and blame it on their victim spouse.

People with the Jezebel spirit will lie convincingly about how they have hurt and abused their spouse, children or other victims. They will talk to as many other people to support them and their lies which makes it very hard to fess up and tell them that they lied later if they ever did want to stay married.

People with the spirit of Jezebel will always portray themselves as a victim to gain sympathy from others and then blame their controlled or abused victim / empath for things they did that was caused by the Jezebel and their provocation to their victim.

People with the Jezebel spirit (also named by the Psychological community as a Narcissist) listen to every thought that comes to their mind (of which many thoughts are coming from demons) and agrees with it and would never think the thoughts they hear could come from demons.

People with the spirit of Jezebel often think those who they have hurt (victims) have the Jezebel spirit when in reality they actually have it.  The demons convince them that they are sweet and innocent and their empath (Ahab spirit) is the one who is bad. So people with the Jezebel spirit have a false sense of reality. What they believe to be true concerning circumstances and what was done to them by their spouse or others is not the actual truth. The demons will convince them that all they did was good so they cannot see the truth of what they did to abuse their spouse.

People with the spirit of Jezebel who are physically attractive have a much harder time to get delivered because they get attention from others due to their looks which feeds their pride and causes Jezebel and Leviathan to be very strong due to the legal rights of the demons to stay and give them thoughts.

The spirit of Jezebel causes their victims to be very competitive and want to beat their victims at everything. It causes them to think they are smarter than their spouse. That’s why it’s extremely hard for them to own their control and abuse and then ask for forgiveness. They hear demons that lie to them to get them to believe their spouse is evil and is out to get them.

People with Jezebel have an extreme jealousy due to the person’s extreme insecurity in themselves and hearing demons tell them lies about their victims (saying their spouse is trying to flirt with others when they are not).

Jezebel will cause their victim spouse / empath to get so sad, depressed and hopeless that they can turn to counterfeit comforts such as alcohol, food or drugs to check out from the constant negative words from their Jezebel spouse.

The spirit of Jezebel often creates a lot of arguments between them and their spouse which causes the victim to want to talk to a counselor or pastor.  So Jezebel will look for a pastor or counselor who is easy to get on their side to feel sorry for them as they play the victim to get them to feel sorry for them and agree with them to come against their victim spouse. They have lots of sidebar conversations or communication with their counselor or pastor to get them on their side by sharing false information to make them appear to be good and their victim spouse as bad.

So the reasons why people with the Jezebel spirit have such a hard time getting delivered is because of their pride, their lies, their victim mentality, their unforgiveness for all who have hurt them when growing up, sexual violations done to them when young, their anger and bitterness and being unrepentive.  All these give demons’ legal rights to give them thousands of thoughts a day.

So how does a person get set free from the Jezebel spirit?

To get delivered they must be honest with their own negative behavior and not allow Leviathan to blind them from the truth.  Admitting the truth is what sets a person free.

They also must be able to truly forgive all who hurt them as a child from their hearts. Ask Jesus to speak to you about everyone and you will see they were also hurt so you can forgive and take authority and command the demons to go.

They must also ask God to humble all the pride out of them and then command Leviathan out of them. Leviathan usually wraps around a person’s spine and neck causing them headaches and back aches and not allowing them to sleep well through the night or stay awake when reading the Bible or Christian books or listening to godly teaching.

They must also repent for their own sin and then command all the demons to go.

Getting healed and delivered is what allows a person to walk in the fruit of the spirit instead of the flesh (Galatians 5:16-26) and also to walk in humility, sexual purity, righteousness and to enjoy your life and marriage.