The typical marriage was brought together when boy meets girl and they were physically attracted to each other. Then typically one of them was more serious about God and obeying the Bible so they asked their prospective spouse if they were a Christian and that person says “Yes, I am a Christian and love God too.” But then after marriage happens the other person doesn’t display any fruit of the spirit (love, joy, peace, patience, kindness, goodness, faithfulness, gentleness or self control). They rarely if ever read their Bible. They are actually controlling, talk down to their spouse, comes against them, makes fun of them, blames them, walks in pride, lusting after others. They often will attend church but they put on a fake mask acting like they are godly to their audience but then once they leave the church returning to their selfish and ungodly self in the drive back home. Some of them try to get involved in church but it’s only with the intention of bringing attention to themselves and making them look good to the pastor. Then they go back home and treat their spouse badly, disrespecting them, and causing strife, arguing about everything.

So in reality, sadly, many marriages were not arranged by the Lord. They actually were setup because there was a physical attraction and the more godly person ignored all the red flags that God was trying to show them prior to tying the knot to show them they were about to marry someone who would disdain them and stop them from accomplishing what God’s assignment in their life. They were about to marry a fake Christian who only had fruit of the flesh and no fruit of the spirit. They were marrying a person who was listening to demons whose goal was to attack their godly spouse through emotional abuse or worse to try to brainwash them into believing they needed to obey their every demand and compromise their godly life. They even would use scriptures against them to accomplish their goals that they needed to “submit to them” if they were a man.

Then the more godly spouse would have to compromise their godly lifestyle to accommodate their spouse’s preferences in order to “keep the peace” or to “submit” to the demons in their spouse. The godly spouse would then be praying, fasting and doing everything to try to change the freewill in their ungodly unbeliever. They felt trapped and lied to which they actually were.

“Don’t team up with those who are unbelievers. How can righteousness be a partner with wickedness? How can light live with darkness? What harmony can there be between Christ and the devil? How can a believer be a partner with an unbeliever? And what union can there be between God’s temple and idols? For we are the temple of the living God. As God said: “I will live in them and walk among them. I will be their God, and they will be my people. Therefore, come out from among unbelievers, and separate yourselves from them, says the Lord. Don’t touch their filthy things, and I will welcome you. And I will be your Father, and you will be my sons and daughters, says the Lord Almighty.”” ‭‭2 Corinthians‬ ‭6:14-18‬ ‭NLT‬‬ 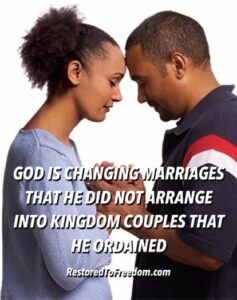 So a true believer will have the same fruit as Jesus. They will be for you, love you, love God, obey God and the Bible, treat their spouse like Christ loved the church. Just because a person attends church, prays in tongues and does miracles does not mean they are a real Christian behind closed doors. They must actually treat you with love, respect and be kind and gentle and have peace, and not live a sinful, ungodly selfish lifestyle behind closed doors. God knows who we are behind closed doors.

So understand that God wants everyone to choose Him and actually change into a real Christian but it is a freewill thing. He wants to take marriages that He did not arrange or ordain into marriages where both people have been healed of their soul wounds and delivered from their demons so they can both treat each other like they should. He wants both people to behave godly with fruit of the spirit as evidence of the change in them. He gives all of us a choice to do the right thing and be a real Christian through soul wound healing and deliverance from demons.

So He wants to get the ungodly spouse to change and become a real Christian with the evidence of the fruit of the spirit. And a percentage of the ungodly spouses are repenting and becoming a real Christian which is a great victory for the Lord. But there also are those who refuse to be honest with their ungodly behavior and refuse to forgive those who hurt them and to repent for their pride and sin and never change and will keep their demons that will take them to hell. Their assignment is to stop their godly spouse from God’s assignment and to try to stay married to them until their spouse gives up on their assignment of the Lord and to die with no fruit. They are not a true believer and God knows they never were. So the marriage was arranged under false pretense where the true believer thought they were marrying a godly spouse when they actually were not. So after the believer has endured tremendous hardship, strife, and exhausting arguments over and over and over giving their unbelieving spouse sometimes years and years to change – the Lord finally asks the believing spouse the question “Who are you going to submit to…the demons in your spouse or Me?” In many cases the abusive spouse will refuse to leave the marriage so the abused spouse may have to make the decision to part. The unbelieving spouse had already left the marriage in a very real practical reality for years but may will paint their abused spouse as the evil one to as many who will listen to them. They will act like they were the victim when in reality they were the abuser.

“(But if the husband or wife who isn’t a believer insists on leaving, let them go. In such cases the believing husband or wife is no longer bound to the other, for God has called you to live in peace.)” ‭‭1 Corinthians‬ ‭7:15‬ ‭NLT‬‬

The Lord wants everyone to be equally yolked in marriage and to be on the same team and doing what God wants. It is truly a wonderful thing. He knows those who will not change and will stay living for Satan’s kingdom. He knows those church leaders who will beat them over the head with “God hates divorce” to keep them under Satan’s control so the unbelieving spouse can continue to control and come against them and stop them from God’s plan. God also hates emotional abuse or worse where the unbeliever is purposefully trying to stop their believing spouse from doing their assignment from God. Most all of the unbelieving spouses have broken the marriage covenant due to looking at porn or having sexual relations outside of the marriage covenant yet trying to keep it a secret. So God gives them time to repent and when they refuse to get delivered He will release the believer from the marriage to stop the emotional abuse (or physical or sexual abuse) so the believing spouse can serve the Lord.

The Greek word translated “marital unfaithfulness” is a word which can mean any form of sexual immorality. It can mean fornication, prostitution, adultery, pornography, etc. Jesus is saying that divorce is permissible if sexual immorality is committed. Sexual relations are an integral part of the marital bond: “the two will become one flesh” (Genesis 2:24; Matthew 19:5; Ephesians 5:31). Therefore, any breaking of that bond by sexual relations outside of marriage would be a permissible reason for divorce.

The definition of unfaithful is a) not adhering to vows, allegiance, or duty : disloyal, an unfaithful friend. So those who treat their spouse in a harsh, mean, controlling way are not adhering to their vows to love and cherish and protect them anymore. They have departed and become their enemy.

Jesus also has remarriage in mind in this passage. The phrase “and marries another” (Matthew 19:9) indicates that divorce and remarriage are allowed in an instance of the exception clause. It is important to note that only the innocent party is allowed to remarry. Although not stated in the text, it would seem the allowance for remarriage after divorce is God’s mercy for the one who was sinned against, not for the one who committed the sexual immorality or violated the marriage vows.

So when the unbelieving spouse has been given time to repent and decided they will not pursue deliverance (or if they do they are never humbled or admit to their issues and do not get delivered from their demons) and then there is separation the unbelieving spouse will usually do a smear campaign acting like they were a pure innocent victim and coming up with a false narrative to gain sympathy from their friends and church members. But eventually over time the truth will come out as the lives of each will show who was of God and who was not by their fruit.

Then the believing spouse will be healed from all the trauma and abuse through forgiveness and once healed the Lord wants to bring them a true godly spouse that is actually from Him this time. He wants them to team up with a true believer who has also been healed from their wounds so that they can both together serve the Lord. They will both walk in the fruit of the spirit and be able to minister together in peace and love. They will have much fruit helping others who have been hurt and abused to get healed and be used by God. Understand that those who are not of the Lord will try to come against them because Satan hates true Kingdom marriages more than anything. They will tell them they can’t be remarried and must stay alone the rest of their lives. God is not in forcing a person to remain alone forever after enduring much abuse in their marriage. He wants them to be blessed with a godly marriage if that is what they want. He wants them to do His ministry together with a true godly believing spouse. So God is arranging ordained Kingdom marriages that are seeing much fruit helping others to get healed and delivered and doing His work together.

God’s first choice is always to get the unbelieving spouse healed and delivered and become a true believer but if they refuse to serve God then He is saying to pull away from those who are under Satan’s control in order to be able to do God’s assignment in freedom. So obey God and do what He tells you and do not listen to those who are the modern day Pharisees with evil in their hearts trying to force you to submit to an ungodly spouse who has no intentions to change and is being used by Satan to hurt you and stop you from God’s assignment. Choose to serve God and not the demons in anyone.