GOD USES THOSE THAT THE WORLD AND CHURCH MOCK

GOD USES THOSE THAT THE WORLD AND CHURCH MOCK

Moses had a speech impediment but led almost a million Hebrews to freedom from bondage to Egypt across the Red Sea and ultimately to their Promised Land. Gideon went from 22,000 people down to just 300 mighty men of valor to fight the Midianites and save Israel in Judges 7.  God used Samson, who the Philistines mocked, to kill 1,000 of them with a jawbone of a donkey and then after he was captured due to the help of Delilah and he was blind, God used him one last time to kill 3,000 of them by destroying the center pillars of their temple to their god Dagon.  God used a young boy named David to defeat the giant Goliath and the Philistines. God used Esther to save the Jews from certain annihilation from Haman.

Most who attended the Jewish synagogues were taught by the pious and religious Pharisees and scribes and they all hated Jesus because he was not taught by them.  Jesus called them vipers, white-washed tombs and evil because he knew their hearts were wicked as they did not have the fruit of the spirit. 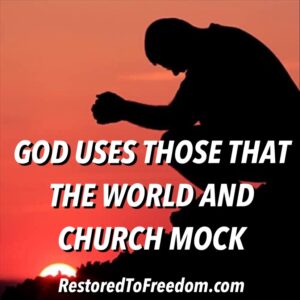 God used Maria Woodworth-Etter in the late 1800’s and early 1900’s whose first husband abused, betrayed, and persecuted her and refused to let her speak in the church.  She had to divorce him in order to obey God and do what He was calling her to do. She didn’t feel comfortable at first speaking before people and her oldest daughter was against her ministering. She lost 5 of her 6 children to death.  Then she remarried a godly man who helped and supported her named Samuel Etter and then she traveled all over America seeing people come to Christ and get healed. Fellow evangelist John Alexander Dowie used to ridicule her because she was a woman yet she was still doing ministry after he himself went insane thinking he was Elijah. Women were frowned upon to actually preach during her time yet God used her to minister to hundreds of thousands around the country helping them get saved and healed.

God used Kathryn Kulhman to minister around the world and she saw over 2 million people get healed.  God first approached several men to do the ministry first but they refused so God used Kathryn.

God loves to use His people to do things they never thought they could do.  God loves to use those who the world scoffs at, the church mocks and disdains, and that people in general would say were not qualified or educated enough, or that they sinned too much or were undignified,  yet God says when they have My heart, walk in humility, purity, righteousness, and are willing to obey Me then there is nothing that can stop them from accomplishing great things for the Lord.

He called me to help deliver His church from demons around the world but without a ministry degree yet gave me valuable personal experience to learn from.   He asked me to help people who were being abused by people in their marriages to give their abusive spouse chances to repent and get delivered but if they refused then they needed to separate and not allow their spouse’s demons to intimidate them anyone. And to tell them to stop making an ungodly spouse an idol before the Lord – trying to stop them from their calling in Christ and drag them to hell with them.  They needed to fear God and do what God wanted and not what their demonized spouse threatened them with (who would act like they were a Christian but with no godly fruit and no desire to repent and get right with God).

God is calling many, many more into helping get the church healed and delivered because it is a mess and you cannot have revival when most of the leaders are living in sin themselves. Sin leads to death and hell.  Obedience to the Bible leads to life and heaven.  It is not that difficult to understand except the Americanized church has been watered down preaching that grace allows people to keep sin in their lives and never need to repent for it and change.  Grace gives people time to repent for their sin so they can live a life with the same fruit as Christ. Most don’t read the Bible for themselves because if they did they would not stand for the preaching being done from the pulpit any longer.

15 What then? Shall we sin because we are not under law but under grace? Certainly not! 16 Do you not know that to whom you present yourselves slaves to obey, you are that one’s slaves whom you obey, whether of sin leading to death, or of obedience leading to righteousness? 17 But God be thanked that though you were slaves of sin, yet you obeyed from the heart that form of doctrine to which you were delivered. 18 And having been set free from sin, you became slaves of righteousness. 19 I speak in human terms because of the weakness of your flesh. For just as you presented your members as slaves of uncleanness, and of lawlessness leading to more lawlessness, so now present your members as slaves of righteousness for holiness.

20 For when you were slaves of sin, you were free in regard to righteousness. 21 What fruit did you have then in the things of which you are now ashamed? For the end of those things is death. 22 But now having been set free from sin, and having become slaves of God, you have your fruit to holiness, and the end, everlasting life. 23 For the wages of sin is death, but the gift of God is eternal life in Christ Jesus our Lord.

People have not been convicted for their sin.  But that is starting to change as more Christians are rising up to talk about the need for everyone to get their soul wounds healed and delivered from their demons.  God is exposing those who are living in sin in order to get their souls clean before Him. More people are realizing sin will lead them to death and hell. It is time for the church to wake up and actually obey what the Bible says and not what a lukewarm pastor who is ungodly and living a sinful life says.  God is looking for His people to obey His whole word, live a godly and pure life, walk in the fruit of the spirit and not of the flesh (Galatians 5:16-26).