ARE YOU CONVICTED WHEN YOU SIN?

ARE YOU CONVICTED WHEN YOU SIN?

The majority of all Christians have bought into the lies that grace covers their sins so that they can still get into heaven while sinning like the world. The purpose of grace is that it allows a person to live and not die immediately after we sin (like Ananias and Sapphira in Acts 5:1-11) while we pursue the sanctification process of getting our soul wounds healed, forgiving people who have hurt us like Jesus forgave, repenting for our pride and sin and obeying the Bible so we can actually have similar fruit of the spirit that Jesus did. You know…like a real authentic Christian.

“What then? Shall we sin because we are not under law but under grace? Certainly not! Do you not know that to whom you present yourselves slaves to obey, you are that one’s slaves whom you obey, whether of sin leading to death, or of obedience leading to righteousness? But God be thanked that though you were slaves of sin, yet you obeyed from the heart that form of doctrine to which you were delivered. And having been set free from sin, you became slaves of righteousness. I speak in human terms because of the weakness of your flesh. For just as you presented your members as slaves of uncleanness, and of lawlessness (sin) leading to more lawlessness (sin), so now present your members as slaves of righteousness for holiness. For when you were slaves of sin, you were free in regard to righteousness. What fruit did you have then in the things of which you are now ashamed? For the end of those things is death. But now having been set free from sin, and having become slaves of God, you have your fruit to holiness, and the end, everlasting life. For the wages of sin is death, but the gift of God is eternal life in Christ Jesus our Lord.” ‭‭Romans‬ ‭6:15-23‬ ‭NKJV‬‬

So it is obvious when you read this scripture that sin should be rare in a real Christian’s life and not common. A true Christian will have fruit of righteousness and holiness. So if a person continues to practice living a sinful life like the world every day after attending church for 20-40 years, what does the Bible say?

“Dear children, don’t let anyone deceive you about this: When people do what is right, it shows that they are righteous, even as Christ is righteous. But when people keep on sinning, it shows that they belong to the devil, who has been sinning since the beginning. But the Son of God came to destroy the works of the devil. Those who have been born into God’s family do not make a practice of sinning, because God’s life is in them. So they can’t keep on sinning, because they are children of God. So now we can tell who are children of God and who are children of the devil. Anyone who does not live righteously and does not love other believers does not belong to God.” ‭‭1 John‬ ‭3:7-10‬ ‭NLT‬‬ 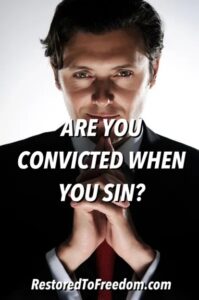 ‬ “For if we sin willfully after we have received the knowledge of the truth, there no longer remains a sacrifice for sins, but a certain fearful expectation of judgment, and fiery indignation which will devour the adversaries. Anyone who has rejected Moses’ law dies without mercy on the testimony of two or three witnesses. Of how much worse punishment, do you suppose, will he be thought worthy who has trampled the Son of God underfoot, counted the blood of the covenant by which he was sanctified a common thing, and insulted the Spirit of grace? For we know Him who said, “Vengeance is Mine, I will repay,” says the Lord. And again, “The Lord will judge His people.” It is a fearful thing to fall into the hands of the living God.” ‭‭Hebrews‬ ‭10:26-31‬ ‭NKJV‬‬

Sadly most Christians are being preached a message that is not what the Bible actually says. It is a watered down feel-good message certain to not offend any of the tithers so the church pastors and employees can enjoy living a life like the world. They live like the world during the week but try to act like a Christian on Sunday morning. They are like the Pharisees and scribes that Jesus spoke against and called out for their hypocrisy. And sadly most church attenders cannot arise above the pastor in their pulpit. So if the pastor is living a sinful life and preaching a message that never convicts anyone to pursue a life of righteousness then many are heading to hell with the pastor. We need to actually have the fruit of the spirit in our lives and not the fruit of the flesh like most Christians and even pastors sadly. If you are sexually impure, lust, masturbate, prideful, lie, gossip, angry, selfish, jealous and mean do you think you have much in common with Christ? Certainly not. And sadly most churches refuse to talk about deliverance or allow it in their church because the church leaders are all living sinful lives and don’t want their attenders to know.

“So I say, let the Holy Spirit guide your lives. Then you won’t be doing what your sinful nature craves. The sinful nature wants to do evil, which is just the opposite of what the Spirit wants. And the Spirit gives us desires that are the opposite of what the sinful nature desires. These two forces are constantly fighting each other, so you are not free to carry out your good intentions. But when you are directed by the Spirit, you are not under obligation to the law of Moses. When you follow the desires of your sinful nature, the results are very clear: sexual immorality, impurity, lustful pleasures, idolatry, sorcery, hostility, quarreling, jealousy, outbursts of anger, selfish ambition, dissension, division, envy, drunkenness, wild parties, and other sins like these. Let me tell you again, as I have before, that anyone living that sort of life will not inherit the Kingdom of God. But the Holy Spirit produces this kind of fruit in our lives: love, joy, peace, patience, kindness, goodness, faithfulness, gentleness, and self-control. There is no law against these things! Those who belong to Christ Jesus have nailed the passions and desires of their sinful nature to his cross and crucified them there. Since we are living by the Spirit, let us follow the Spirit’s leading in every part of our lives. Let us not become conceited, or provoke one another, or be jealous of one another.” ‭‭Galatians‬ ‭5:16-26‬ ‭NLT‬‬

So pursue soul wound healing and deliverance with all your heart. Forgive everyone who hurt you. Ask Jesus to show you all who hurt you from His perspective and you will learn that they were hurt and heard demons telling them to hurt you. Then forgive like He did. If we don’t forgive others for sinning against us then God won’t forgive our sins – which gives legal rights for demons to torment us. Matthew 6:14-15. Then repent for your pride and sin. Then command the demons to be gone from your soul to the pit. This is usually a process so don’t stop pursuing the process. You will be amazed how it feels as you get more and more healed and delivered as you will actually see the fruit of the spirit and righteousness regularly in your life instead of the fruit of the flesh and sin.