HOW TO DISCERN WITCHES IN THE CHURCH

HOW TO DISCERN WITCHES IN THE CHURCH

There are over 1.4 million witches who attend church in America every week. They look like you and me so are very hard to discern who is of the Lord and who is of Satan. They want to pray for you, lay their hands on you and know all the correct religious lingo to say. Some astral project into your homes so they can learn intimate details of your life and later tell you that the “Holy Spirit” showed them things about you to then cause you to think they are extremely in tune with the Lord. So how can you tell if someone is of Satan and not the Lord? 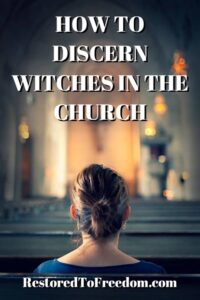 Matthew 24:24 New King James Version (NKJV) 24 For false christs and false prophets will rise and show great signs and wonders to deceive, if possible, even the elect.

When you are spiritually clean and pure and not in sin witches curses cannot affect you:

“Like a flitting sparrow, like a flying swallow, So a curse without cause shall not alight.” ‭‭Proverbs‬ ‭26:2‬

You can declare a divine restraining order against witches to protect yourself. Go to pages 7 and 8 attached here on my website: