Over the next three months God is going to finish disconnecting you from Satan’s wolves and goats who were disguised as God’s people and connecting you to God’s real sheep – His true righteous people in order to accomplish the plans that He had for you.

There are many who will have to move or have already moved in order to accomplish God’s plans for you. Moved to new apartments, homes, cities, states and countries. Many who have been pulling away from existing unhealthy relationships, toxic family relationships, false and deceptive people who have acted like sheep but were wolves and goats assigned by Satan to hurt you and stop you from accomplishing God’s plans for you, trying to derail you from God’s destiny and His destination. Many who have been moved or in the process of moving out of existing jobs with no hope, much stress and strife and unhealthy control by ungodly people and management into new jobs of blessings, peace, godly excitement, anticipation and some into full time ministry. All the suffering and sadness and mocking that you have endured in your life is being changed to peace, overflowing joy and honor.

I heard the Lord say “Your blessings and favor from the Lord are in these new “Promised Lands” where you will see great blessings with land and new property full of milk and honey flowing and healthy food aplenty waiting for you. Money flowing to you away from those who were not of Me. New sources of income and revenue from places you would never have thought of. There is life in these new changes out of the old, depressing chains of sadness. Just like Abraham had to move away from his family many of you will be moving away from your toxic families and former ungodly friends. Just like Moses had to help move his people out of bondage and slavery and abuse – I am moving you away from your abusers, and out of bondage to your freedom into your new families that are of Me.”

“Those who have consecrated their lives to true holiness and righteousness will be blessed and protected but those who have lived secret lives full of sin, sexual impurity, and pride will be exposed and brought down before the world. Many marriages where one has abused the other will see the abuser no longer being able to hide. Many relationships where one was controlling and abusing the other. Many in My church who are in pride who are hurting My children who have already been hurt. The abuser will be exposed publicly because they refused to humble themselves privately before Me. I will not be mocked any longer. You evil ones thought you could get away with your sin privately forever but no, time is up. Some of you will lose your lives (some already have). You have mocked Me and hurt My people greatly but the tables are now being turned. I am no longer allowing you to hurt My people as You will no longer be able to get away with the things you have done in secret. I am showing the world who you really are and you will see those who were truly of Me being blessed in such great ways that you will gnash your teeth in jealousy. I will humble you before Me.” 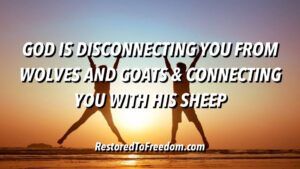 So watch to see as the next three months, September, October and November will usher in great and favorable changes in the lives of My people while those who acted like they were godly but were truly living for Satan will see great destruction in their lives.

And it is time for those who have been operating in the Jezebel spirit and witchcraft who refused to humble themselves and turn from their rebellious lives to come to great destruction including eternal.

75 We give thanks to You, O God, we give thanks! For Your wondrous works declare that Your name is near. 2 “When I choose the proper time, I will judge uprightly. 3 The earth and all its inhabitants are dissolved; I set up its pillars firmly. Selah 4 “I said to the boastful, ‘Do not deal boastfully,’ And to the wicked, ‘Do not lift up the horn. 5 Do not lift up your horn on high; Do not speak with a stiff neck.’ ” 6 For exaltation comes neither from the east Nor from the west nor from the south. 7 But God is the Judge: He puts down one, And exalts another. 8 For in the hand of the Lord there is a cup, And the wine is red; It is fully mixed, and He pours it out; Surely its dregs shall all the wicked of the earth Drain and drink down. 9 But I will declare forever, I will sing praises to the God of Jacob. 10 “All the horns of the wicked I will also cut off, But the horns of the righteous shall be exalted.”