HOW TO OVERCOME SEXUAL LUST

HOW TO OVERCOME SEXUAL LUST

90% of the thousands of people I have taken through healing and deliverance sessions have either been exposed to pornography, been exposed to nudity, touched sexually, experienced incest, molested, or raped prior to age 18. Most of them were currently struggling to live a sexually pure lifestyle when they came to me for a healing and deliverance session. 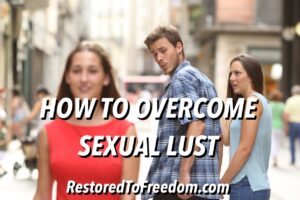 “Internet pornography is the new crack cocaine, leading to addiction, misogyny, pedophilia, boob jobs and erectile dysfunction” according to clinicians and researchers testifying before a Senate committee.

Witnesses before the Senate Commerce Committee’s Science, Technology and Space Subcommittee spared no superlative in their description of the negative effects of pornography.

“You have heard that it was said to those of old, ‘You shall not commit adultery.’ But I say to you that whoever looks at a woman to lust for her has already committed adultery with her in his heart.” ‭‭Matthew‬ ‭5‬:‭27‬-‭28‬ ‭NKJV‬‬

“Flee sexual immorality. Every sin that a man does is outside the body, but he who commits sexual immorality sins against his own body. Or do you not know that your body is the temple of the Holy Spirit who is in you, whom you have from God, and you are not your own? For you were bought at a price; therefore glorify God in your body and in your spirit, which are God’s.” ‭‭I Corinthians‬ ‭6‬:‭18‬-‭20‬ ‭NKJV‬‬

Then you should feel lighter and cleaner. Then any and all ungodly sexual relationships that you have had with other people state “I break off all ungodly soul ties and sexual covenants that I have made with anyone. I repent for all sexual sins that I have ever committed in Jesus name.” Then ask Jesus to heal you. Then command all demons to go to the pit in Jesus name.

“What then? Shall we sin because we are not under law but under grace? Certainly not! Do you not know that to whom you present yourselves slaves to obey, you are that one’s slaves whom you obey, whether of sin leading to death, or of obedience leading to righteousness? But God be thanked that though you were slaves of sin, yet you obeyed from the heart that form of doctrine to which you were delivered. And having been set free from sin, you became slaves of righteousness. I speak in human terms because of the weakness of your flesh. For just as you presented your members as slaves of uncleanness, and of lawlessness leading to more lawlessness, so now present your members as slaves of righteousness for holiness. For when you were slaves of sin, you were free in regard to righteousness. What fruit did you have then in the things of which you are now ashamed? For the end of those things is death. But now having been set free from sin, and having become slaves of God, you have your fruit to holiness, and the end, everlasting life. For the wages of sin is death, but the gift of God is eternal life in Christ Jesus our Lord.” ‭‭Romans‬ ‭6:15-23‬ ‭NKJV