WOUNDED PEOPLE PROVOKE OTHERS TO STEAL THEIR PEACE

WOUNDED PEOPLE PROVOKE OTHERS TO STEAL THEIR PEACE

When we get hurt and wounded growing up and aren’t able to forgive those who hurt us from our hearts then we will trigger on our current relationships. We will overreact, get angry, feel jealous, act like we are the victim, behave in ungodly ways, and then provoke and blame our spouse, children or others closest to us. Demons will give us thoughts to provoke people to cause them not to have peace and in order to get a reaction out of them. People who provoke others want their targeted victims to get angry and respond back in more hostile words or behaviors so they can point their finger at them and blame them instead of taking responsibility for initiating the attack. It allows them to have a level of satisfaction of controlling them to get them to lose control of their emotions and then blame them. The demons within them want the initiator of the attack to never admit that they started the fight and were the aggressor so then they can blame the responder for their reaction and portray themselves as the victim.

Many who respond are exasperated because the initiator of the attack make statements that hurt them as it feels like Satan himself is speaking to them because they know exactly what to say to hurt them deeply. Satan is the accuser of the brethren and people who are unhealed of their wounds will accuse you often of the same words the demons are feeding them in their heads. Of course the best response to someone accusing you or provoking you is no response. It is very challenging as it takes extreme strength to “take” that verbal assault and say nothing in return especially after hearing 30 minutes or more of it. Jesus was a model for us.

“Now Jesus stood before the governor. And the governor asked Him, saying, “Are You the King of the Jews?” Jesus said to him, “It is as you say.” And while He was being accused by the chief priests and elders, He answered nothing. Then Pilate said to Him, “Do You not hear how many things they testify against You?” But He answered him not one word, so that the governor marveled greatly.” ‭‭Matthew‬ ‭27‬:‭11‬-‭14‬ ‭NKJV‬‬

So if you have a relationship with a person who loves to provoke you to anger what should you do? 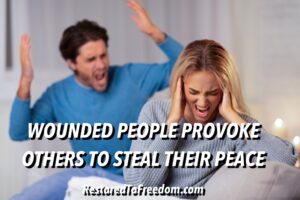 – Walk away from them so they cannot torment you in their presence and then pray for them, binding the demonic spirits causing them to attack you. Tell them you are going to pray so they know you will come back when they are calm. Then once they have calmed down you can come back together as long as they don’t try to attack you again. – Be careful not to respond to them during the time of separation even if they call or text you as their demons want to bait you into a response.

If you respond you will often lose control of your emotions and then they will continue to accuse and provoke you until your anger rises like hot water boiling out of a teapot. Then once you blow up at them they will remind you over and over again of your bad behavior acting like they are the innocent victim when they were actually the aggressive provoker.

‬‬ “But avoid foolish and ignorant disputes, knowing that they generate strife. And a servant of the Lord must not quarrel but be gentle to all, able to teach, patient, in humility correcting those who are in opposition, if God perhaps will grant them repentance, so that they may know the truth, and that they may come to their senses and escape the snare of the devil, having been taken captive by him to do his will.” ‭‭II Timothy‬ ‭2‬:‭23‬-‭26‬ ‭NKJV‬‬

“Fathers, do not provoke your children, lest they become discouraged.” ‭‭Colossians‬ ‭3‬:‭21‬ ‭NKJV‬‬

“And you, fathers, do not provoke your children to wrath, but bring them up in the training and admonition of the Lord.” ‭‭Ephesians‬ ‭6‬:‭4‬ ‭NKJV

“It is better to finish something than to start it. It is better to be gentle and patient than to be proud and impatient. Don’t become angry quickly, because anger is foolish.” ‭‭Ecclesiastes‬ ‭7‬:‭8‬-‭9‬ ‭ERV‬‬

God holds those who provoke people responsible and they will experience consequences for their actions. They often have such torment in their minds from demons that they never experience any peace. Their demons try to destroy all peace in their victim’s lives so they aggressors often lose all close relationships over time.

So ask the Lord to help you not to take their bait of provocation and stay calm and avoid close contact with those who constantly want to attack you.

One Reply to “WOUNDED PEOPLE PROVOKE OTHERS TO STEAL THEIR PEACE”